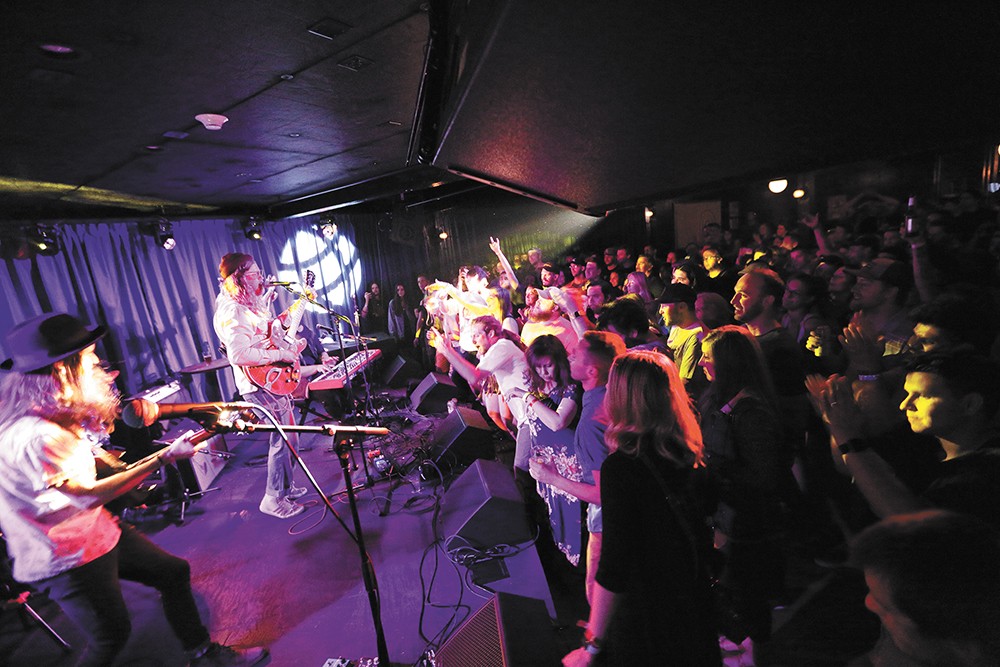 Young Kwak photo
Lucky You Lounge is closed and all concerts through the end of April have been canceled.

Public spaces across the U.S. have become eerily quiet and dark. No one can guess for sure when they'll come back to life.

On Sunday Washington Gov. Jay Inslee announced updated measures to prevent the spread of the coronavirus: All gatherings with more than 50 participants are prohibited until further notice, while events with less than 50 people are prohibited unless public health safety measures were previously enacted. Restaurants, entertainment and recreation venues are also temporarily closed to customers with no known date for a return to normal business hours.

The Inlander is working to keep our calendar of community events updated to reflect local cancellations and reschedules as soon as we hear of them. To see what's been canceled or postponed so far, visit inlander.com/events and enter "canceled" or "postponed" into the event search bar.

For those looking for something to do while the kids are home from school, please note that some of the more than 1,200 events in our online calendar may have been canceled without us being informed. In the event you see something not marked as canceled, check with the organizer or venue before leaving the house. It's a pretty safe bet that almost everything's been postponed until at least the end of March.

Event organizers who need to note future cancellations, date changes or other details for an event should email our events account, getlisted@inlander.com. We will update information as soon as possible.

While many venues have canceled events scheduled through the next month, others have already announced rescheduled dates.

Cher's Spokane tour stop previously set for May 2, for example, has moved to Oct. 10. Although the Fox Theater is closing until April 10, attempts will be made to reschedule all affected events, including three Spokane Symphony concerts.

In addition to large concerts, closures of public spaces have also impacted smaller-scale programming, like services at area libraries, and including the following public spaces:

Closures of all Spokane Public Library branches remain in effect until at least April 13.

Branch operations for the Spokane County Library District are suspended through April 24. Due dates for any items currently checked out are extended, and accrued late fees waived.

Spark Central, the education center in Kendall Yards, is closed through April 24, and all programming is suspended.

The Coeur d'Alene Public Library is closed until further notice, but is allowing patrons to place material holds for curbside pickup. Due dates and overdue fees are suspended.

The Whitman County Library system is closed until further notice. Patrons can check out materials to be delivered by mail, and can access library wifi from branch parking lots.

Libraries of Stevens County remained open as of Monday, but are only allowing in-and-out privileges, with no computer access or programs. Library-provided wifi is accessible to users in the parking lot.

Auntie's Bookstore has canceled several upcoming readings, but remains open. Customers can place orders over the phone for curbside pickup or online for delivery by mail.

Gonzaga University has closed the Jundt Art Museum, currently showing two exhibits, and is postponing the start (new date TBA) of the traveling exhibit Americans and the Holocaust, originally slated for March 19-April 24 in the Foley Library.

Ignite Community Theatre is postponing the remainder of its 2019-20 season, which includes performances of The Unexpected Guest and All My Sons.

Richmond Art Collective is suspending gallery hours until further notice, and is rescheduling its grand reopening from May 2 to May 17.

Spokane Civic Theatre is suspending performances of all productions through at least March 31, but plans to reschedule affected shows, including Cabaret, The Humans, Exile and Funny Girl.

In Moscow, the Kenworthy Performing Arts Center is closing through April 9, affecting performances and film screenings.

While much of April's First Friday details have yet to be determined, expect much of the art showcase to move from a downtown crawl to an online virtual tour. Spokane Arts' planned opening reception at Chase Gallery will instead be the centerpiece of "Virtual First Friday."

All upcoming events at the Jacklin Arts & Cultural Center in Post Falls, including cooking classes and concerts, have been canceled.

Lucky You Lounge is closed and all concerts through the end of April have been canceled.

The Knitting Factory has canceled or postponed several concerts on its calendar through May 7. Some shows are being rescheduled; see the latest at sp.knittingfactory.com.

All movie theaters are suspending operations until further notice, including AMC River Park Square 20, the Northtown and Spokane Valley Regal Cinemas locations, and the Village Center Cinemas in Wandermere and Airway Heights. The Garland Theater and Bon Bon bar inside are closed through at least March 31. The Magic Lantern Theatre is also closed.

The 50 Hour Slam film competition, originally set to kick off March 20, is now being postponed to April 17.

The Kalispel Tribe of Indians is closing its facilities for at least two weeks, or until the end of the month, including Northern Quest Resort & Casino, Kalispel Casino, Kalispel Golf & Country Club and Fatburger restaurant at Five Mile.

Until the ban on restaurants and bars offering dine-in service is lifted, consider any weekly trivia nights, open mics and bar games listed in our online calendar as effectively suspended.

Mt. Spokane Ski & Snowboard Park has suspended all operations for what is likely to be the remainder of the season. ♦

The original print version of this article was headlined "Cancellation Chaos"

Major thunderstorms heading our way, with potential for baseball-sized hail, flash flooding and even isolated tornadoes

Taste of the Town virtual series connects chefs, winemakers with customers as Phase 2 rolls out