The Quest for Glory

As someone who has played in Hoopfest every year for nearly two decades, I've come to realize there are certain things about the weekend I can always count on.

There will always be that one pop song that is played over and over, until you think it's the only thing you'll ever hear again.

I will never, no matter how big a cooler I have, bring enough water.

The horde of people silent during the national anthem before the first game will always send chills down my spine.

Inevitably, a player on another team will want to punch me in the face after I argue with him because he called a foul that really was not a foul at all, and he's just mad because he can't score on me.

Another thing that seems to happen a lot is that on Sunday, I will leave disappointed that I did not win my bracket that year, but I will think, we'll win it next year.

My team has won Hoopfest before, two years in a row, on the 8-foot baskets when I was just barely old enough to play and our jerseys were shirts that fell to our knees. We named the team the Jaguars, because I thought jaguars were pretty cool at the time. (My dad was the coach, so everyone else obliged.) We were even on the news once. One of my teammates saw the news lady wandering around before our championship game and suggested she do a story on us. We won the year before, and were on the verge of winning again, so she did a nice little feature. She asked me on camera why I thought our team would win that year, and I said we would win because we won last year. We understood the moment. We weren't nervous. We, not the other team, would be poised under pressure. 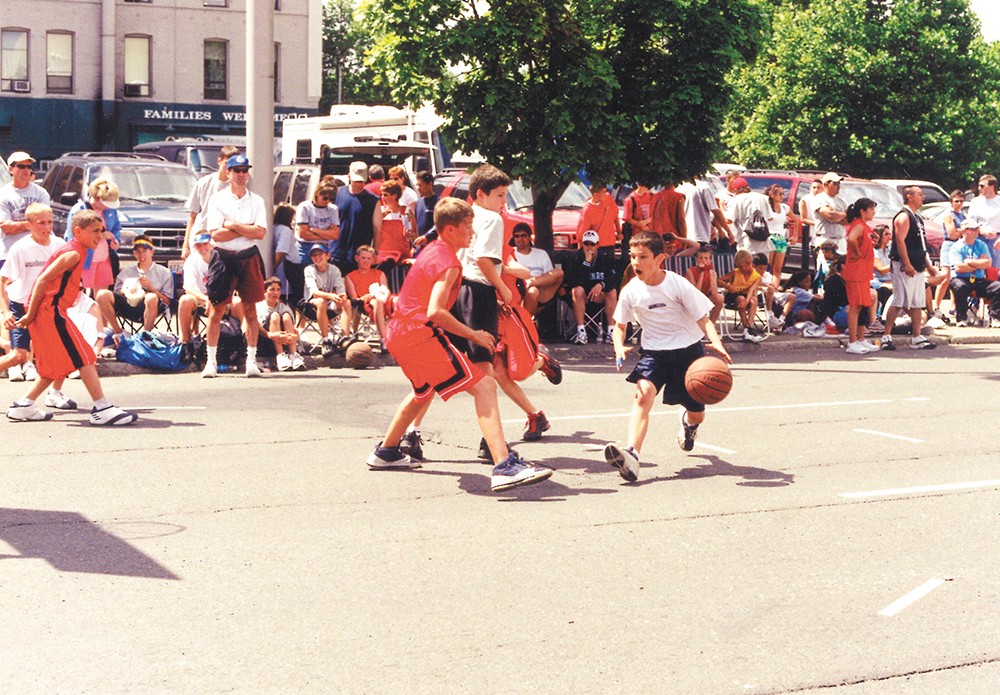 The television broadcast cut me off after, "I think we'll win because we won last year." I remember watching it, complaining that the TV news failed to capture the complexity of thought that went into the answer. When the segment was over, the TV anchors were talking about how cute we were, these little kids who take Hoopfest so seriously. One of them made a joke about us being the "future Zags." I didn't take it as a joke. Maybe, one day, it would be true. Maybe, if I work as hard as I can, I'll be a star. I'll be the next Dan Dickau. I'll go to the NBA.

I didn't really reach the peak of my basketball powers until college, though it didn't really matter at that point. I went to Eastern Washington University and spent a lot of time there playing basketball. Not on the team, of course, but in the rec center, with the other guys who used to be OK in high school. By 2013, I was fairly confident that one of my two teams would win their bracket. But then three days before the big weekend, I was practicing at the park against some high school players. One of them tried to do a spin move and ended up spinning the back of his head into my face, breaking my nose.

I bought a mask to protect my face and played in Hoopfest anyway. People walked by my courts and made remarks about the dude playing Hoopfest with a mask on. Was it really worth it? I could imagine them asking. My mom took a picture of me in a defensive stance, intensely looking through the mask at a guy much taller than me. I put the picture on Instagram and tagged Kobe Bryant, adding #maskedmamba, #mambaarmy, and #hoopfest. It was all pretty regrettable. My teams did well, but no championship shirts that year.

Michele Criscione
The author with his championship-winning Jaguars (left) and his daunting nose guard.

In 2015, I was living in Bellingham and working for the newspaper there. It was a year when I was especially grateful for the familiarity of Hoopfest. My girlfriend, now my fiancée, still lived in Spokane, and every other weekend one of us would drive across the state to see the other. Going back and forth all the time was exhausting. When Hoopfest came around, however, it was all the same — the music, the crowds, the competitiveness, the fantasy that there was some similarity between me and my favorite NBA player (Steph Curry, at that point). I was on two teams again, but this time the courts were on opposite sides of town, and it was the year it was, like, 110 degrees. That was also exhausting. One of my teams made the championship, but ultimately we just ran out of gas and lost.

I still haven't found the Hoopfest glory I had when I was 9 years old, when the four of us were kings of the court, even if it was only one court out of hundreds, and even if it didn't mean much to anybody else.

These days, I've found there's another thing I can count on. When I tell people about playing Hoopfest, many will scoff at the idea. Why? they will ask. It's too crowded, too hot. It takes over downtown. The players are too intense, competing their overzealous little hearts out over a T-shirt that they will wear maybe twice in their life.

To all of that, I would say they are correct.

HOOPFEST BY THE NUMBERS

Number of games played over the Hoopfest weekend

Players and fans expected for Hoopfest 2017

Volunteers helping to put on Hoopfest

Amount that the Ignite Basketball Association, Hoopfest's charitable collaboration with Spokane Public Schools, has donated to local charities since 1990