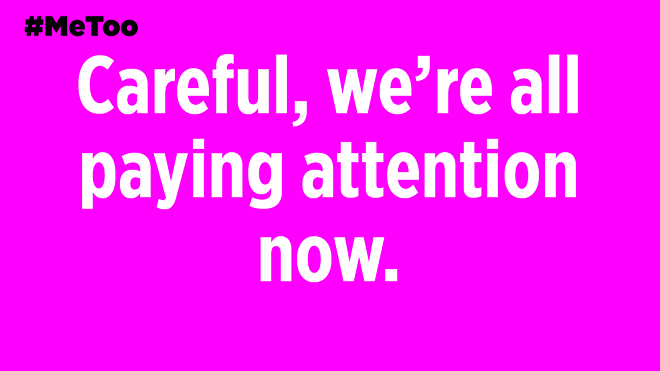 Since the horrific revelations of the past several months

began unfolding, and as we watch the nightmare continue, I've suddenly become hyper-aware of how even the slightest interactions with some men are intrinsically linked to this present culture of sexism, misogyny, racism and power imbalance.
click to enlarge

Born and raised in the Inland Northwest, Chey Scott has been with the Inlander since 2012. She edits the food and events sections, and also writes about arts and culture.

To preface my recent experiences, however, I want to emphasize that the following examples are relatively "tame" in comparison with the horrific accounts of sexual abuse and harassment from countless women. But to fix this, we all need to share and call out even the tiniest of these gross behaviors. At any level, it all props up acceptance and ignorance.

So here I am. I'm angry and sad with all of you; for all of us. Because I'm confident from both of the following interactions — not to mention a lifetime of catcalls, lewd "jokes" and requests to "smile, honey" — that the men acting this way don't see their attitudes and actions as being directly part of this problem we're facing. Careful, we're all paying attention now.

I was recently attending a professional social event, and was introducing myself to an older man there. In response to my self-introduction as the food and events editor for the Inlander, the man said, in authentic surprise: "Oh, you're so thin for a food editor!"

Despite that this verbal observation by him was intended to compliment my petite figure, I couldn't shake the utter creepiness of the fact that, upon first meeting this individual, he found it appropriate to directly remark on my physical appearance as a female, and relate it to my profession and my ability to do said job.

Another person (also a man of an older generation) later asked why I'd been offended. Here's why: It's not ever OK to comment on women's bodies in a manner like this, even if you think it's a compliment or a benign thought. This man whom I'd literally just met decided to physically — maybe even sexually — objectify me, directly to me.

The second scenario: I was enjoying a beloved hobby of mine, playing the nerdy card game Magic: The Gathering. It happened to be during an event I was hosting for my local playgroup, formed with the intent to create an accepting and safe environment for all players, regardless of gender, race, appearance, sexual orientation, age, etc., to play this male-dominated game that frequently struggles with toxicity and harassment of not just women.

I found myself winning a match against another guy, when that player's friend, also male, came over to watch. It was all fine until the friend began chiding my opponent by making comments comparing him to a girl ("Did you just spray some perfume, because you smell pretty.") and then saying, "Wow, she's deceptively good."

I immediately knew that even disguised as a compliment he actually meant it's not expected, or widely accepted, that I'd be "good" at the strategic fantasy game because I am one of its few females who feels comfortable leaving the safety of my home to play Magic in a room full of men. Yet, I also knew this guy didn't realize his comments were insensitive and misogynistic. Not wanting to distract myself from the game at hand or be "dramatic," I didn't say anything.

This isn't the first, nor will it be the last, time that I or any other woman in a male-dominated hobby — be it sports, games or anything else — will be subjected to this brand of passive sexism. To call out such behavior, though, is to risk ostracization, or worse (remember GamerGate?).

compared to the chorus of female trauma demanding justice alongside me. Still, I shared these two moments within my social media circles, and the supportive responses were encouraging. Other women I know and respect came forward with advice, understanding and equally outrageous examples of their own:

"The small things do matter," said one.

"The little comments are super annoying and unfortunately, part of everyday life for women," chimed in another.

"The more we speak up and speak out, the more we learn from each other, and the more men check themselves and each other," wrote another. ♦