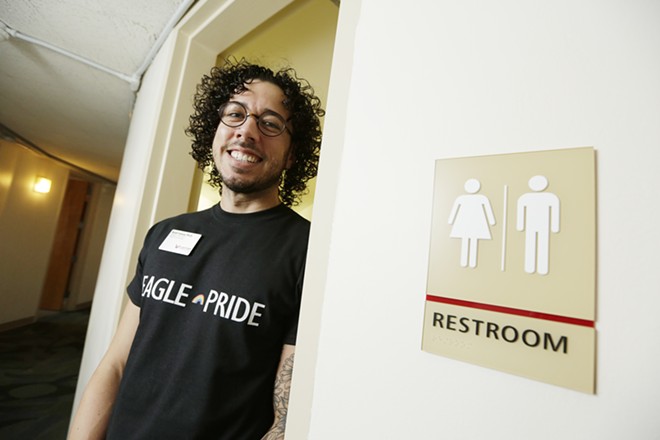 In the bathroom, Schee would go to take a shower and get strange looks. Schee identifies as nonbinary — neither male nor female. Living in a space designated for women never felt quite right. But EWU didn't really have any other options at the time.

Starting this school year, EWU is ready to open its first ever gender-inclusive housing floor. And Schee is the first EWU student to live there.

"It makes me feel so included," Schee says. "I feel like there's a space for me and people like me, who don't fall into the typical male or female gender."

Despite the Trump administration rolling back federal guidelines designed to protect transgender and gender-nonconforming students from discrimination, colleges across the country like EWU are pushing forward with new accomodations to make those students more comfortable on campus. That includes opening gender-inclusive housing, bathrooms and allowing students to go by a name on university documents that may be different than their legal name.

And at Washington State University, starting this year, menstrual products can be found in some men's restrooms for transgender students who may need them. The university is also creating a webpage showing information about gender-inclusive restrooms, locker rooms and other facilities, part of a new initiative to improve campus culture and climate.

A year ago, Schee stood in the middle of EWU's campus among dozens of transgender students and supporters. They looked like they were ready to take a shower, wearing shower caps and holding shower caddies and bath towels.

They demanded more gender-neutral showers on campus besides the showers in Patterson Hall, an academic building that would be unrealistic for many students to use.

It got the attention of the college administration, says Nick Franco, an EWU instructor and the manager of the EWU Pride Center.

"That prompted a conversation," Franco says.

Making accommodations for transgender students can be crucial to their success in college. Incoming transgender students report poorer emotional health when compared to their peers, according to an analysis by the Association of American Colleges and Universities (AACU). They're more likely to be depressed, and they're more likely to be unemployed or homeless. The AACU recommends that colleges and universities not only create nondiscrimination policies that specifically include gender identity and expression, but also adopt policies that protect the right of students to access the locker, changing or restroom facilities designated for their gender identity. Gender-inclusive facilities should be available in every building, the AACU says.

In 2016, the Obama administration sent a "Dear Colleague" letter to schools that guided them to provide facilities that are consistent with their gender identity. Those are the guidelines that the Trump administration rolled back a year later, giving states and districts more flexibility in their interpretation of the law and how to accommodate transgender students.

The EWU administration discussed adding housing and restrooms that were gender inclusive for years, says Michelle Schultz, the school's assistant director of apartments and facilities operations.

Many colleges and universities, including EWU, already have housing options like suites, where a few students are in one pod. Those can be gender neutral, but they're often more expensive. It's more rare to designate an entire floor in a residence hall for gender-inclusive housing that includes one shared bathroom and shared living area.

"In years past this has been brought up, but it's always been difficult to get students to actually sign up for it," Schultz says.

The demonstration last fall brought it back to the forefront of the college administration's attention. And a university survey indicated that, indeed, hundreds of students would use such a space. 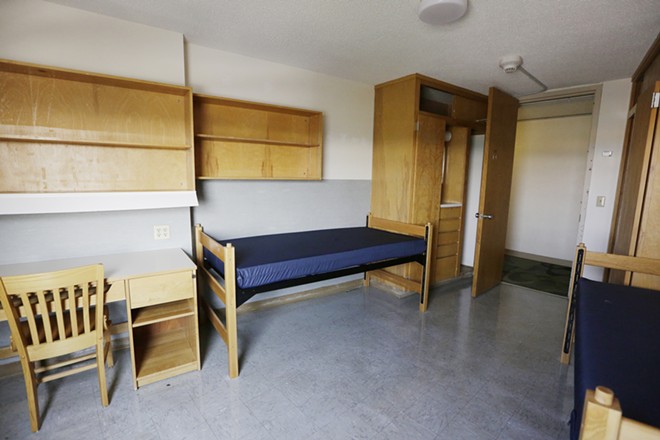 The university decided to open up a floor of Dressler Hall for gender-inclusive housing. In the floor's single bathroom, the shower stalls are private. Each stall also includes a private changing area.

When applying for housing, students just have to indicate they're interested in gender-inclusive housing, and the university won't take gender into consideration when assigning rooms.

So far, the dorms are already full, with 22 students signed up and more on the waitlist.

"This is something that is quite unique," says Franco.

And Schee, who a year ago was holding signs and wearing shower caps demanding such a facility, will be the community advisor overseeing the students on the floor.

"For me, it's just a lot more affirming of my identity," Schee says. "I don't want to use a restroom facility that doesn't match my identity."

In June of 2017, responding to concerns from students, staff and faculty, Washington State University president Kirk Schulz announced a new initiative to improve campus culture and climate. From that initiative, the Gender Inclusive & Trans* Support work group was created. The group is behind the initiative to put menstrual products in the men's bathroom and the list of gender-inclusive restrooms on campus.

"That's what our students have asked for," says Matt Jeffries, director of the Gender Identity/Expression and Sexual Orientation Resource Center. "And we're like, 'Yeah, we can totally do that.'"

Making a campus more welcoming for trans students goes beyond housing and restrooms. Franco, with the EWU Pride Center, says the fact that EWU actually has a Pride Center is huge, for one. It lets LGBTQ students socialize and coordinate ways to create a more inclusive environment.

Secondly, EWU has a policy that allows students to apply to go by a preferred or chosen name in university documents, instead of a legal name. Imagine a transgender student who goes by Michelle, but who is legally named Michael. When a professor reads a class roster outloud on the first day of the quarter, they'll avoid saying "Michael," which would misgender and likely embarrass that student. Last year is the first full year that policy was in place for students, Franco says.

Schee says it's all a step in the right direction. And it's particularly encouraging, Schee says, when a university takes those steps when "maybe our government is taking some steps back."

"I try to focus on my personal community," Schee says. "I know I can make change within my community." ♦