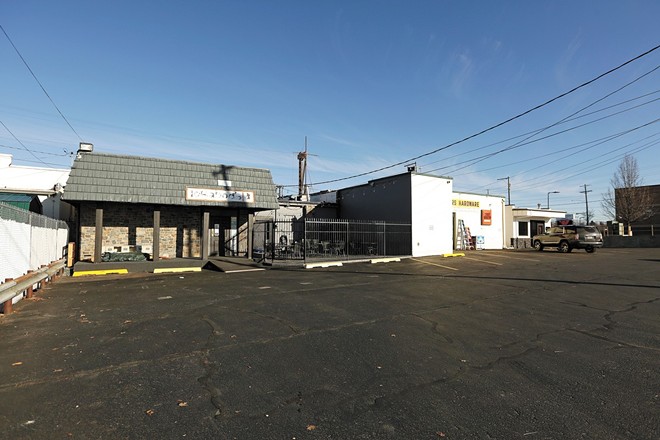 Young Kwak photo
The parking lot of Ichabod's East, a bar in Spokane Valley, where Daniel Jarman was knocked down and beaten.

More than a year after Army veteran Daniel Jarman was beaten and left to die outside of a Spokane Valley bar, his killer still has not been charged with any crime.


Spokane County prosecutor Larry Haskell told the Inlander last month that "the evidence supported a likely mutual combat or self-defense scenario," adding that the law is "very generous to one who claims self-defense." He added that prosecutors must assess possible credibility issues with the case. "A decline decision will not foreclose a future prosecution should additional evidence come to light," Haskell says.

That's not good enough for the Jarman family, however. In their mind, there is enough evidence already to charge the suspect identified by investigators, Jamie Peterson. That's why Jarman's sister, Jami Humphries, started an online petition this week that has so far gathered 138 signatures as of this writing. She hopes it will put pressure on Gov. Jay Inslee's office to look into the case. Without Spokane County prosecutors reopening the case, Inslee's office may be the family's only hope.
"I will do whatever it takes to get justice for my brother," she says.


The investigation was detailed in an Inlander cover story last month. Detectives with the Spokane County Sheriff's Office initially arrested the wrong man, Joe Riley, based on the word of two witnesses who used Facebook to mistakenly identify him. Spokane County prosecutors had charged Riley in connection to Jarman's death, before releasing him weeks later when detectives realized the mistake.

But later, when evidence pointed to Peterson, prosecutors cited self-defense. It's not clear why, since Peterson himself never made that claim. He only told detectives he wasn't there at the time of the altercation despite the evidence otherwise.


The decision not to charge was made by two senior deputy prosecutors, Haskell says. Last month, Haskell did not respond to an Inlander question asking what new evidence suggested it was self-defense. There does appear to be a mechanism for the state to get involved, says Brionna Aho, a spokeswoman for the state attorney general's office.

The fatal beating took place outside of Ichabod's East, a bar in Spokane Valley, around 2 am on Dec. 29, 2019. A choppy surveillance video of the incident shows two men — Jarman being one of them — getting out of the backseat of a car. It appears to show the other man lunge at Jarman and throw a punch before both fall out of the frame. There were two women in the car, and one of them described seeing that punch knock Jarman out before his attacker "wailed on his face" at least a dozen more times, according to court records.

Those two women didn't initially know who the attacker was, but days later they told detectives it was Joe Riley, based on what he looked like on Facebook. Then, weeks later — after Riley had been arrested and charged — they corrected themselves and reported that the suspect wasn't Riley, it was Peterson, who happens to look very much like Riley. Peterson's father is Lee Peterson, a personal injury attorney with Craig Swapp & Associates.


The evidence supports their assertion that Peterson was the one who attacked Jarman. A third witness told detectives that they saw Peterson standing over Jarman saying something like, "He wanted to start shit, he wanted to keep running his mouth." DNA evidence proved Peterson was in the car that the two men were seen getting out of before the beating. And phone records placed Peterson in the area around Ichabod's at the time of the incident.


In light of that evidence, the detective on the case, Marc Melville, recommended that prosecutors pursue charges of second-degree manslaughter against Peterson. In doing so, Melville noted that witnesses described Jarman as being "wasted" the night of the altercation.

"These circumstances should have caused a reasonable person to be aware of the substantial risk that, should a fight occur, a person could fall to the ground and strike their head on the pavement, potentially leading to their death," the affidavit said. "There did not appear to be a justifiable reason for Peterson to exit the vehicle and engage in a fight with a very impaired Daniel."

Instead, the case was closed when prosecutors declined to charge.

Humphries says she's going to make sure her voice is heard. She refuses to let people forget about her brother.

"I'm not going to give up, and I really feel that's what everyone is hoping will happen — like if they push me aside long enough, I'll forget about it," she says. "That is definitely not going to happen."