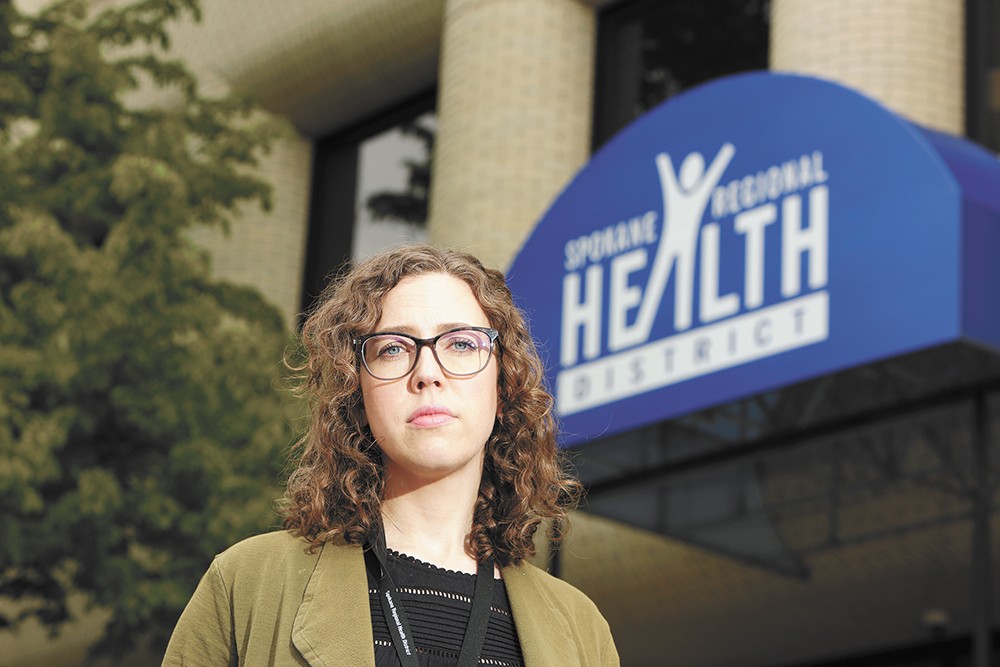 Short of a vaccine or treatment, there's still one weapon that epidemiologists like Anna Halloran have against the coronavirus: contact tracing.

It involves identifying those who may have been exposed to the disease and urging them to isolate and prevent further spread. And now, as the region prepares to slowly reopen, Halloran will have an army of contact tracers behind her to help in the fight.

As a condition to moving to phase two under Gov. Jay Inslee's reopening plan, the Spokane Regional Health District this week says it has roughly 75 contact tracers available should they be needed for contact investigations. And through a partnership with Eastern Washington University, they hope to add 20 more student volunteers to help with contract tracing by June, and up to 50 by July.

The state of Washington, too, announced last week that it's ready to deploy more than 1,300 contact tracers.

It's a weapon the health district feels comfortable wielding against other diseases like hepatitis A, measles or for STDs. For COVID-19, contact tracers will call you if you've spent more than 10 minutes in close proximity — less than 6 feet away — from someone who tests positive.

"We want to identify individuals [who have the virus], identify the contacts, treat it and prevent it from spreading," says Spokane Regional Health Officer Bob Lutz. "That's what we call boxing in the virus."

Only with coronavirus, it didn't take long for health officials to realize they needed a bigger box.

In early March, Lutz knew the coronavirus had already invaded Spokane. The problem was that he didn't know where it was.

"Early on, we sort of joked sardonically that we needed a case," Lutz says. "Until we actually had confirmed cases, nobody believed that COVID-19 was actually in Spokane."

Not only that, but it stripped public health officials of the ability to conduct case investigations. If you don't know where the virus is, it's impossible to track down where it's going to go. Part of that had to do with the lack of testing resources available, he says.

"Had we the resources, the ability to test more broadly, which we weren't able to do, then we could have jumped on this a bit more aggressively," Lutz says.

That meant Halloran and a team of several other Spokane Regional Health District epidemiologists were playing catch-up in their contact tracing. They typically have five epidemiologists on staff, with three working full time. In March, that small team started off doing all those contact investigations themselves.

It was manageable in mid-March, after the first case was confirmed on the 14th of the month. But 10 days later, when there were 20 cases a day coming in, they were overwhelmed, Halloran says. Tracking down the contacts of a single case, and calling each one and urging them to quarantine, can take several hours.

"It started to become too much for us to handle," Halloran says.

Around that time, the Washington State Department of Health offered to help local jurisdictions across the state. Spokane took advantage of that, but it wasn't enough. Instead of calling each contact of a person with a confirmed case, case investigators had to simply tell a person who tested positive to call people they may have exposed and provide advice to quarantine, Halloran says. Without enough contact tracers, sick people would be the one advising each contact instead, using recommendations from the health district.

Halloran says those contacts often lacked access to testing, because they may not have met the criteria at the time due to lacking resources. Those exposed to a confirmed case were instead treated as a "probable case."

That's why the confirmed cases, she says, don't give a full picture of community spread. What gets reported to the health district are confirmed cases, or the "tip of the triangle," Halloran says. Under that tip are people who sought medical attention but didn't have a test ordered even if they may have had COVID-19. Under that are other people who were sick and didn't get medical attention, and then still more people who may have been asymptomatic.

The health district knew they needed more people to do contact tracing work. They pulled disease investigators within the STD program and other staff. But it took a while to get everyone trained on what they were asking for with COVID-19, Halloran says.

Still, Spokane never quite saw the surge in cases many were expecting. By May, case counts were on a downward trend. And the health district put together a contact-tracing team consisting of more than a dozen disease-investigation specialists. Testing capacity began to improve simultaneously, and on May 12, health officials revised the testing criteria to reflect that. Now, all people with symptoms are to be tested, and close contacts of confirmed positive cases should get tested, too, whether they have symptoms are not.

This week, however, the region was told that in order to be approved to move into the next phase of reopening, Spokane County needs 15 contact tracers on hand for every 100,000 citizens, which translates to at least 75 contact tracers overall. Lutz says to meet that criteria in the short term they pulled current staff within the health district, including those who would normally be doing restaurant inspections, to be contact tracers. With the case counts Spokane currently has, however, they likely won't be needed before the student volunteers come on board next month.

With all those contact tracers, even though new cases are sure to emerge as Spokane reopens slowly, Lutz feels more confident about containing the virus.

"Having that team available definitely is going to be an essential piece moving forward," Lutz says.

Last week, when the health district shared its plans for contact tracing moving forward, Lutz and Halloran were hit with questions about privacy. Halloran stressed that contact tracers are bound by the same privacy laws as a health-care provider.

"I completely understand the sensitivities people have around confidentiality, but this is a confidential service we're offering to try to help mitigate this disease," Halloran says.

David Line, program director for EWU's public health program, says having students involved was an initial concern for that very reason. But that's why students will go through the training. The students need to understand first how health systems work and how to use medical terminology. And secondly, they must understand confidentiality by the end of the training.

"That's something we drive home and practice and work on," Line says.

The epidemiologists will create the list of contacts that a person with COVID-19 may have exposed, and the student volunteers may be the ones to call those contacts and advise them to quarantine for two weeks while providing information on how to get tested.

"It's going to be very scripted going forward," Lutz says.

Line estimates that student volunteers could call up to 500 people who have COVID-19 per week. So far, Spokane hasn't reached 500 confirmed cases in two months.

"We can prevent all the contacts and the could-be cases from spreading the disease, and therefore we just put a cap on it."

"We can prevent all the contacts and the could-be cases from spreading the disease, and therefore we just put a cap on it," Line says.

And that is how to prevent further community shutdown orders. Before, without testing and contact tracing, public health officials had to assume everyone in the community might have had the coronavirus. If they know where the virus is, then the whole community doesn't have to shut down.

Line likens the stay-home orders to a snowstorm. We just went through a two-month storm, where everything got shut down because of something we'd never seen before.

"What I expect is going to be small snow squalls — isolated patches that are going to continue to occur," he says. ♦


Editor's note: This story has been updated from its original version to include new information on Spokane's reopening.

The original print version of this article was headlined "Boxed In"