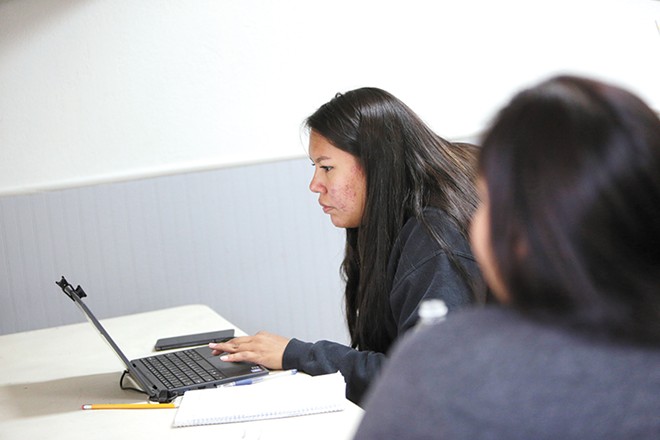 As a single mother of five, Miranda Murinko could use some relief. She and her five kids live in a homeless shelter operated by Family Promise of Spokane, and even though she qualified for a housing voucher, she doesn't have much time to look for a permanent home. Instead, she helps her two oldest kids, 7 and 4, navigate a virtual classroom — mostly by muting and unmuting the computer when needed.

It would be nice, she says, if her two school-aged kids had somewhere to go while attending virtual school.

"That would help me tremendously," she says. "Because I don't get much done as it is right now."

With Spokane Public Schools and many other area schools opening the school year with online learning, parents are desperate for some help guiding kids through the virtual classroom. While some parents have joined together to form learning pods — small groups of students who gather together for virtual learning — school districts fear those could create inequities if more low-income families like Murinko are unable to do the same.

So Spokane Public Schools, like many other districts across the country, is working with community organizations to create a low-cost alternative: learning hubs. Simply put, they're a place for kids to spend the day learning, providing single and working parents much-needed child care.

"It's something, definitely, that we champion and we're encouraging if organizations have the manpower as well as the resources to set it up," says Oscar Harris, Spokane Public Schools coordinator for family support and community engagement.

Organizations like the YMCA have already set up learning hubs in Spokane. Others, like Family Promise, have them sort of by accident: In the first couple weeks of school, the Open Doors Family Shelter packed roughly 30 kids into a meeting space smaller than a classroom where they attended their respective virtual classes. Priority Spokane, meanwhile, hopes to set up a website for parents looking for learning support for their kids.

But these learning hubs create some important questions: Are they any better at preventing the spread of COVID-19 than a school classroom? And can they accommodate all families who need it?

With schools closed, the burden falls to these community organizations to answer those questions.

PODS VS. HUBS
Each morning, Angela Miller helps her daughter get ready — packing up her laptop, crayons and packet of school work. She then drops her daughter, a third grader at Hamblen Elementary, off at school.

Except school isn't actually at the school. It's at a family friend's house or, sometimes, at Miller's house. That's because Miller and a group of other parents have formed a learning pod. They've figured out their work schedules so the parents can rotate having the kids at their house for school each day.

So far, Miller says, the learning pod has worked out.

"I feel better about my daughter being able to stay on track," Miller says. 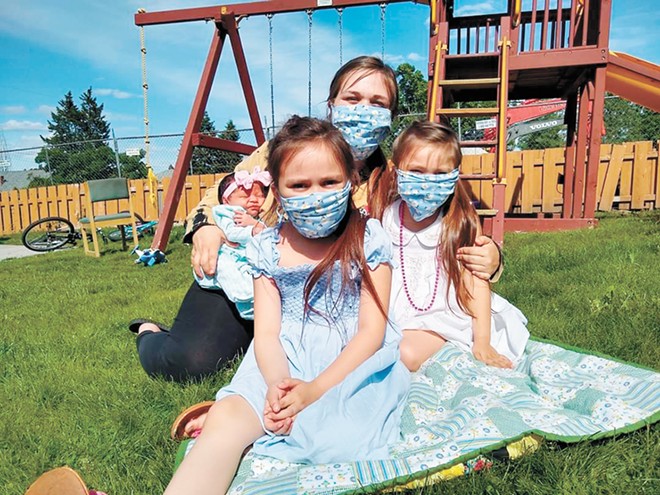 Miranda Murinko and two of her children, Heaven, 7, and Unique, 4.

For Murinko, however, the early days of distance learning have been more of a struggle. Without a learning hub or learning pod, setting up virtual school was an immense challenge for Murinko and her daughters. To begin with, Murinko had no access to a computer or WiFi. Thankfully for her, Comcast gave Family Promise — which operates the Hartson House shelter where she has lived since May — a $25,000 grant to provide laptops and six months of internet service.

But then, once school started, Murinko says she often has difficulty helping her 7-year-old, Heaven, navigate the technology.

The chasm between the two experiences highlights a major concern for schools that started with distance learning: It could widen educational inequities, causing low-income students to fall behind.

"You have to be careful with learning pods and learning centers because it can widen the gap in terms of equity," Harris says.

Local elementary schools are starting to open day camps for that very reason. Murinko, for one, hopes her daughter Heaven can join. But they're filling up fast, forcing some parents to look to other options.

The YMCA set up a makeshift school within a matter of weeks, with the goal of helping working families. Throughout four locations in the Inland Northwest, roughly 100 families send their children to the Y during the day. They look, more or less, like schools: An alphabet covers the basketball gym walls, as students sit in desks on the hardwood floor getting help from staff members.

"It's not just a gym anymore," says Angela Hanni, program director for the YMCA in Spokane Valley. "It's an educational hub."

Spokane Youth For Christ, a nonprofit that aims to help at-risk youth, opened a learning hub of its own in its West Central youth center, says Executive Director Andre Lewis. But it doesn't have much space. In a room around the size of a classroom, he says the health district only lets them have nine kids in the learning hub. But he says teachers are constantly asking him if he can take more.

"If we were doing this across all four youth centers," Lewis says, "I'm sure we'd fill up today."

SLOWING THE SPREAD
But are learning centers any safer than a classroom?

For the most part, yes, says Kelli Hawkins, spokeswoman for the Spokane County Regional Health District.

The ideal situation, in terms of slowing the spread of COVID-19, is that a child can be at home learning, Hawkins says. Yet learning hubs can be better than a classroom, she adds, as long as small groups of students stay together, masks are worn and other precautions are taken. 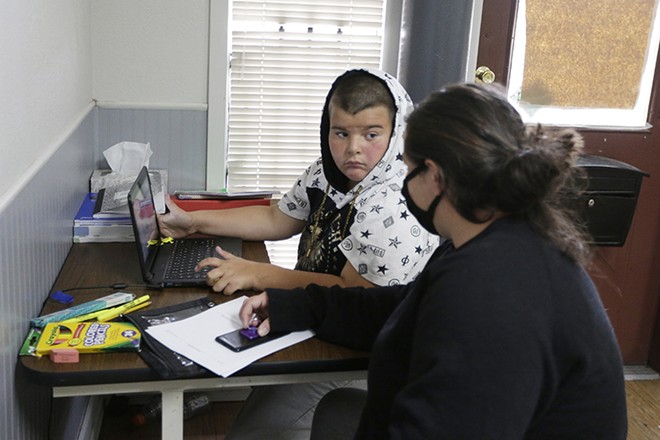 "There are positives to having learning pods and learning centers because you are dealing with a smaller number of students — we are reiterating that with our guidance — and they're not mingling with other groups," Hawkins says.

Joe Ader, executive director of Family Promise of Spokane, says the Open Doors shelter had 6-foot distancing and conducted regular temperature checks for the dozens of kids in one room doing virtual learning. After a week or two, many of those students qualified for the day camp at their local school, which meant they didn't have to cram into the learning hub at the shelter. But he says the day camps may create more of a concern when it comes to COVID-19.

"If they go into the school population and then come back into that shelter, it creates a lot more risk," he says. "We haven't even allowed the volunteers into the building since March."

But while the ideal situation for preventing COVID-19 may be keeping students at home, wherever that is, it's not what's best for working moms or for student learning, says Harris, with Spokane Public Schools.

"The ideal situation would have been for us to have all of our kids in school," Harris says. "Joint ventures like this, as well as out-of-the-box thinking, is something we have to do because of the pandemic." ♦

The original print version of this article was headlined "The Replacements"