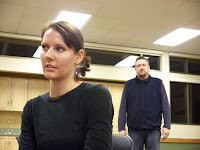 Bobo conducted an e-mail interview with Hosking. (The production is an Inlander Pick in the Feb. 25 issue.)

Bobo: Harrower's dialogue looks like free verse on the page. How has that affected rehearsals? Hosking: The story drew me to the play, and the poetic dialogue made me decide to produce the show. The lines have repetition and a certain pattern that have created a challenge for the actors. Our goal is to bring out the rhythms of the poetry, so the story is compelling to watch and beautiful to listen to.

What specifically have Harrower and you, as director, done a) to make Ray seem like less of a creep and b) to make Una seem like less of a victim? Good question. Blackbird would be an uninteresting play if the characters were so simple. The audience will hear both sides of their stories and each character will have his and her moments of grace and ugliness. I give a lot of credit to my actors: Jamie Flanery has found Ray’s vulnerabilities, making him more human and less of a monster, while Emily Hiller has tapped into Una’s strength.

Fifteen years ago, he had the power over her; now she has the power over him (she could ruin his life). What specific details of your production indicate this power reversal? Harrower has written that power struggle in his dialogue and storyline. Once the characters enter the room, they are moving along a narrow metaphoric ledge. At various moments in the play, they come dangerously close to the edge and take turns nearly falling off. At any moment, Una can decide to walk out the door and tell Ray’s co-workers about his past. He knows this, and this creates a wonderful tension. Even a seemingly insignificant action, such as one character asking the other for a drink of water, becomes a struggle between them.

Would you prefer, or not, that I write around the premise, maybe not reveal their ages? ( see 10/1/08 post on this blog ) I don’t think it’s a problem to mention their ages, but please don’t give away the twist at the end. You could say there’s a twist though. I’m telling people it’s for mature audiences only.

And Hosking continued: I didn’t get to see the Portland production, so our presentation is completely without influence from outside sources. I’ve had a great time collaborating with the actors and my stage manager, Toni Cummins, has had wonderful insights too. The interesting thing about doing a contemporary play that isn’t yet an audience favorite — like a Neil Simon play — is that there’s nothing to compare it to. Putting on the play is the road less taken. I saw that as a challenge, so I guess that’s why I decided to do it.

As a teacher, I’ve known several girls like Una. The relationships they have with these predators isn’t as black and white as the rest of us think (not to trivialize the damage, which is enormous). In Blackbird, those girls finally get to have their say.

Coming soon to a Spokane-area theater near you