THIS JUST OUT: Black-Eyed-Peas-begin-to-apprentice-with-Epic-Mickey-the-sorcerer edition 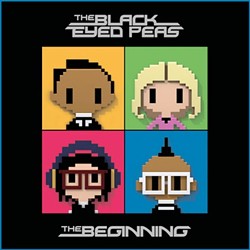 The Beginning comes after The E.N.D.? Oh, BEP, how you love to confuddle us so! Or rather, how you love to belabor under the delusion that anyone actually cares what you call your albums (see: Weezer, Hurley) outside of the fact that we need something to search for on our favorite torrent sites!*

The Black Eyed Peas evoke the same feelings from music critics that Rodney Dangerfield evokes from music critics, in that they get no respect.** Of course, when your band is composed of people with names that look more like TinyUrls (will.i.am, apl.de.ap), you'll forgive us for thinking your focus may not be on the music.

Will.u.jam tries to convince us otherwise, though, with his closing lyric, "I pledge my allegiance to rhythm and sound/Music is my medicine, let the rhythm pound," apparently setting aside coherence for the rhyme (which, to be fair, is kind of what the line promises).

Also, while I'm not ethnic enough to determine if "Would you let me love you, let me love you long time?" (from "Love You Long Time") is offensive, I do have sufficient brain power to determine that "But I ain't talking 'bout sex with techno/Girl you stole my heart like a klepto/Butterflies in my tummy, need Pepto/Bismo, baby gimme mo' sex though/It's your pleasure like I'm gecko/Girl will I stop lovin' you heck no/Honestly I think you got me in a heck show/When I'm with you it's all perfecto/And when I'm leavin' you hit me with a text/and you talk about that xoxoxoxo" is inane.

Then again, ragging on BEP is more than a bit like ragging on Ke$ha — people who enjoy it because it's too damn catchy not too don't really have a choice, and the people who think it's amazing music probably can't read anyway.*** 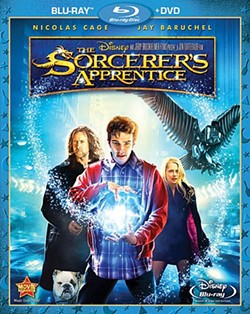 This movie brings up so many questions: How could Disney so blatantly rip off what's probably their best-known animated short? Why does Jay Baruchel take on projects like Million Dollar Baby, Tropic Thunder and Fanboys only to throw away all good will with drek like this? And just how does Nicolas Cage choose what movies to appear in?

The basic thread of the movie is that Cage is Merlin's apprentice and has to find the Prime Merlinian (no, seriously) in order to defeat some sorceress who he basically already defeated by entombing her in a Russian nesting doll. Baruchel (the aforementioned magical latitudinal line) is a super-nerd who tries to get with this girl he hasn't seen since third grade (because that's not creepy at all).

He eventually wins her over because he's … good at science, I guess? There's lots of Bruckheimerian explosions and dragons and car chases (because they can use magic, so of course they're driving cars), and, eventually, the total misapplication of a Tesla coil (and, really, all electronic principles in general).

But the important thing to remember is this: The filmmakers tried super-hard to have the movie magic be grounded in science and physics — like requiring Baruchel to understand the individual atoms' collisions in order to create a fireball. Which makes perfect sense, because what's more scientific than using "magic" to completely ignore the fundamental laws of physics? Nothing, of course. Well, maybe those plasma balls they sell at Spencer's. But that's about it.

Ugh, I know. Disney's never really been big on the whole videogame thing, outside of crappy licensed games (with the notable exception of Kingdom Hearts). But this time, they've got it.

Epic Mickey is, as the title suggests, epic. Hearkening back to the prewar Mickey (a mischievous little rodent), this game immerses the player in a Bizzaro Disney world that Mickey discovers by being pulled through a mirror. In this land live the forgotten Disney characters — Oswald the Lucky Rabbit, Pegleg Pete — among the twisted mirror-versions of places we already know (Gremlin Village instead of It's A Small World).

It is, in one sense, a dark reboot for Mickey Mouse. He receives a full retro look (to go along with the retro stylings of Oswald, who's jealous of Mickey's success and wants to steal his life), and a very dark interpretation of traditional cheery Disney worlds. Mickey's weapon consists of the paintbrush from The Sorceror's Apprentice, which he can use to either paint (create) or thin (destroy), to defeat his enemies.

Reviews on the gameplay are mixed thus far, but the concept is universally praised. And really, if it's a good Disney story, what more do you need?

* Who's still using torrents? Why don't you go back to LimeWire, Grandpa! Wait, did I just diss myself?
** I can't prove this empirically, of course, but one assumes that Rodney would get no respect from a group of people critquing an art form he's never attempted before, as it's the same reaction he apparently garnered from everyone from Playgirl to his doctor.
*** I'm just funnin'. Also, I defy anyone to describe any difference between "Someday" and an Eiffel 65 song. I double-dog dare you.
† I know that's not the right word, I just can't figure out what the right word is.

SEEN IN SPOKANE: The ignominy of filmmaking

Megaload case goes to the wire