McLaughlin's thinking of running for seat in Spokane Valley 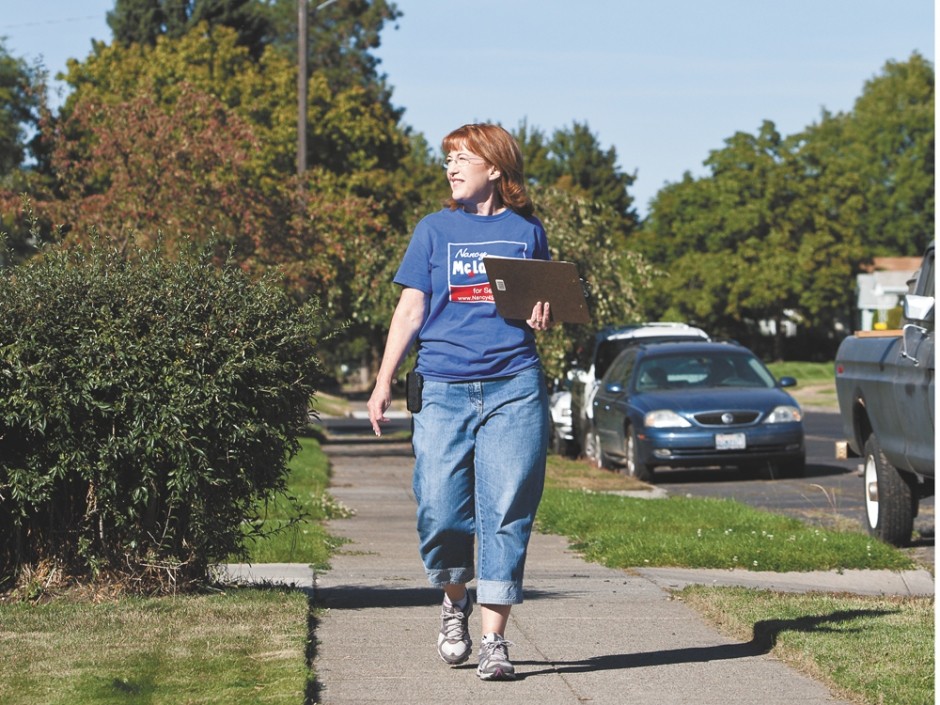 Nancy McLaughlin on the campaign trail in 2012.

City Councilwoman Nancy McLaughlin knows very well that she lost when she ranagainst Andy Billig for state Senate in the 3rd District. And she knows shelost handily. She wasn’t running against an incumbent, and she had plenty ofname recognition, but she still lost.

“When you only get 42.5 percent of the vote… I don’t have 15 years to sitaround and wait for [another] opportunity,” McLaughlin says. “The odds are thatthey won’t elect a Republican in the Third.”

But the 4th District? In SpokaneValley?

You can brandish a gun at someone in traffic, and refuse to talk to thepress, and still walk away with 56 percent of the vote in the 4th District, aslong as you have an (R) after your name.

And so with 4th District Republican Rep. Larry Crouse thinking aboutretirement, McLaughlin says she’s had a number of people come up to her,encouraging her to move to Spokane Valley and run for his seat.

“It’s true, [my husband] Dave and I are considering that,” McLaughlin says.“We’ve done a little bit of looking at the land out there. It’s very expensive…[but] I still have a desire to serve, and I want to serve in the policy realm.”

In particular, McLaughlin says she’s passionate about giving moreflexibility, and less regulation, to cities and school districts when itcomes to spending state money. There needs to be reform, she says, with programslike worker’s compensation.

Of course, McLaughlin says she isn’t the only person interested in theposition — she cites Spokane Valley Mayor Tom Towey, and former mayor DianaWilhite as other possible contenders.

With John Roskelley last year and Mark Hamilton this year in the headlines for challenges to their residency, McLaughlin says she was absolutelysure to double-check the residency requirements this year.

"By state law, for a state senator or rep position, you just have to beliving in the district you are running for on the day that you file," McLaughlinsays. "I have until next May to work through this, to see that the doors ofopportunity are open. I don’t want to move just for a whim."

Just a reminder: The Inlander is free

The truck you won't see at Car d'Alene