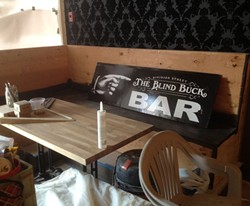 The Blind Buck is opening soon.

Spokane’s got two new places on the list for drinks and more: Evergreen Bistro up north on Francis, and The Blind Buck on Division next door to the old Globe building. Read more about what they’re offering in this week’s Entree newsletter, which also has news of two popular eateries — one sweet, one cheesy — branching out into the food truck world.

This week’s issue also includes a roundup of local brewery news, including big expansion plans at Selkirk Abbey, the new offerings from Hopped Up in Spokane Valley, the groundbreaking for Perry Street Brewing Co. and a few more.

Coffee news site Sprudge visited Spokane and calls it “one of America’s leading emerging cities for four-dollar cups of coffee.” The article is a nice little tour of Spokane’s coffee scene — it mentions Indaba, Coeur, Revel 77, DOMA, Slate Coffee Roasters, Manners Roasting and more — and offers fun cultural insights about how our city appears to outsiders with asides like “(drive thru coffee is ubiquitous in Eastern Washington).”

Dawn of the Donut, a zombie-themed doughnut shop on North Division, is getting a lot of pre-opening hype. Doughnuts? Zombies? How could it not, right? The shop is set to open at the beginning of August, but there’s a TweetUp with free samples planned for July 31 from 8 to 10 am.

If you missed it last Friday, we noticed some city paperwork indicating that the team behind the Elk Public House and its sister restaurants is taking over fire-damaged Geno’s. (Earlier this week they confirmed there’s a plan in the works, and we’ll let you know more when it’s a done deal.)

Casper Fry is transitioning to a new executive chef — Josh Grimes, who’s well acquainted with how things are done at the Perry Street restaurant. The Facebook announcement says: “Josh has been leading the line in our kitchen for more than a year now, and is the chef responsible for all those amazing Josper cooked meals you’ve enjoyed at CF.”

Chairs Coffee and Public House, a new location from the Chairs Coffee team in the old Bulldog building, is looking at an October opening. They’re also looking for a general manager right now.

Remember how Golden Hills became Orlison Brewing, with plans for cans? Here’s an image they released of what to look for on shelves in the near future: