In an effort to combat binge drinking in students, WSU announced it plans to offer more Friday morning classes and will notify parents if an underage student is caught drinking or using drugs. (S-R)

If you noticed a reddish tint to the water of the Little Spokane River yesterday here's what it was for. (Inlander)

A man who shot and wounded a bus driver in downtown Seattle yesterday morning was later fatally shot by police, and reportedly had a history of drug and mental health problems. (Seattle Times)

Two wildfires sparked by recent lighting storms in south central Idaho have forced the evacuation of residents, some for the second year in a row due to the fire threat. (AP)

The U.S. Justice Dept. has filed a lawsuit in an attempt to block the merger of U.S. Airways and American Airlines. (NY Times) 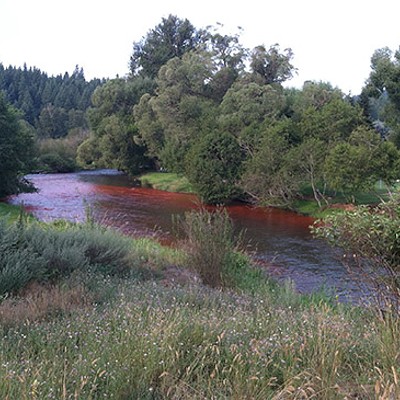 How Spokane stacks up against Outside magazine's other Best Towns