Which is the first Inland Northwest beer in cans?

Earlier this year we started hearing rumblings and seeing protoypes indicating that Sandpoint-area Laughing Dog Brewing was planning to put some of its beer in cans, as was the rebranded Orlison Brewing Company. We’ve written before about how the beer can is gaining respect, and not just because it’s the hip Portland thing to do. So the question became: Which Inland Northwest brewery would be the first to get its beer in cans? 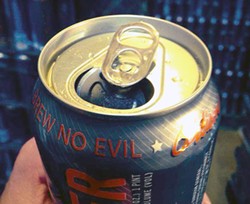 We got the answer this weekend when Northwest Canning, a Portland-based mobile canning company, made a stop at Orlison Brewing in Airway Heights on Sunday and Monday. And then they moved on to Laughing Dog, where they are today.

Northwest Canning owner Justin Brandt says he’s worked closely with both breweries and plans to be coming through once a month to stop at both.

“It’s been a long time in the making,” he says.

And Laughing Dog did get their cans first, even if they were technically filled second. So we’ll call this a tie — and the kind of tie where everybody wins.

For Orlison this is the first time its beer will be packaged, and it represents a major step in the expansion plan heralded by the change in name earlier this summer. The first off the line is 16-oz. cans of Havanuther, a light pilsner. Laughing Dog already distributes many of its brews in 22-oz. bottles and a limited selection of standard six-packs, but their first canned brew, the 219-er pilsner, was only available in kegs until now.

Now the question is which one we’ll drink first. Expect to start seeing cans around town very soon.

Les Miserables at the Civic is totally sold out

VIDEO: Writer Maria Semple in Spokane, if you missed it