THIS WEEKEND IN MUSIC: Nirvana remembered and the case of too many Saturday shows

The biggest group of Nirvana-tribute shows happening this weekend starts tonight at the Hop! Combining the talents of Nuke Venus and Gardening Angel, Nukevana plays an acoustic set of songs mostly set on In Utero. Read all about it right here.

Mootsy’s is holding a Teen Closet Clothing Drive tonight with live music from local favorites Mirror Mirror, Ramsey Troxel, Matthew Winters, Tyler Aker and Logan Heftel. The entrance fee for the event is a donation of clothing, canned food and new underwear or socks. The show stars at 6 pm.

Nirvana continues to be memorialized Friday at Carr’s Corner.

The band formerly known as Citizen Arms is taking on Jones Radiator Friday night. That’s right, the acoustic duo Feral Anthem will be joined by Hey! is for Horses and Jordan Heights at 8 pm.

We dare you to try and hit all of these shows:

The Bartlett — Like many bands these days that sing about or are inspired by Jesus, Garage Voice would not classify themselves as a Christian band. Instead, the three-piece is a rock ‘n’ roll band that also creates Gospel music. At the core of the Seattle group’s sound is the Hammond organ (think 1960s rock) and an especially reverberating guitar. Their Saturday show at the Bartlett (a venue that has officially been open for a week) features Scott Ryan, starts at 8 pm and is $8. 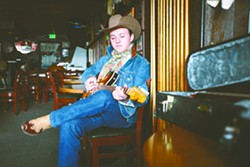 Chateau Rive — Coeur d’Alene’s Sam Platts and the Kootenai Three aren’t afraid to play real country — none of that pop-with-a-dash-of-twang stuff you’d hear on the radio. Instead, the act revs up old-school honky-tonk on a steel guitar, electric guitar, upright bass and drums. They join young country duo Colby Acuff and Justin Sherfey (the reigning U.S. NW Fiddle Champion) Saturday for a cowboy party downtown Spokane at Chateau Rive. The show starts at 8 pm and is $10.

Luxe Coffeehouse — It’s that one day you forget about the holidays, winter solstice, the day when the calendar finally acknowledges what season it’s actually been for some time. Throwing a Solstice Celebration consisting of yoga, live music, drum workshops, meditation and more is Luxe Coffeehouse. Musicians include Real Life Rockaz, B Radicals, The Tone Collaborative, Bodhi Drip, Soul Symmetry, Moksha, Andy Rumsey, Dirk Lind and more. Activities begin at 5 pm.

The Viking Bar and Grill — So, it’s another ugly Christmas sweater party. But so what that you’ve already been to several this year? We bet you haven’t been to one that featured The Lion Oh My, Lavoy or Elephant Gun Riot. This show not only includes a best sweater contest, it’s also free to get in. It begins at 8 pm.