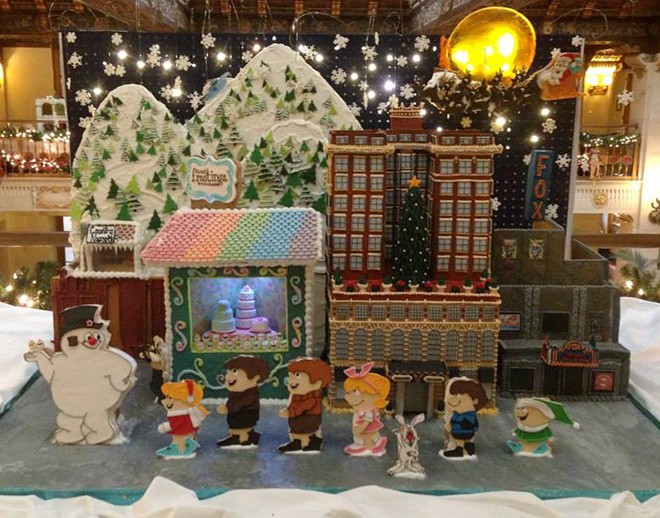 Davenport Hotel Facebook page
Sweet Frostings' gingerbread creation includes a miniature version of the Davenport and their own shop.

At last weekend’s gingerbread contest and the Davenport, Sweet Frostings earned the most votes for this detailed gingerbread version of the Davenport, the Fox Theater and their own shop. Geographically inaccurate, but delicious. And just look at those teeny cupcakes in the window of the gingerbread. Check out other photos here and here, or go see them on display through Christmas.

After a tough year, Asia Restaurant on the South Hill is closing its doors this weekend.

An encouraging progress report for a handful of long-awaited breweries/distilleries/cideries: Ramblin’ Road got the OK to start making beer at their new brewery, and the taproom could open next month. The first keg of Liberty Ciderworks’ New World Cider is now pouring at Manito Tap House. And, after delays compounded by the government shutdown this fall, Tinbender Craft Distillery got the OK to open and Evanson Handcrafted Distilling got their whiskey and 100-proof vodka labels approved.

No-Li is releasing a little Christmas present for all of us on Dec. 24 — the Skyrail IPA, a single-hop brew made with Amarillo hops. The next release in the Expo Series will be out in April. In other No-Li news, the legendary Crystal Bitter is starting to show up on tap lists around town with its new name: Spin Cycle Red.

The historic Commellini Estate in far north Spokane operated as a restaurant for decades, and the event center still opens as a restaurant a few times a year. This Friday’s five-course dinner is sold out, but the happy hour periods before and after dinner are open to anyone.

Time is running out to try the holiday smoothies at Method Juice Cafe — and they’re hiring, too.

This week’s issue includes a feature about locally made cider, plus the opening of Noble Roman’s take-and-bake pizza and the not-so-secret soft opening of Chairs Public House. A recommendation from the owners that didn’t make it into the story: Try the sweet potato fries with the balsamic reduction.

LA Weekly has a list of “Most Overcooked Food Trends of 2013” that’s worth a look. On the list: Sriracha, kale, cronuts, truffle oil and more. (I would definitely welcome ramen burgers to Spokane, though.)

We’ve been trying a new thing every Monday to ease you back into the week with a sampling of staff recommendations on topic like reading, watching, etc. This week was drinking, so check that out.

THIS WEEKEND IN MUSIC: Nirvana remembered and the case of too many Saturday shows