Crazy G’s Burgers, Phillys & Dogs on North Division, the creation of retired engineer Gary Swiss, is closing. Your final chance to stop by is this Saturday.

But here are a couple of new spots featured in this week’s Entree newsletter: Schmidty’s, a new burger joint in Coeur d’Alene, and the Pizza Truck, which is what it sounds like. It’s been roving the region for private parties and events since around Christmas, but may set up shop for regular hours soon.

Popular Coeur d’Alene cafe Java on Sherman is moving — but just a few blocks down, to the former location of Jonesy’s at 819 Sherman Ave.

On Monday the Birdwell family turned over Birdy’s Sports Bar to new owners, Johnny B. and Michelle Goode. The new owners say they don’t plan to make major changes, but may open earlier for lunch.

Atilano’s on Sprague got burgled for the third time in three months, and the co-owner suspects it’s the same person.

A second business showed up in the licenses for 19 W. Main, the former Merlyn’s building and future market-style home of Black Label Brewing Company and other vendors: Mediterrano, a restaurant planning to sell pita sandwiches.

Both Pinot’s Palette and Wingstop are planning to open next Friday, Feb. 28. 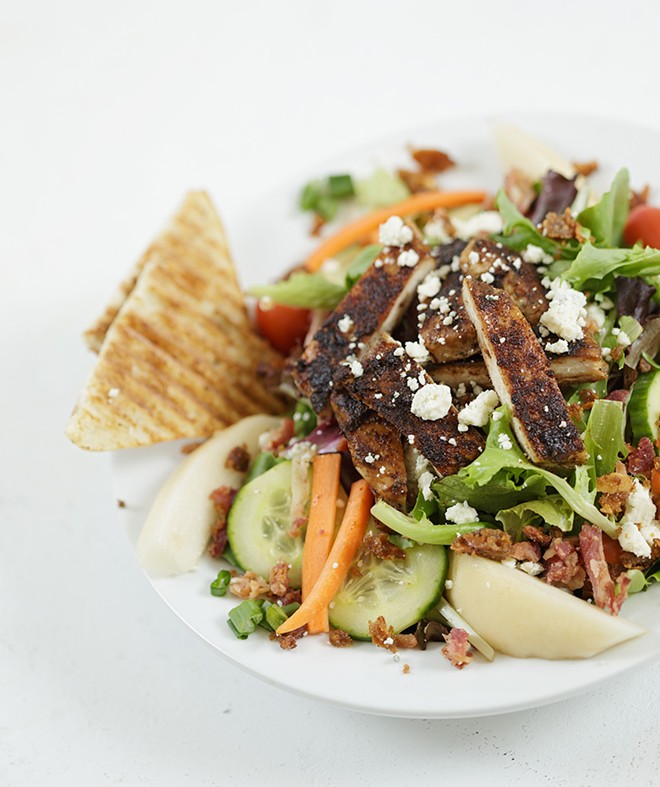 Young Kwak
The pear gorgonzola chicken salad from Laguna Cafe, one of the many options on the restaurant week menu.

Inlander Restaurant Week finally begins tomorrow. If you go out to eat, use the hashtag #INRestWeek to tell everyone what you’ve tried. We have dozens of amazing photos like the one above that we'll be posting on Facebook and Twitter throughout the week.

Pullman’s doing its own restaurant week, too. Hosted by the Pullman Chamber of Commerce and ASWSU, the student government, it starts Sunday and ends next Friday, Feb. 28. Each participating restaurant is offering a meal at either $12 (Fireside Grille, Rico’s, the Coug) or $20 (South Fork Public House, Birch & Barley, Paradise Creek Brewery, Black Cypress, Banyans on the Ridge, the Hilltop Inn).

There is no shortage of beer this weekend, either. Tonight, Ninkasi and Iron Goat release their collaborative triple IPA at Jones Radiator. Ninkasi brewer Jamie Floyd is also stopping by Press on the South Hill and Swinging Doors, and maybe a few other places.

Also tonight is Taste of Sandpoint, with Laughing Dog and MickDuff’s and many other local food companies.

On Saturday, the Washington Beer Commission is hosting a statewide open house, and the participating local breweries — Orlison, River City, No-Li, Ramblin Road, Iron Goat and Hopped Up — have tours, new releases and food specials planned. Separately (it’s not in WA, after all), Trickster’s is hosting a beer-and-cheese tasting.

Global MREs — see photos of what the world’s soldiers get to eat.

Also, we missed linking to our interview with the shirtless barista stand from last week, so here’s that.

Read previous food news here. Seriously, please do use the #INRestWeek hashtag if you go out for restaurant week.

Zag Watch: Down the stretch edition