CAT FRIDAY: Keep cats away from lilies this Easter

Easter weekend is now a week away, which could be bad for your cat(s) because of one major thing: Easter Lilies.

The trumpeted blooming flowers often given as gifts in the weeks leading up to Easter’s observance are certainly lovely icons of spring, but if you have cats — beware. Out of all types of plants that, when ingested, can cause minor to severe symptoms in cats, lilies are one of most dangerous and deadly of all cultivated plants. And that’s lilies of any kind — not just the traditional Easter Lily. 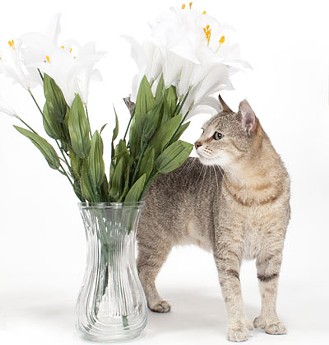 Thankfully these lilies look fake, because this kitty is getting a little too close to the toxic plant.

Though obligate carnivores — meaning their diets must be animal protein-based — many domestic cats are naturally attracted to greenery both in and outside their homes because plants serve as a small source of fiber. Cats can’t efficiently digest plant matter, though, so if you see your cat nibble on something green only to puke it up later, that’s not unusual, either. Cats may intentionally eat plants to induce vomiting to pass a hairball.

That said, even if your cat has never shown interest in nibbling plants, it’s still a good idea to avoid the risks entirely by not bringing any lilies into your home.

Ingesting any part of the plant can cause death if not treated, but the first symptoms are vomiting, lack of appetite, lethargy and kidney failure, according to the ASPCA, which offers a lengthy guide on all plants known to be harmful to pets.

It’s not known what specific toxin in lilies is so deadly to cats, but even one bite of a leaf or taste of pollen can bring on symptoms. If you suspect your cat has eaten part of any houseplant, seek immediate veterinary care. It’s also a good idea to take a picture of the suspected plant(s) if you’re not sure so the vet can give an accurate diagnosis and treatment.

Another thing to avoid at Easter if you have cats, especially kittens — fake Easter basket grass, at least of the non-paper variety. If accidentally ingested by a cat, the foreign object could potentially require surgery to remove.

The ASPCA has a 24-hour poison emergency hotline (888-426-4435; note there is a cost involved) for pet owners who are concerned their cat or dog is showing signs of ingesting a harmful substance, plant or not.

Sources and more info on plants harmful to cats and other pets:

The Gerlach verdict and the value of stuff over people

Talking to my dad about Gail Gerlach