What happened at Sasquatch! 2014 … is shared here

There wasn't a moment people weren't partying at Sasquatch! 2014. Many started everything Thursday afternoon when the campgrounds opened. I, however, rolled in Friday with the other “late” folks. It was my first time experiencing the three-day music festival at the Gorge Amphitheatre and there was nothing that could have prepared me for the event that brings together college kids, Canadians and people who wear PBR cases as hats together in one gorgeous spot.

It only rained once. And for Memorial Day weekend in the state of Washington, that is a miracle. Otherwise, the weather for the Sasquatch! music festival ranged from skin-scorching heat to oppressive winds and icy nighttimes. Still, concertgoers powered through, never letting anything stop the party.

Although there were more shows than it was possible to attend, here are the highlights:

The biggest and most important show of Friday, and potentially the weekend, was Outkast. I screamed and jumped and danced on repeat with the surrounding crowd. They started with “B.O.B.” (Bombs Over Baghdad), appearing in the middle of the stage in a see-through cube with the Stankonia flag cover as the backdrop. Andre 3000 hopped around the stage with a bright white wig spewing his quick-tongued lyrics. Big Boi played off the energy of the crowd. It just kept going. Hit after hit like “Ms. Jackson” and “Roses.” With each song, junior high and high school memories flooded through our minds. The Atlanta duo has been on hiatus since after the release of its 2006 album Idlewild but thankfully decided to reunite for a 40-date tour this year. Their Coachella debut show was not so well received, but at Sasquatch!, Outkast was prepared, incredible and — even after 20 years as a group — so freaking fresh. 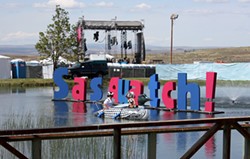 Swedish sisters Johanna and Klara Söderberg, of First Aid Kit, took on the main Sasquatch! stage (one of the five stages) in the afternoon, offering a bright and breezy folk set that sat perfectly for many of the day drinkers splayed out through the amphitheater lawn. The Dodos, over at the Bigfoot stage, played much of their primal beat-driven songs from 2008’s Visiter. People danced in appreciation. Later, Violent Femmes started with “Blister in the Sun” just to get people less familiar with their work interested — that ploy was semi-successful, but those who cared were there. Best part of the set was whenever the marimba solos happened — many of their songs are peppered with them and that was awesome to see live. M.I.A. wowed the crowd coming out in a shiny gold jumpsuit — her set would eclipse the headliners that night, the National. The British-Sri Lankan artist held the crowd and never let them go. And then Tyler, the Creator, the Odd Future rapper, has to be mentioned. His set was super fun and the masses loved him, but it’s like no one noticed his terrible lyrics. Sample: “Smoke a blunt, f—- a bitch.” Such poetry.

Sunday, man, Sunday was absolutely unbelievable. Haim was there, proving that females can successfully rock the pants off of a crowd. The trio of sisters made wild faces as their free-flowing locks swirled in the wind. Over in the comedy tent, Hannibal Buress told jokes about the “brilliance” of rappers' lyrics these days and Demetri Martin rattled off his signature one-liners.

Then the hour of genius happened. In order to see it all, I had to run from one stage to the next. There was Rodriguez playing “Sugar Man” and on to the booty-shaking weirdness of Big Freedia (my most exciting discovery of the whole event), and finally the holy experience hearing Kid Cudi’s “Pursuit of Happiness” live as the last rays of the day left the basin sky.

And then, finally, Queens of the Stone Age more than exceeded all expectations closing out the main stage, even playing “No One Knows” as their second song. The deep, bass-driven lines, fiery guitars, real piano and insane drumming and of course, the impeccable vocals of Josh Homme were on full display. There just aren't many American rock bands these days better than them. Period. Major Lazer ended the night with the biggest and wildest EDM bash of the festival. The various tribes of concertgoers with their flags and staffs and Indian headdresses listened to everything the Jamaican producer told them to do. Jump, clap, run. No one cared how cold it was, they threw their shirts high in the air when he demanded it. The bass beat on until nearly 2 am. Fireworks lighting up the sky signaled the night’s end. 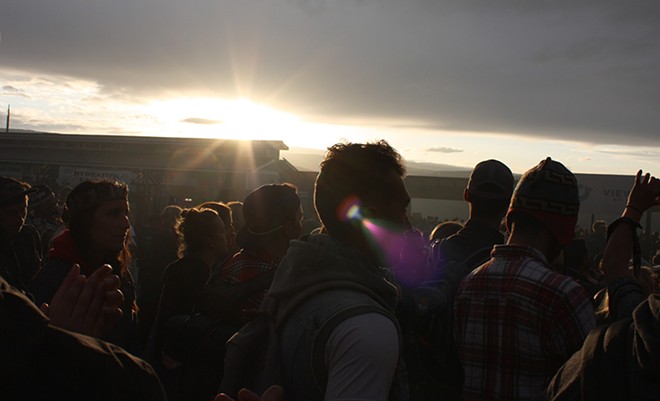 The best way to leave Sasquatch! is to hit the road early before the masses arise from a hazy slumber. As I rolled out at 7:30 am, there was at least one party tent/van-top in the distance with strobe lights still turning, the faint whisper of LMFAO’s “Shots” still playing. Some people never want the party to end.

Steve Salvatori to resign in July