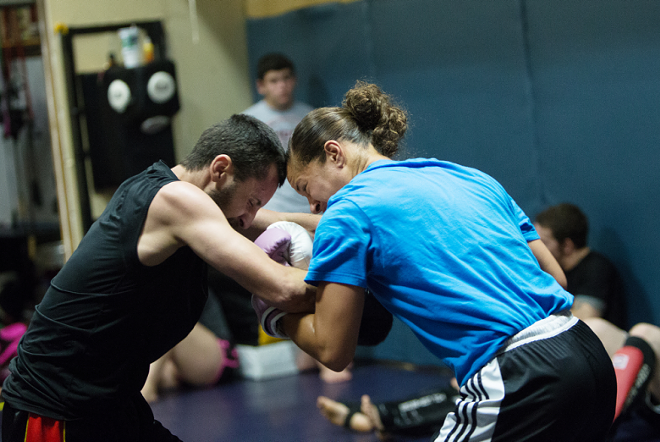 This week's culture section includes a profile on two of mixed martial arts' up-and-coming female athletes who live and train here in the Lilac City — Elizabeth Phillips and Julianna Pena.

Both women are quickly rising in this male-dominated sport, having signed contracts within the past year to fight for the Ultimate Fighting Championship, or UFC, the biggest organizer of MMA events and employer of professional fighters. Both train at Sik-Jitsu in northeast Spokane, a mixed martial arts gym whose owner and sole coach, Rick Little, also trains local UFC fighters Mike Chiesa and Sam Sicilia.

In the wee hours of tomorrow morning, Sat, Aug. 23, while most of us are still sound asleep, Phillips will step into the octagon for her second UFC matchup during UFC Fight Night 48 in Macao, China. The pay-per-view event is live-streaming online, so local fans can wake up around 3:30 am to watch Phillips battle it out with her opponent, Russian fighter Milana Dudieva. According to pre-fight odds, Dudieva is favored to win. For fans who feel that's too early to see a brutal fight, the event can also be streamed later via ufc.tv.

Meanwhile, tonight at 7 pm, at the Tulalip Resort & Casino north of Seattle, several of Sik-Jitsu's other fighters are heading into the cage. With Phillips and Little in China, they're being supported and coached by teammates Pena, Chiesa and Sicilia. Tonight's event is organized by Excite Fight, an MMA promotion venture owned by Little.

Chiesa and Sicilia are also in preparations for upcoming UFC fights on Sept. 5, and Sept. 20, respectively.