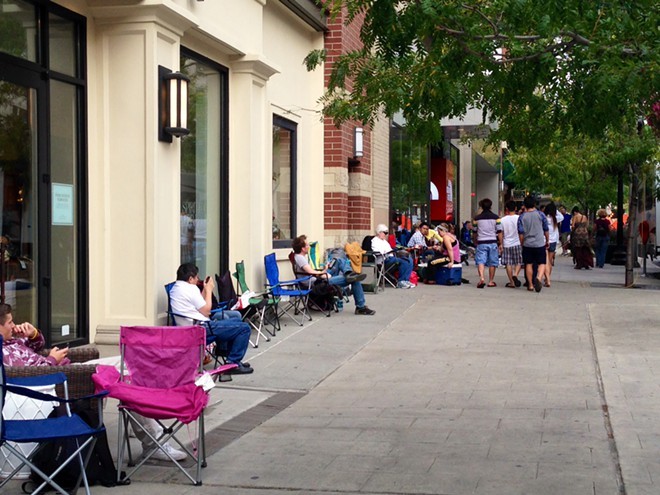 Heidi Groover
Customers wait in line in downtown Spokane Thursday for the Friday release of the iPhone 6.

When people started camping out for the new iPhone in downtown Spokane Thursday, we reached out to the police department to ask about why those people would not be cited under the city’s sit-lie law. The law includes an exception for people “operating or patronizing a business with permission to occupy the sidewalk,” but when we spoke with department public information officers Monique Cotton and Teresa Fuller, neither were aware of any permission or permit the Apple store had received to allow its customers to sleep, eat and watch TV on the sidewalk. The reason campers would not be ticketed was because they were not posing “reasonable safety or quality of life concerns,” Cotton said. In a separate response to our question, Fuller said, "The thing for us is as long as they're not causing an issue for other people to get around. … The issue is when we have homeless people sitting and lying, trying to get in people's way to get handouts, that sort of thing."

Although Stuckart has said previously he doesn't plan to push for a repeal of the law, he has expressed concerns since the law was expanded last winter that it could be used to unfairly target homeless people.

“It’s like they listened to my concerns and tried to verify that Ben was right,” he says. “They should have just cited the law.”

Stuckart says he plans to meet with SPD Chief Frank Straub this week to discuss the issue and will introduce the ordinance next Monday. It will not go through the council's usual committee process, and will be voted on Oct. 13 or 20, he says. (Read the full ordinance here.)

“The quotes were disturbing enough to me," Stuckart says, "and I’ve gotten enough feedback ... that I think we need to address it head on.”

Existing SPD policy already states that officers should enforce the law without bias, but Stuckart says codifying it will provide clarity.

"The goal isn’t to give a black eye to the police department," he says. "I believe they do a really good job. My goal is to clarify and to have a public discussion."

In an statement emailed to the Inlander Monday afternoon, Straub says officers' response to the line outside the Apple store was "consistent with the existing ordinance, did not reflect bias, and was consistent with the manner in which we have responded to similar special events in our City." He adds that he'll work with the city council and city legal to consider changes to sit-lie to "address the unique/special events."

The gathering of individuals on public sidewalks was not unique to the Apple store product launch last week. In fact, it is not usual for a large number of individuals to gather on the sidewalk for the opening of a new restaurant or business, for ticket sales to a performance, outside of our bars and night clubs, or for other special events.

There are stated exceptions listed in the Spokane Municipal Code, Section 10.10026, “Sitting, Lying on Sidewalk in a Designated Zone,” under B. Exceptions, specifically number 3 and number 4, that address, in part, these special circumstances. However, the circumstances listed above may present an opportunity to clarify these exceptions and to identify areas that may improve the existing ordinance.

The Spokane Police Department is committed to fair and unbiased policing.

Spokane Police Department Policy 402 specifically addresses the issue of bias-based policing and states: “The Spokane Police Department is committed to providing law enforcement services to the community with due regard for the racial, cultural or other differences of those served. It is the policy of this Department to provide law enforcement services and to enforce the law equally, fairly and without discrimination toward any individual or group.”

The Spokane Police Department’s response to the Apple Store’s product release was consistent with the existing ordinance, did not reflect bias, and was consistent with the manner in which we have responded to similar special events in our City. I will work with the Council and City Legal to determine if adjustments are necessary in the current Sit and Lie ordinance to address the unique/special events.