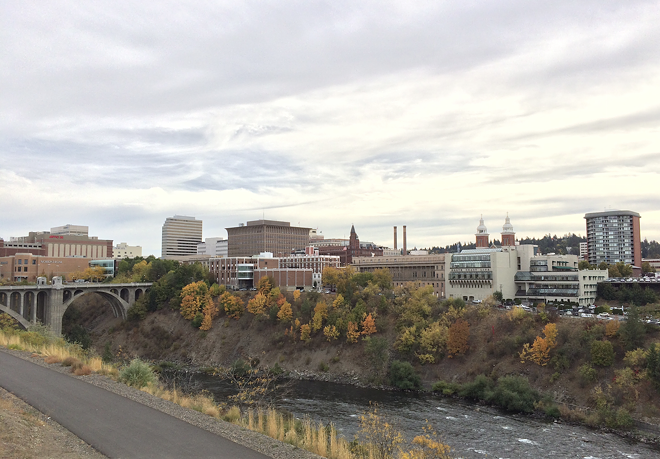 Jacob Jones
Despite the lingering 80-degree weather, it's a good time to check out the fall colors along the Spokane River.

In what sounds like an Operation Dumbo Drop-style spectacle, WDFW officials planned to capture eight infected bighorn sheep near the Snake River using helicopter-launched nets. They will then haul the sheep in aerial slings to a loading trailer for shipment to South Dakota State University for research to prevent the spread of pneumonia to other nearby herds. Sounds like capture went fine. (WDFW/LMTribune)

Anti-wolf residents turned out in force to a public meeting on wolf management in Colville on Tuesday, telling WDFW officials to ship those pesky wolves over to the westside to live with those pesky liberals. (AP)

TONIGHT: Experienced hikers with REI offer a class on the best local trails for fall, hiking preparation and essential gear. Here’s a schedule of other upcoming REI classes and events. (Inlander/REI)

Those who love hiking and Halloween can volunteer with or attend the “Return of the Zombies” night hike at Riverside State Park on Oct. 25. (WA Parks)

Sandpoint climber and Out There Monthly contributor Ammi Midstrokke writes about being trapped under a boulder in September. Here’s the background on the rescue. (Out There/S-R)

With salmon regulations changing rapidly the past week, be sure to check out the WDFW’s emergency fish rules before you head out. (WDFW)

FEMA announced new relief programs for the Carlton Complex wildfire including an erosion assessment team and $235 million for the Okanogan County PUD. (FEMA)

Outside magazine highlights three regional fire lookouts in a short feature on staying in the remote accommodations. We wrote about the Mt. Spokane lookout back in July. (Outside/Inlander)

If you didn't get enough water quality/salmon news last week, here's more information on the renegotiation of the Columbia River Treaty. Tribal and religious leaders continue to push for modern representation in the talks. (HCN/Indian Country)

The past, present and the future: local universities bring musicians to campus