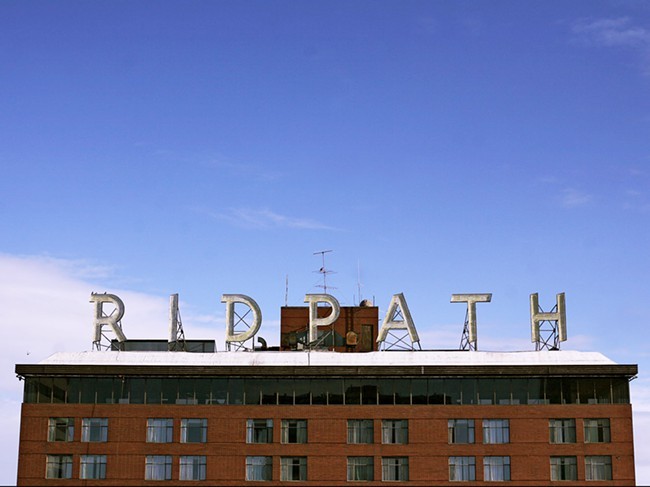 Back in April, we told you about the city's plans to help developer Ron Wells breathe new life into the dilapidated Ridpath Hotel downtown. City leaders were considering dipping into something called the Section 108 Loan Guarantee Program from the Department of Housing and Urban Development (HUD).

That program name alone was enough to give some Spokanites pause. That's because the loans require cities to act as the lender, putting their Community Development Block Grant dollars — otherwise spent on neighborhood projects that benefit low- and moderate-income people — on the line if the borrower can't pay back the loan. It's also because it brought back memories of the city's bitter history with River Park Square. Among the many controversies surrounding the luxury mall project were doubts about whether the mall should have qualified for loans that are meant to "principally benefit low- and moderate-income persons, aid in the elimination or prevention of slums and blight, or meet urgent needs of the community."

City officials argued Wells' $17-million micro-apartment Ridpath project was different. The building as is constitutes blight, they said, and some of the apartments in the building will be considered low- to moderate-income housing. The city even hired an outside firm to vet Wells' funding plan and help make the case that $4.1 million in Section 108 loans would be well spent on the Ridpath.

Now, Gavin Cooley, the city's chief financial officer, says the city won't need to pursue those loans after all. Cooley says improvements in Wells' funding package for the project and the market conditions around it have improved, decreasing his ask to the city.

"It kept getting better to where we're at $600,000" instead of the $4.1 million originally sought, Cooley told the Spokane City Council in a committee meeting today.

Now, instead of the HUD Section 108 loans, the $600,000 will come from another pot of HUD money the city has had for years but hasn't touched: Urban Development Action Grants, a now non-existent program that allows the city to make loans without putting community development grant dollars on the line. Cooley says the city has $900,000 in leftover UDAG funds.

Under the new plan, if Wells defaults on the loan (a prospect Cooley and others believe is highly unlikely), the city would lose the money it lent, but would not be forced to forfeit other community dollars as it would have been with the Section 108 loans. City councilmembers said they planned to use the UDAG funds to create a "revolving loan fund," where money that is repaid by borrowers, like Wells, will go back into the fund for future loans on similar projects.

By the end of the year, the council will vote on a resolution to lend the $600,000 to Wells and a set of criteria that projects must meet to get one of the new "revolving" loans. Cooley said Wells expects to have the rest of his funding, mostly coming from federal loans and tax credits, secured by February.

"It feels like we've been talking about this [project] for forever," Councilman Jon Snyder, who represents downtown Spokane, said at the meeting. "We need to get out of the way."

Z Nation gets the green light for a second season

MORNING BRIEFING: Ticketing kids for being high and drones over Syria