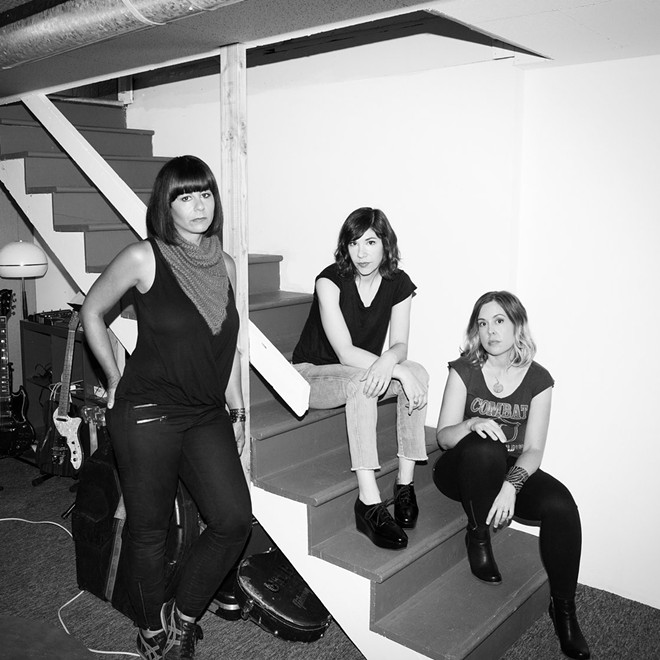 Sleater-Kinney: (left to right) Janet Weiss, Carrie Brownstein, Corin Tucker
UPDATE: The Sleater-Kinney show has sold out of tickets, so if you want to see them, you'll have to hit the web and hope someone's selling, encourage the band to book a second date in Spokane, or travel to some exotic locale outside Spokane.
A little more than eight years ago I drove 14 hours from my then-home to meet a stranger who had contacted me via email with an offer of free tickets to the "final" Sleater-Kinney show at Portland's Crystal Ballroom. Thankfully, she was just a rabid fellow fan doing me a solid after reading my online wailing about not getting tickets, and not a serial killer. It was an amazing show, and a satisfying conclusion for me as a total S-K geek. If my favorite band of roughly 10 years had to call it quits, at least I got to see it, and they threw down a gloriously punky, emotional gig on their way out the door.

Happily, it turns out that wasn't a conclusion at all, just the start of a lengthy hiatus that allowed Carrie Brownstein to co-create Portlandia and awesome, now-defunct band Wild Flag, Corin Tucker to make two albums under her own name, and Janet Weiss to play in Wild Flag, Quasi and Stephen Malkmus' Jicks. And that Sleater-Kinney hiatus is coming to a dramatic end with the abrupt announcement of a new album, No Cities to Love, arriving on January 20, 2015. A tour in support of the album will start at the Knitting Factory in Spokane on Feb. 8. Tickets will be on sale through the band's website, and are on sale Oct. 24 through the Knitting Factory's site.

There's been a feeling that something was going down, reunion-wise, when a new song, "Bury Our Friends," was delivered via 7" vinyl in the band's new box set of remastered old albums, Start Together. And now there's a video (of sorts) of that new song:


You can get a free download of "Bury Your Friends" right here.

WHAT'S UP TODAY? Trivia challenges, electro-pop and a poetry pro

CONCERT REVIEW: Rolling the dice on the Gambler