Why The CW gets comic book shows right 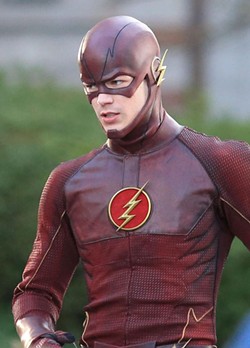 The CW is an easy network to make fun of. It’s often light-hearted soap-operatic fare, full of OMG and the occasional WTF. This, after all, was the network that gave us Gossip Girl, a show that ended with the reveal that Gossip Girl was actually Gossip Boy.

And yet, their superhero shows, Arrow and The Flash, are so much better than those on other networks, like Gotham and Agents of S.H.I.E.L.D.

Some of this is because both come mostly free of baggage for the average viewer. Most people vaguely aware of comic books are familiar with The Flash (he’s that speedy dude, right?), but he hasn’t been a pervasive part of the pop cultural world the way Batman, Superman, Spider-Man and the X-Men have been pounded into our psyche. Green Arrow is even more obscure, though he’s had roles on Smallville and animated shows like Batman: The Brave and the Bold.

This alleviates the terrible burden of expectations. Arrow (Wednesdays, 8 pm) takes place in Starling City and The Flash (Tuesdays, 8 pm) in Central City, not in Gotham or Metropolis. We don’t have to constantly question why Superman and Batman aren’t constantly part of plot lines, or why Iron Man and Thor aren’t constantly showing up to save them. Viewers don’t have to compare Grant Gustin’s performance as Barry Allen to, say, the performance of Val Kilmer, Adam West and Christian Bale.

In fact, The Flash had the freedom to somewhat reinvent the Flash origin story. (Particle Accelerators were hard to come by back in 1956. A lightning bolt and chemical spill had to suffice.)

But there’s a deeper lesson in these two shows, that very much can be credited to the CW. At its core, they’re CW shows, with all their beautiful people, love triangles, fancy clothes, nice cars and plot twists. The DNA of shows like Gossip Girl, in other words, has been spliced with the superhero's ethos.

CW has taken genres it already does well and dressed it up in superhero tights. A superhero show can’t just be about superpowers, just like Friday Night Lights would have failed if it were only about football. Superhero fights can barely sustain a three-hour movie, much less a TV season with a lower budget.

So on Arrow, Oliver Queen disguises himself as a rich, entitled douche to better keep his heroism secret. But this, of course, allows Arrow to spin out rich, entitled subplots that are interesting enough on their own. Arrow draws a lot on Count of Monte Cristo, essentially the original Batman story.

The Flash is show that, ironically, captures the light-hearted Marvel movie tone far better than Agents of S.H.I.E.L.D. It has a Peter Parker sense of "Gee whiz!" and fun that Gotham never tries for and S.H.I.E.L.D struggles to balance with genuine stakes. Allen is young and gung-ho: The CW knows all about writing young and gung-ho.

A good test for any superhero show: Would this be an interesting show without any superpowers or action scenes? Is there anything of substance behind the mask? Agents of S.H.I.E.L.D. is barely interesting with superpower action scenes. But you could take the Flashiness out of The Flash and have a decent twenty-something drama, or extract the Green Arrow from Arrow and have a decent one-percenter soap opera. Lengthy side plots in Arrow have nothing to do with the Green Arrow, but plenty to do with the drama between Oliver Queen and his friends.

In a way, it’s no surprise the CW manages this challenge. After all, the CW is the heir to the WB, the network that launched Buffy The Vampire Slayer, the Joss Whedon show that deftly grafted high school drama and angst onto supernatural battles. Buffy’s worried about slaying vampires, yes, but she’s also worried about prom and graduation. (Partly, to be fair, because prom is besieged by demon dogs and the graduation speaker turns into a giant snake.)

Smallville ran a full 10 seasons, partly by withholding a lot of the superhero mythos (flight, for example) for a very long time. But it also strapped it all on a backbone of teen drama, which surely helped. Soapy plot twists are far cheaper than flashy special effects.

That doesn’t mean that every superhero show needs to be a teen drama. If Gotham was truly able to turn into a more subtle corrupt-cop show, in the style of The Chicago Code, it could be sustainable. For now, however, it has cops standing around essentially saying “Man, we are so crazy corrupt, ain’t we?” Corruption is subtle and pervasive. It’s about culture, and Gotham struggles to do anything subtle.

ABC’s No Ordinary Family tried to turn family drama into its superhero show, but its family dynamics were so dull and pedestrian it didn’t matter. Give the folks on Parenthood superpowers (Max already has superhuman tenacity on Skittles-related matters) on the other hand, and that would be interesting.  And is there any doubt that Agents of S.H.I.E.L.D. would be better if it were run by Shonda Rhimes? (Rhimes is maybe the one show-runner who could write a version of Wonder Woman I’d watch.)

All of this, of course, is to say the secret to having a good superhero TV show is to have a good TV show, then just add superheroes. Even Batman can’t save leaden dialogue or dull characters.

Spokane attorney: State hospital patients with no mental illness should be released