It's here! Happy Meow-loween, everyone!

This year's Cat Friday Halloween Cats Photo contest received many amazingly adorable entries. As with last year, we're sharing all the submissions in today's post. But to reward our participants for their efforts — getting a cat to wear a costume and politely pose for a photo isn't easy — we're giving away a $20 gift card to one winner. Since we're a Spokane-based paper, we thought it appropriate to choose a gift card to a locally owned business catering to pets, and to a resident in our readership area. We intentionally left the rules pretty fuzzy at the beginning of the contest this year, because as with last year — who knew how many submissions we'd actually get? Surprisingly, the contest again received many entries from way outside of the Inland Northwest, which is pretty awesome.

This isn't to say we didn't appreciate all the out-of-town submissions. Considering the success of this contest for two years in a row, we're already planning to up the ante next year and get some better prizes lined up. It seems dressing up pets for Halloween has become just as big of a deal as dressing your kids or yourself. The proof is in the results of this little contest, and others hosted by major cat culture sites like Catster.

And now, the costumed kitties! 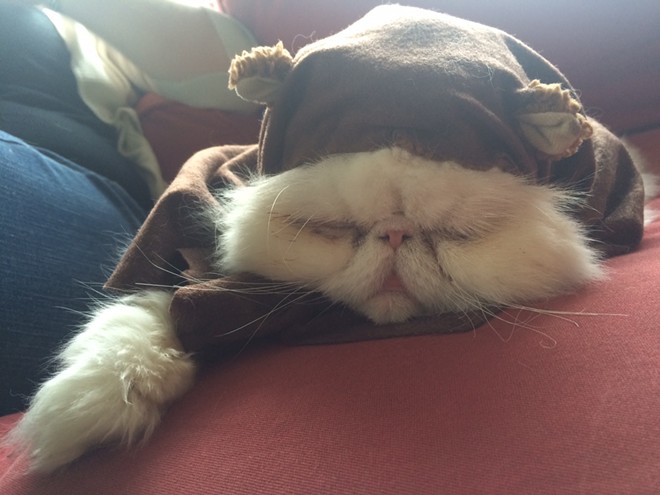 Gwen the Ewok, from Olympia, Wash. Submitted by Anna E.
click to enlarge 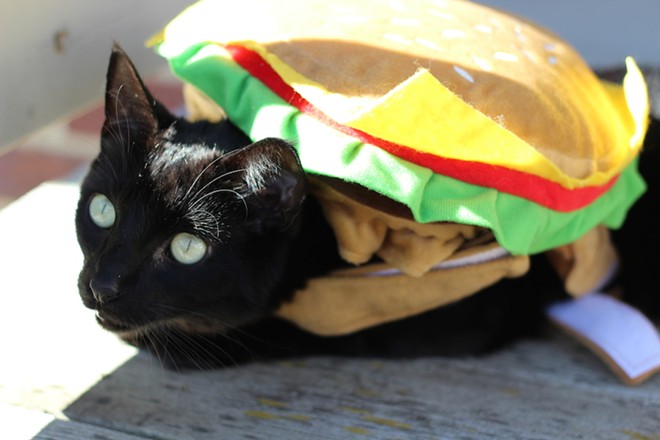 Tom, aka the "Burger King," from Georgetown, Delaware. Submitted by Ai K. 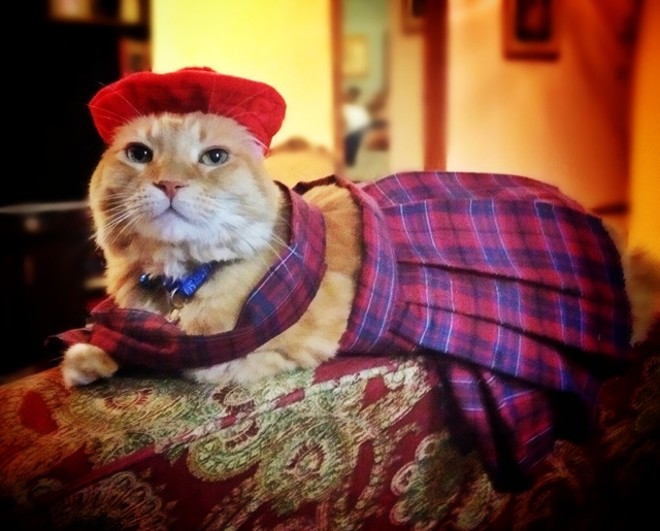 Morris dressed as a dapper Scottishman. He's from Orlando, Florida, and his photo was submitted by Clare D.
click to enlarge 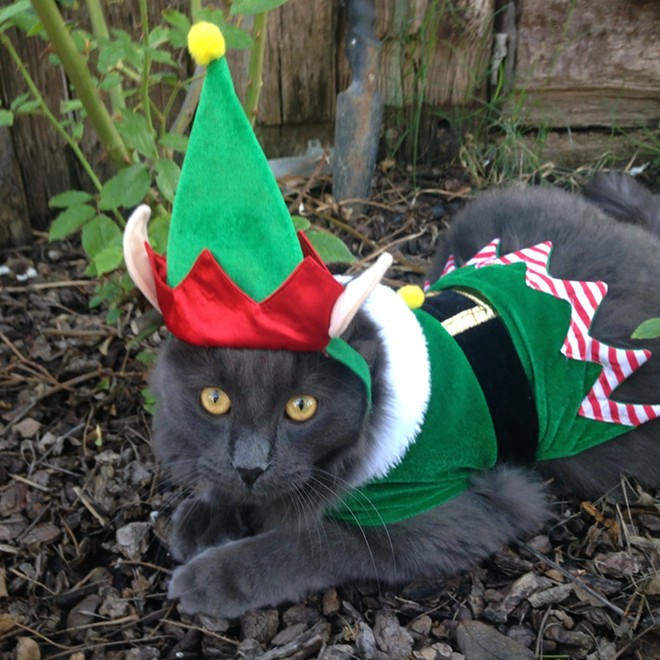 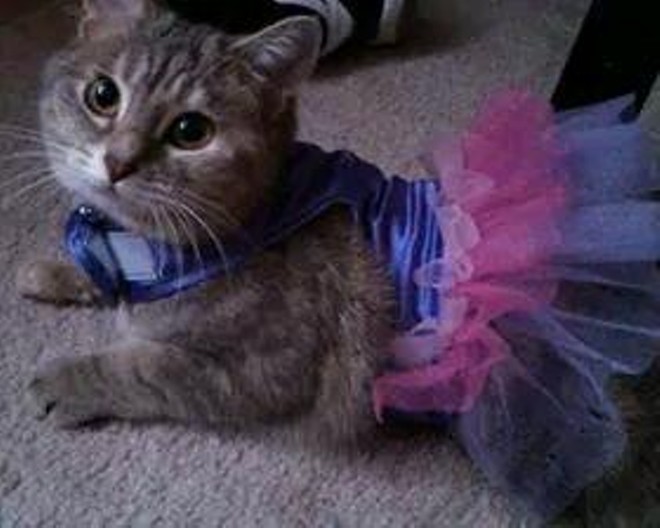 Bubbles the fairy, from Henrico, Virginia. Submitted by Beth W.
click to enlarge 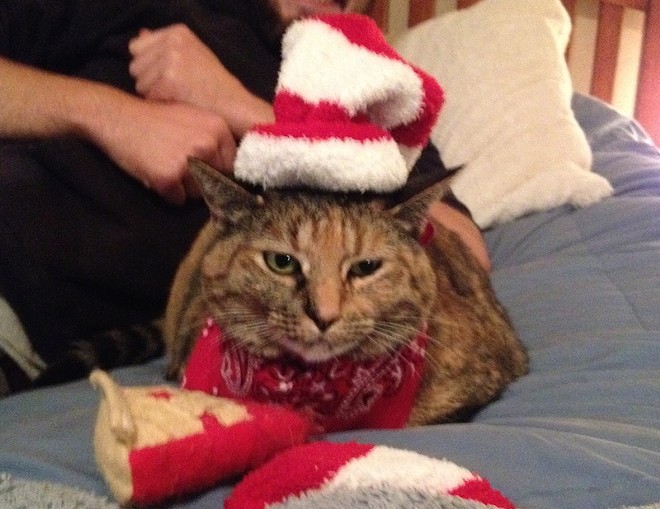 Sylvie the elf (with a slice of pie), from Olympia, Wash. Submitted by Stephanie S.
click to enlarge

Maddie, the 1,000-year-old sorceress cat, from Spokane, Wash. Submitted by Will H.
click to enlarge 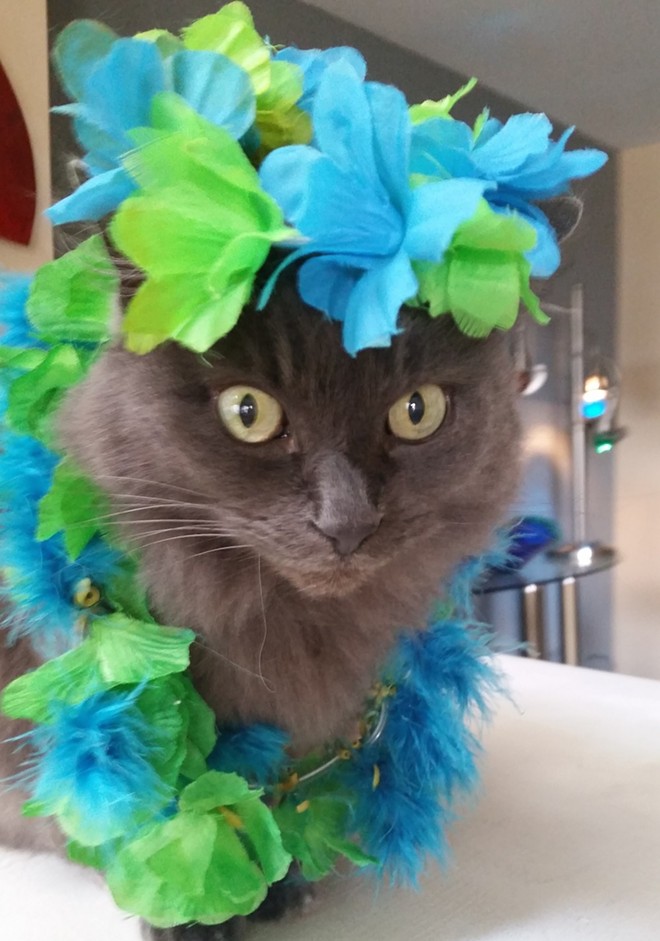 Poseidon, from Walled Lake, Michigan, dressed up as a Hawaiian hula cat. Submitted by Michelle B.
click to enlarge 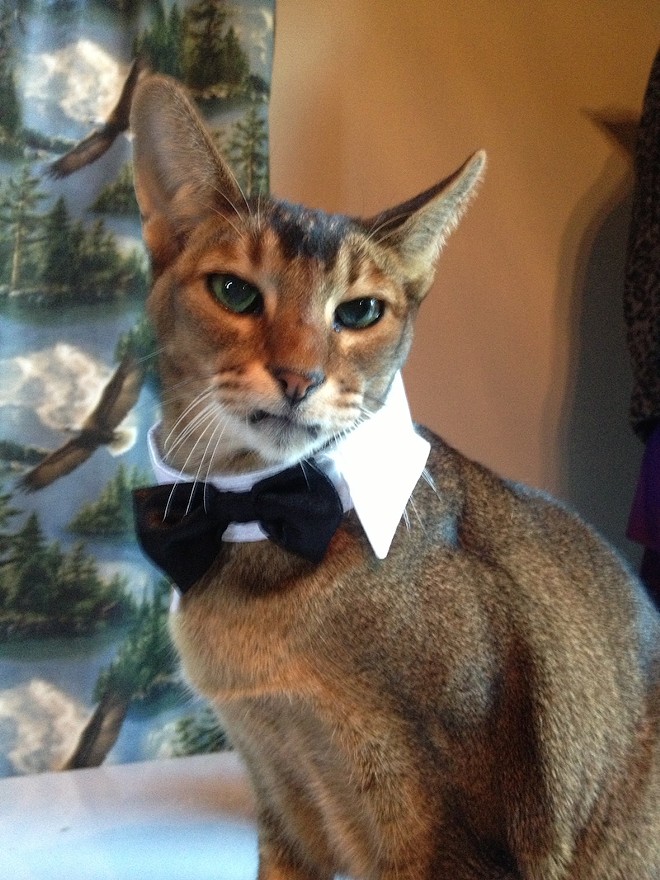 Leaper, from Columbia, Pennsylvania (who also entered last year!) dressed up in his dinner tux this year. Submitted by PJ L.
click to enlarge

Ash, of Spokane, didn't dress up, but is still very festive as he "contemplates mortality and the absurdity of existence." Submitted by Jennifer L.
click to enlarge 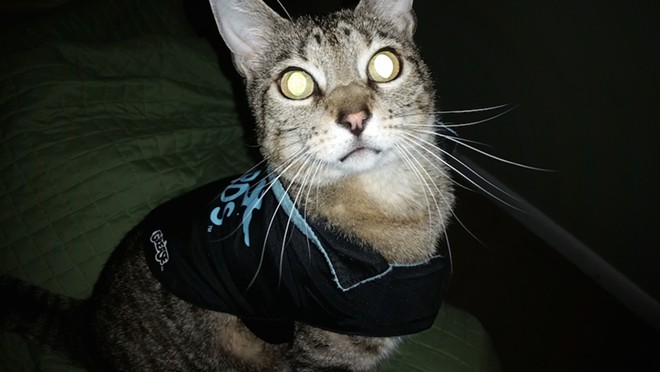 Timmy, of Spokane, dressed up as Danny Zuko from Grease. Submitted by Jessica L. 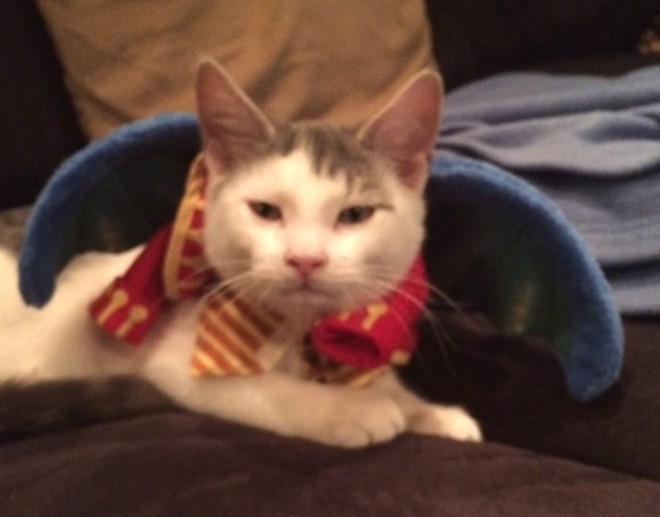 Blinky, from New York City, is a flying monkey from the Wizard of Oz. Submitted by Isis K. 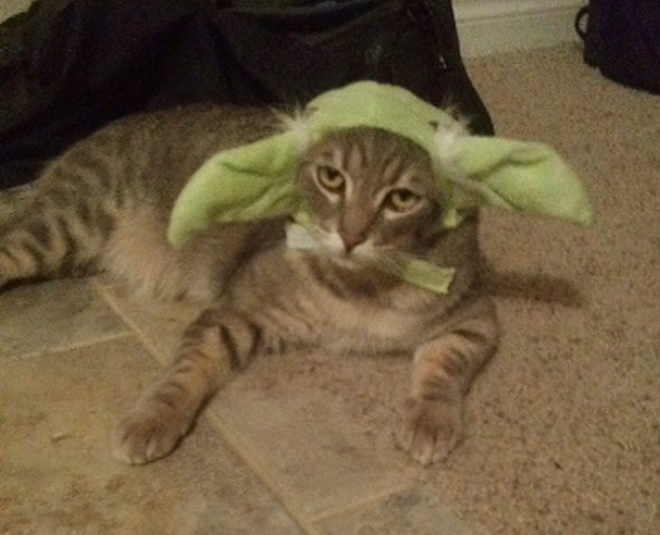 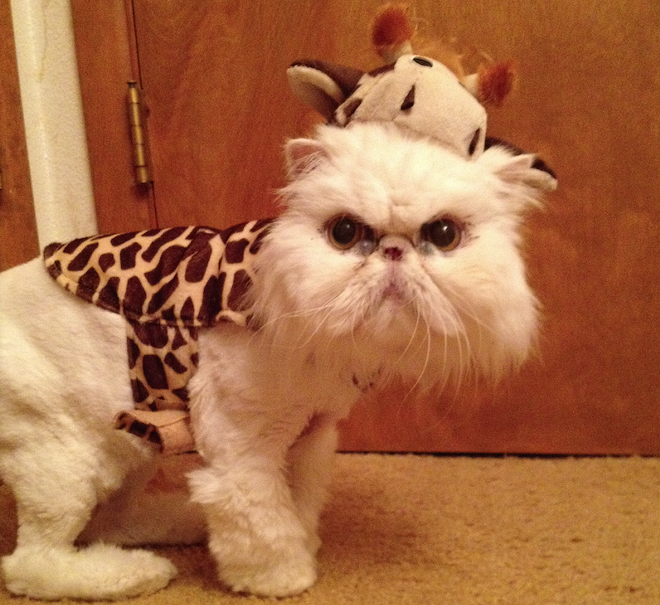 Abby the giraffe, from Spokane. Submitted by Bruce D., an Inlander staffer. 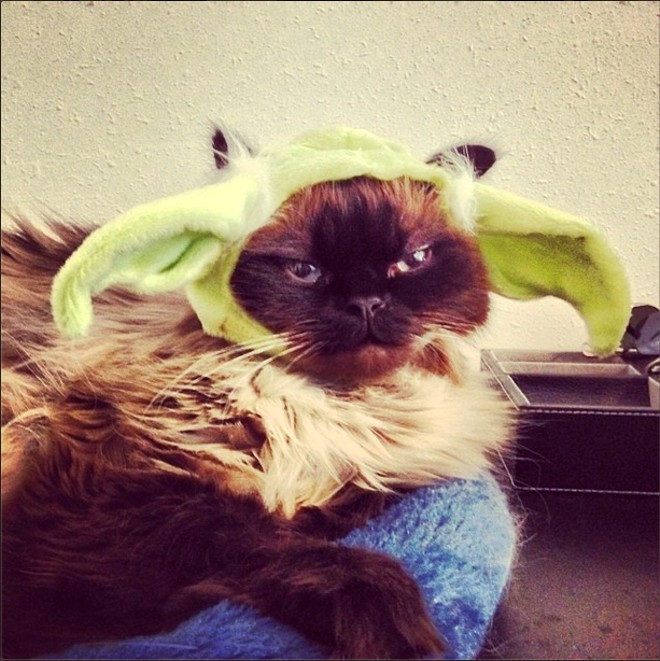 Samwise as Yoda ("Kill you for this, I will."), from Spokane. Submitted by Ali B., also an Inlander staffer.

And now, announcing the winner of this year's Cat Friday Halloween Cats photo contest, Oliver the Cat-osaurus Rex, from Spokane! Congratulations to Oliver and his owner, Chelsey. Please email me (cheys@inlander.com) with your top three favorite Inland Northwest pet supply stores, and we'll do our best to get you a $20 gift card to one of them. 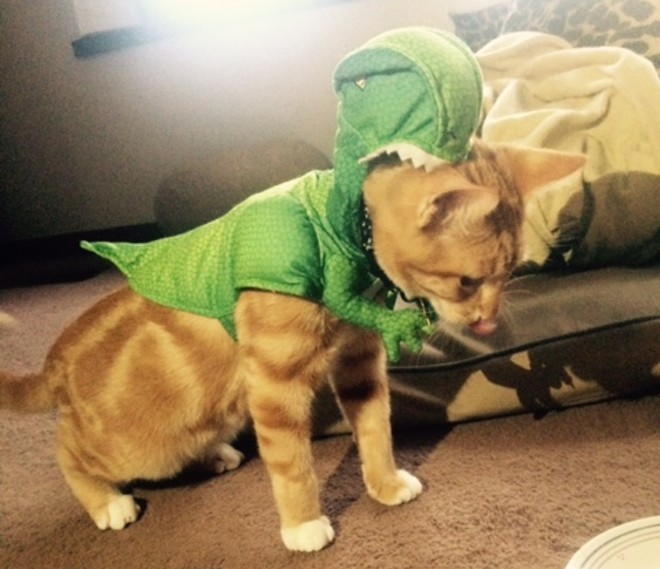 Oliver, of Spokane, is a cat-osaurus rex. Submitted by Chelsey J.

Thank you to ALL cats who entered this year. We hope readers enjoy this year's line-up of fabulously costumed kitties. As a disclosure, Inlander staffers who entered did not qualify for the prize. For ethical reasons, we also did not include submissions by those who personally know this writer in the final contestant pool.

How can we make next year's contest even better? Please send us your suggestions or leave them in the comments. Also, remember to keep your cats indoors and safe tonight as festivities take place around your neighborhood!

If kids could vote, Cathy McMorris Rodgers would win and universal background checks would pass