If kids could vote, Cathy McMorris Rodgers would win and universal background checks would pass 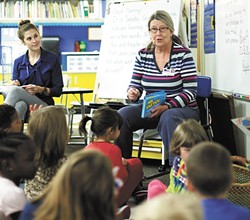 Student-voter turnout, according to a proud press release from the Secretary of State's office, was the second-highest in Mock Election history. (Hey grown-ups, think we can do better?)

Kids in Spokane schools voted to send Republican Rep. Cathy McMorris Rodgers back to Congress, 57 percent to 43 percent. They also would create a headache for the state Supreme Court by passing both of Washington's dueling gun initiatives: 56 percent supported I-591 while 68 percent approved I-594. You can click here to see the full breakdown of results by county, city and school.

For the voting adults out there, check out all of our election coverage here.

Everything you need to know for Election Day!