Ballot proposal would change how Spokane mayor's salary gets set

While most city officials seem open to a proposal filed today to change how the mayor’s salary gets set, Spokane city council members may conflict over the timing of a ballot measure that would put the matter before voters next year.

Councilman Mike Fagan filed a ballot proposal today that would alter the city’s charter to have the Salary Review Commission, the same entity that sets the city council’s salaries, evaluate and set salary for the mayor. The issue arose earlier this fall after a preliminary budget included a $7,000 raise for the mayor. 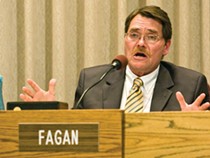 “It’s very, very simple,” he says. “All we’re proposing is using the same mechanism [as applies to the council.] That is as simple as you can get.”

City council members had voiced strong opposition to the mayor’s proposed raise, sparking a strong public debate over whether the existing charter rules still served as the best method for determining salary.

Mayor David Condon has since declined the raise and the city council on Monday approved a 2015 budget that stripped out a number of proposed raises for city officials and exempt employee positions.

Meanwhile, Fagan scheduled three public forums on the issue, noting a total combined attendance of just 10 people. In hopes of putting the issue before voters on the February ballot, he hurried to file a proposal this week for the council.

“I made the decision to step forward and address the issue myself,” he says.

The ballot proposal would shift responsibility for the mayor’s salary to the Salary Review Commission. Fagan noted that commission might have to be restructured to ensure an impartial decision, but he felt it would be the best alternative. The mayor proposed a similar change recently as part of an Affordability Plan.

“It’s something that the mayor supports,” city spokesman Brian Coddington says, “and it’s probably the next step in the conversation.”

Council President Ben Stuckart says there has not been much prior conversation, arguing Fagan filed the proposal without bringing it through the regular committee process. Stuckart says he doesn’t oppose the idea, but opposes the way it has been rushed through the process.

“The timing needs to be discussed," he says.

Stuckart explains Spokane Public Schools and Spokane Transit Authority officials have contacted him about the potential impact on their upcoming ballot measures. The council president says the salary issue unnecessarily “muddies the water.”

When the proposal comes before the council, Stuckart says, he plans to argue for delaying the issue until the ballot in August. Fagan says he doesn’t understand why Stuckart would let schools or the STA dictate how the city operates.

“Changing the charter is really, really an important thing,” Fagan says. “If this was as hot-buttoned as everybody says it was, why are we pushing this back to August?”

The council will likely discuss the issue in greater detail next week.

Celebrating 60 years of spreading the "stoke"