Whether it's catching up around the water cooler on a Monday, or making small-talk with coworkers at your office Christmas party, you need to be conversant in the latest sports news. That's where Monday Morning Placekicker comes in. Check it out:

EAGLES END SEASON IN BRUTAL FASHION
Everything was set up for Eastern Washington to make a run to at least the Final Four this season. They won the Big Sky despite missing an injured Vernon Adams, Jr., for a few games. The star QB returned in time to lead the team to a win over rival Montana in the regular season, then again against the Griz at home in the Eagles' first playoff game.

Hosting Illinois State on Saturday, the Eagles saw their season come to an abrupt end at the hands of a superior offense. The Redbirds racked up 59 points and 542 yards and held on to the ball for nearly 37 minutes. It's pretty hard for Adams to do his thing if he's on the bench, but that's where he was most of the day. EWU did run up more than 500 yards and 46 points themselves, but three turnovers (compared to none) did them in.

Adams will be back for one more year, so there's no reason to expect EWU to dive in the Big Sky standings any time soon. The big question is whether they can keep coach Beau Baldwin. And even bigger — can ANY of the Big Sky teams keep up with their counterparts in the playoffs anymore? Been a few years since the Eagles title.

While the season might be over, we still suggest you check out our awesome photo gallery from Saturday's game.

ON THE UPSIDE FOR EWU SPORTS
The Eagles' men's hoops team already has one signature road win this season, taking out the Hoosiers in Indiana. Sunday, they nearly got another in Seattle against the No. 17 UW Huskies, falling 81-77. The Eagles took a 12-point lead into halftime, and battled to hold off the Huskies' comeback throughout the second half. UW didn't take the lead until just 1:27 was left in the game. After starting the game hot from outside, the Eagles were just 4-for-17 from 3 in the second half, and that did them in. The team has another crack at a Pac-12 team coming up at Cal before the Big Sky season opens. At this point, EWU is clearly a frontrunner for the conference title and a potential NCAA bid.

ZAGS BACK ON TRACK
A week after the heartbreaking overtime road loss to Pac 12 favorite Arizona, Gonzaga packed up and headed on the road again for a showdown with a legendary basketball power also from the Pac 12, UCLA. 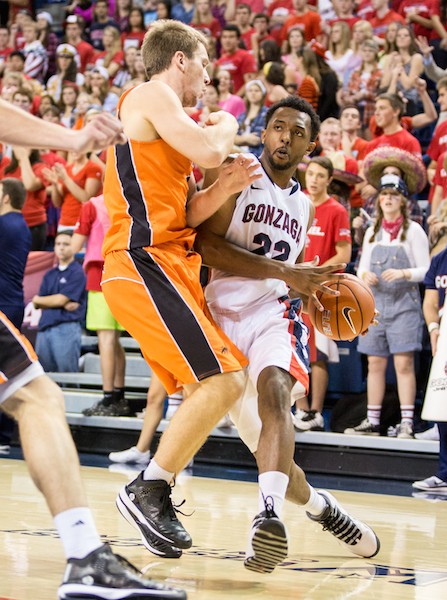 Ryan Sullivan
Unlike the back and forth, wire-to-wire barn burner in Tucson, Saturday's matchup with the Bruins in Westwood was pretty one-sided, with the Zags exerting their size and deep bench on Steve Alford's club from the get-go. They were up 11 at the half, ended up winning by 13, and showcased Kyle Wiltjer and Byron Wesley, both of whom ended up with more than 20 points. Both teams hit nine three-pointers, but the Zags shot 59 percent from the field on the night, while holding UCLA to 42 percent. That's all you really need to know.

Tonight, Gonzaga is back in action in Spokane, matching up with a 1-7 Texas Southern team that should be a gimme before the team goes to Seattle to face Cal Poly on Saturday. In other words, the Zags are a Top 10 team — No. 8 in the latest AP poll, to be exact — heading into the conference season, and looking like a team ready to roll into March with a high seed in the NCAA tourney as long as everyone stays healthy.

The most exciting part of the game was having ESPN's Dick Vitale on the call, making his first visit to UCLA in 15 years. You might consider his style over-the-top, but he's still a PTPer in the announcing game, and hearing him sing the praises of Gonzaga coaches, players and program while they mopped the floor in the House that Wooden Built was pretty damn cool.

SEAHAWKS POISED FOR A RUN
Sunday's game against the 49ers wasn't quite as dominating as the beat-down the Seahawks put on San Fran back on Thanksgiving, but the 17-7 win knocked the Niners out of playoff eligibility, so it was particularly sweet. And the Hawks have the look of a team ready to make a serious run in the playoffs to defend their Super Bowl crown.

The D? Utterly dominating right now. They've only given up 27 points total over the past four games. That's just freaky-good in the NFL, as Grantland duly noted. The offense? Not exactly lighting it up, but Marshawn is Beasting again, Wilson continues to be scary-efficient, and last year's squad wasn't exactly scoring at a furious pace before Seattle crushed the Donkeys in the Super Bowl. The schedule looks good, too, as this week's opponent, the division-leading Arizona Cardinals, have to face the Seahawks with either their third- or fourth-string quarterback behind center. That should go well for them. If the Seahawks win the division, they'll host at least one home game, and with a little help from the Cowboys, Packers and Lions — help in the form of losing — Seattle could suddenly find themselves with home-field advantage throughout the playoffs.