Lucinda Williams was perhaps just being gracious when she said early in her sold-out show Saturday that the cheers greeting her after show opener “Steal Your Love” were “the best Valentine’s Day present I could get.”

Even if that’s the case, there’s no questioning the sincerity with which she delivered her searing songs of love, failure and redemption to a rabidly receptive crowd filling the Bing Crosby Theater. Backed by only three stellar musicians, Williams touched on all eras of her decades-long career, pulling her setlist from no less than nine different albums for a performance that included blues (of both the slow-burn and roadhouse-stomping varieties), country, folk and rock. And all of it was led by a performer who seemed as happy as the audience to be there, and equally awed by the prowess of her backing players as she shimmied and swayed to their sounds when she wasn’t playing along on guitar herself.

The 62-year-old hit the stage all in black, from her leather jacket and boots to her jeans, focusing on her nearby music stand for lyric reminders as the show built momentum from a strong start that continued from “Steal Your Love” into an excellent take of “I Just Wanted to See You So Bad,” a song Williams noted was recently recorded by Emmylou Harris and Rodney Crowell.

A couple of songs from Car Wheels on a Gravel Road, arguably Williams’ masterpiece from 1998, followed in “Right on Time” and “Drunken Angel” before she introduced the audience to several songs from her newest work, Down Where the Spirit Meets the Bone. “West Memphis,” inspired by the story of the West Memphis Three, had Williams singing from the perspective of one of the falsely accused child murderers. “Cold Day in Hell” was a relatively straightforward blues number, leading to the band departing the stage for Williams’ brilliant solo acoustic version of “Compassion,” a song she adapted from one of her recently deceased father’s poems. A call to offer compassion to even those “who don’t want it,” the song hit hard with lines like “You don’t know what wars are going on, down where the spirit meets the bone.” 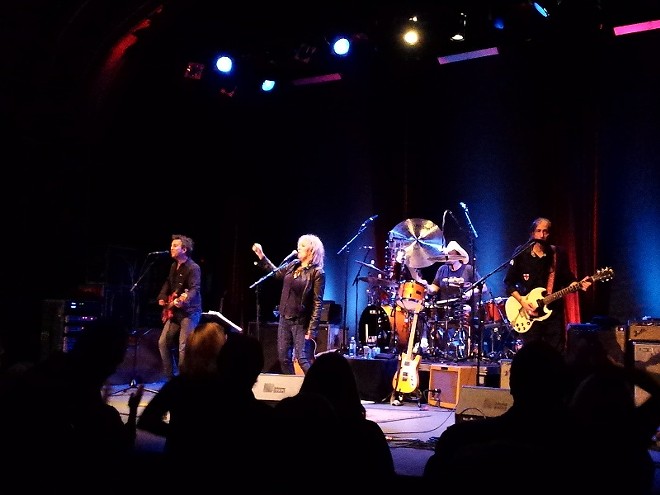 Guitarist Stuart Mathis, brilliant all night whether picking delicate guitar lines or delivering genuinely monstrous riffs, rejoined Williams on stage for a duet on “Lake Charles,” and bassist David Sutton and drummer Butch Norton then returned for the remainder of the show as Williams hops-scotched across her catalog.

There were several potent highlights. She dedicated “Copenhagen” from 2011’s Blessed to the “victims of yet another shooting today, in Copenhagen. When will it stop?”

“Are You Down” built into such a killer instrumental jam between the members of Williams’ band that it inspired a mid-show standing ovation. And a flurry of songs to close the set got progressively louder and more energetic, from a sneering “Changed the Locks” to a gritty “Essence” and “Joy.”

After the show-closing “Honey Bee,” Williams returned to the stage, glass of red wine in hand, and effusively thanked the crowd before reaching way back for “Hot Blood” from 1992’s Sweet Old World, telling an obedient audience to get on its feet and dance. They stayed up for “Righteously,” and “Get Right with God” closed the show down.

Except the crowd wasn’t having it. Williams and her band returned for a second encore, Neil Young’s “Rockin’ in the Free World.” That tune’s been covered a million times, but Williams managed to make it fresh, and the audience was happy to pump fists alongside the brassy woman in charge.

“Happy Valentine’s Day!” Williams yelled as she left the stage. “Power to the people! Don’t give up the fight!”

Judging by Saturday’s show, this woman who’s survived all manner of personal and professional travails has plenty of fight left.