“I don’t even know who Riff Raff is,” says the woman nearby in head-to-toe denim. “I’m here for the beer but I really only listen to, like, Johnny Cash.”

Glowsticks are tossed from the balcony around us and from every direction, some landing in people's drinks below. But, let’s face it, if unadulterated (mindless?) fun is serious business, then Riff Raff has made quite the case for being one of its most frustratingly foremost CEOs. In fact, glowsticks landing in your $6 beer seems fitting. This is no place to sip and ponder. Any attempts to nitpick the much-debated Riff Raff persona, particularly in the wake of the Spring Breakers fallout involving James Franco, have mostly dissolved.

It was with rave-like ceremony that Riff Raff finally took the stage at the Knitting Factory last night — after overcooking the hype with a too-long series of gracious but underwhelming opening acts. Donning neon shorts, a loose tank top, and a hilarious fur hat, Riff Raff moves across the stage like that guy you knew in college who loved the Lonely Island but never laughed at them.

This is essentially Panama City Beach, YOLO reincarnate, pre-pre-molly music and, on that level, it occasionally manages to work. There is a bizarre anti-charm to someone who uses Miley Cyrus’s face as a backdrop without using her Mike WiLL Made-It collaboration “23” as a lead-in to his own ode to Jordans (“Tip Toe Wing in My Jawwdinz”), then does a brief cover of iLoveMakonnen’s ”Tuesday” on a Friday and doesn't capitalize on the easy joke. 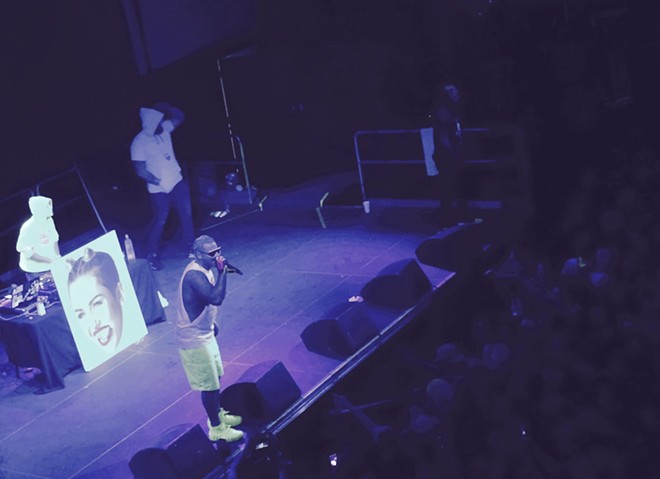 Ultimately, it’s difficult to dismiss Riff Raff. As soon as you’re positive he’s lampooning, he lets loose a vicious sneer that implies he’s absolutely for real. Though there isn't much to speak of musically, aside from anthems “Dolce & Gabanna” and “Tip Toe Wing in My Jawwdinz," which both elicit huge responses, there still seems to be plenty to speak of with regards to the elusive identity of Horst Christian Simco, aka Jody Highroller, aka Riff Raff.

Riff Raff is still most interesting on that perceived divide between the two — between Franco and Neon Icon, between performer and art conceived.

And thankfully, he still walks the line.