When it came to medical school plans, Washington State University looks to be getting exactly what it wanted from the Legislature. Both the House and the Senate budget proposals give the school the $2.5 million it needs to begin
click to enlarge 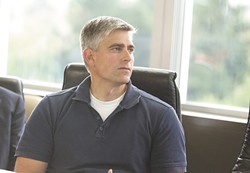 Young Kwak Photo
Sen. Michael Baumgartner pushed hard for a WSU med school in Spokane, but UW med students worry the Senate's budget could imperil their own program.
to create a new medical school in Spokane.

Not the case for the University of Washington. The Senate budget gives UW $2.5 million for medical education in Spokane over the next biennium, but that's a big cut from the $9.4 million that the UW program had been receiving. While the House budget would continue to provide enough to expand the UW class from 40 to 60 students in Spokane, UW argues the Senate budget would put the future of the medical program in jeopardy.

In the past, Sen. Michael Baumgartner has suggested that UW could find the additional funds needed to continue in Spokane elsewhere in the school's $6.4 billion budget.

But UW suggests that there's no slack to make up the difference.

"We got $4.7 million [per year] appropriated by the legislature. That’s what we use to educate our students there. If that goes away, there’s no other source replace it," UW spokesman Norm Arkans says. "What are we going to do? Cut English majors? Cut computer science majors? ... We’re a very tightly budgeted institution. We either have the money or we don’t."

And if UW medical education disappears in the Spokane, what happens to the students who're already counting on it?

They're worried. Yesterday, they sent this letter to the legislature. (Emphasis added)

We write today in support of continued funding for the University of Washington School of Medicine’s (UWSOM’s) Spokane WWAMI program. As the incoming class of UW Spokane medical students, we are eager to contribute to the Spokane medical community and give back to the people of the Inland Northwest. The Spokane WWAMI program delivers doctors now to meet an ever-increasing physician shortage. We are the future of this program and are incredibly grateful for the unparalleled education Spokane WWAMI provides. Our class includes a variety of students from many backgrounds. Some of us are in the process of moving our families to Spokane and have school-age children. Many of us were raised in Eastern Washington and already call it home. All of us are excited to be a part of UW’s Spokane program, which connects us with phenomenal community-oriented teachers and clinicians.

Studying medicine in Spokane will be a unique experience that combines UW’s tried-and-true medical education techniques with a hospitable, neighborly mindset and a world-class health sector. We have heard stories of UW medical students who were unsure about studying in Spokane, but arrived to find welcoming residents and a dynamic community committed to their success. Many “Spokane Huskies” stay well beyond their commitment to become an integral part of the community.

We believe the future of Spokane WWAMI is bright and hope to contribute to its continued positive impact in the region. We take pride that WWAMI has been recognized as one of the most innovative training programs in the country, and UW has led the nation in primary care, family medicine, and rural medicine for many years. Our hope is to build on this success by extending care throughout Eastern Washington and the Pacific Northwest. Over half of UWSOM students choose primary care, which helps to curb the shortage of physicians, especially in rural areas.

We are concerned that the Senate’s proposed budget defunds Spokane WWAMI and threatens the program’s future. While forming a new medical school is a testament to our state’s commitment to expand future medical education, it would be wrong to punish UW students already committed to studying in Eastern Washington. We believe that reducing or eliminating our program will result in harmful short- and long-term consequences. On a personal level, this will stunt our class’ learning opportunities by impairing confidence in the program, thereby reducing our ability to retain and attract the dedicated faculty UWSOM is known for.

On a larger scale, we worry that removing UW from Eastern Washington will have serious regional ramifications. Accrediting a new school will likely take years, and closing the pipeline of medical students will only exacerbate the physician shortage. The future of medical access in our city and region is at stake. We are here now and willing to serve.

Our incoming class of medical students is thrilled to be a part of the Spokane community. We hope to both follow in the footsteps of our UW predecessors and lay the groundwork for future physicians serving Eastern Washington. Please consider fully funding our education and the future education of medical students in the UWSOM Spokane program.

The Entering 2015 Students of UWSOM Spokane