Dan Nailen
Any time you hit a "legacy" act concert, you go in with a few expectations, including a steady stream of the artist's biggest hits, a lot of nostalgic between-song banter, and a preponderance of extra pounds on both the musicians and the fans.

The Whitesnake show at Northern Quest Resort & Casino largely fell short in those areas, and was a better show for it. Rather than simply being a #ThrowBackThursday to the band's monster-sized hits (and hair) from the late '80s, the band led by David Coverdale offered a heavy dose of its new album, a collection paying tribute to Coverdale's years as lead singer of Deep Purple in the mid-'70s. That might have left some disappointed who wanted more tunes from the band's Slide It In, Whitesnake and Slip of the Tongue albums, but the focus on Deep Purple's boogie-oriented blues-rock provided a better showcase of what Whitesnake has to offer now, in 2015.

And what is that, exactly? Well, in Coverdale, you have a frontman in his 60s who is in fighting form, vocally and physically, and still busting out those mic-stand-thrusting moves — albeit not quite as emphatically as in the videos you might remember. In guitarists Reb Beach and Joel Hoekstra, you have two axe men with some serious flair, ripping out solos that would have done Deep Purple's Ritchie Blackmore proud. Keyboardist Michele Luppi managed to evoke DP's Jon Lord with his flourishes. And in the rhythm section, bassist Michael Devin was a multi-faceted asset, singing harmonies and playing harmonica, while drummer Tommy Adridge, a long-time Coverdale compatriot, pummeled his set with an energy dudes half his age couldn't muster. Seriously, that guy is turning 65 this summer, and he was ridiculously powerful in the casino ballroom the band turned into a purple-tinged square of raised fists, bobbing heads and tipsy fans reliving old glories.

About half the show was dedicated to The Purple Album, with the band taking the stage to album opener "Burn" and moving right in to the salacious "Lay Down, Stay Down." Subtlety was never a strong suit for Coverdale, lyrically speaking. But he is a charmer, thanking the crowd on hand early and often, and noting that a major part of the band's Live in 1984 album came from a Spokane show. When he wasn't complimenting snakeskin-clad women in the front rows, Coverdale was leading the band through Deep Purple cuts like the sinister "Mistreated," the ballad "Soldier of Fortune" and the sweeping "You Keep on Moving."

Given that these tunes come from the mid-'70s, most stretched to nearly 10 minutes, with all the musicians given ample time for long solos as Coverdale scooted around the stage, pounded his chest and pointed at various folks in the crowd. And the crowd totally ate it up, singing along to the songs they knew, and taking pics with their cell phones non-stop when they didn't. This was my view for much of the night:

Dan Nailen
For folks in the back of the packed room, much of the concert was better viewed on the big screens on the sides of the stage, ala:

Dan Nailen
When the band did get into the most familiar hits of Whitesnake's commercial heyday, the audience clearly perked up. "Love Ain't No Stranger," which Coverdale dedicated to former band members John Sykes, Neil Murray and Cozy Powell, as well as "Give Me All Your Love Tonight" and "Is This Love?" all were popular selections of the band's hair-metal years.

After a dramatic take on The Purple Album's "Stormbringer," the band got into its biggest commercial hits, and probably the tunes that attracted much of the crowd at Northern Quest on Thursday. "Here I Go Again" was a massive singalong, with Coverdale thrusting his microphone toward the crowd throughout. And if you needed any reminder that this guy was born to walk alone, check out his Twitter and compare his number of followers vs. the number of people he follows: 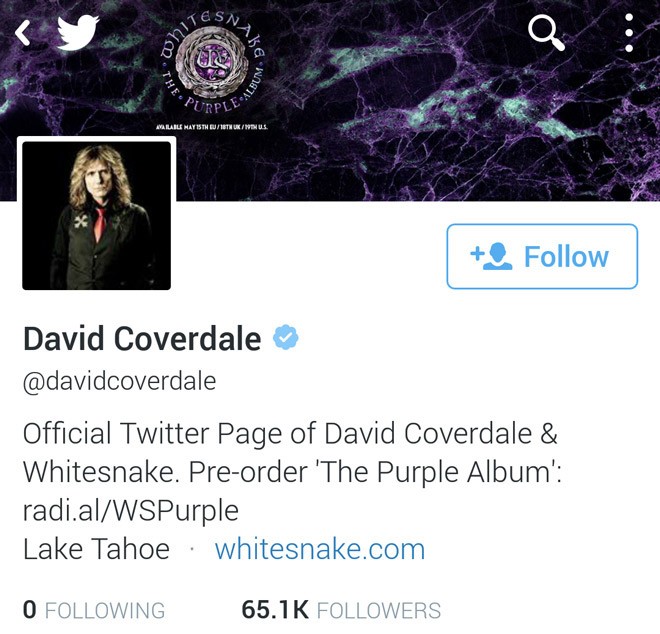 An encore of "Still of the Night" was what I personally waited for all night. The epic song that introduced the Tawny Kitaen-starring videos of the '80s sounded great. But by that point, I'd found the band's focus on the Deep Purple tunes I wasn't familiar with to be the real reason to see Whitesnake in this day and age. The songs were old, sure, but didn't sound stale, and Coverdale and Co. clearly were enjoying the chance to play them. This being the first night of a lengthy U.S. tour, the band was in fine shape.

Inlander staffers share some of their must-sees at Volume 2015