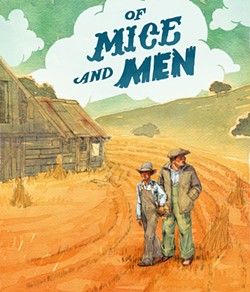 This blog post may contain spoilers. Do not continue reading unless you have finished Of Mice and Men, or at least the CliffsNotes version.

Ever since the Coeur d’Alene school district began considering demoting Of Mice and Men from its curriculum list for approved whole group instruction to small group instruction, the district has been flooded with comments.

One, from former Coeur d’Alene school board member Ann Seddon, suggested moving the book to a higher grade level because of the dark themes and language content.

George was implementing euthanasia. Is this an appropriate discussion for 9th graders and left to the teachers address this subject? This will be for you to decide. I personally, would not want my child’s teacher to have latitude in the discussion of euthanasia. This is a discussion I believe is best handled at home.

…
As for the controversial language, this book is a good starting point for board discussion of appropriate language. Some words do not fall under the category of “profane”, but are objectionable to many Christians. Should “dirty words” and cursing of God and Jesus be put in the same category? Should we ask if blasphemy of Mohammed would be treated the same way?

But most comments were skeptical or downright contemptuous of the idea, like this passage from a particularly sarcastic letter:

Ultimately, the question arises, Why books at all in school? Our children have television and the internet for culture where they will never encounter cussing and filth, only family values and traditions such as those in the Bible. Burning books is the best way. I attach a photo of the Nazi book burning in 1933 for you. You could arrange this at school with the books you don't like, bake cookies over the flames, and raise funds in a bake sale for better things for schools than books.

Tonight, starting at 5 pm at 1505 N. 5th Street, Coeur d'Alene, the school board will consider the community advisory Ad Hoc Curriculum Committee's recommendation to remove the book from whole-group instruction.

To be clear: The question isn’t whether to ban Of Mice and Men from schools. If the recommendation passes, the books won’t be removed from libraries or classrooms. Kids can still bring it to school, check it out from the library, students can still read it, and teachers can still choose the text for several students in the class. They can’t require it for the entire class. (Coeur d’Alene teachers, currently, still have the option to not assign Of Mice and Men for their classroom.)

School Board member Christa Hazel remembers reading the book when she was a high-schooler in the Coeur d’Alene school district. “I reread it, in light of some of the concerns,” Hazel says. “The hard issues, like euthanasia, racism, classism, and poverty… I think that the teachers can have an appropriate discussion about it.”

And if parents disagree, there’s already a process for them to opt their children out of reading the book, Hazel points out.

But that hasn’t happened.

“Of Mice and Men has been an approved book of the school district since 2002,” Tom Hearn says. “It’s interesting that it’s been approved without any parental complaints all these years.”

Hearn believes the school board will vote to keep the book on the whole group instruction list. But that’s not the only question the board will be dealing with. They’ll also be considering how R-rated movies are handled, and whether to change the Ad Hoc Curriculum Committee process entirely.

“Some of us have some concerns for how this curriculum committee is structured,” Hearn says.

Check out the whole reading list, from grades 6 through 12, right here.

I've pasted the books that are already on the more restrictive small group approved reading list below: