Why Idaho Rep. Vito Barbieri sees Islam as a "threat" 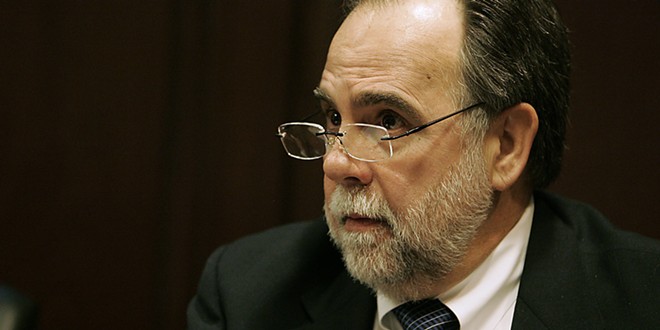 This guy doesn't like Islam so much.
Yesterday, Idaho Rep. Vito Barbieri (R-Dalton Gardens) posted a video on his Facebook page from Eric Allen Bell, documentary filmmaker of American Infidel.

Titled "Muslim Blooper Reel," it features over 14 minutes of Islamic extremists calling for death to Americans, Jews and homosexuals,  threatening destruction and calling for the implementation of Islamic Sharia law.

"Islam is at the door," Barbieri wrote on his page. "But it isn't knocking. Islam in its own words. If we believe the press, it is a violation of America's religious freedom to resist this invasion. The times, they are a twisted!"

I called him up and asked to him to explain.

"I am not worried," Barbieri says. "I am not afraid. I’m only pointing out that here is a threat to America’s way of life ... If you view that video and don’t believe that it’s a threat, you have your eyes shut."

I ask him what he means by Islam "isn't knocking?"

"They’re breaking in," Barbieri says. "I think it’s pretty clear from the tone of the video. Violence is their modus operandi. They’re not just coming in to the nation, with some idea that they’re gong to assimilate. They have a distinct plan."

But with so many Muslims in the United States that are peaceful, why focus on the relatively few extremists?

"If you have a criminal element of a population, let’s just say 1 percent. And 1 percent of how many people that are in the Islamic state? Let’s just say a billion. How many individuals is 1 percent of a billion?" Barbieri says. "If they’re planning the destruction of the American way of life, do we just ignore that because of the [peaceful] 99 percent?"

And what would he say to Muslims who may take issue with his characterizations?

"I think that they should stand up and be very vocal against the criminal behavior of the minority," Barbieri says. "I think they may be fearful of doing so. Because of the violence that’s threatened."

At the bottom of Bell's video, Bell wrote:

I ask Barbieri if he agrees.

"I agree that there’s no question that [Islamic] Sharia law poses a threat to all of those precepts," he responds. He says that Sharia should be considered "civil law' more than "religious law."

When I express skepticism that Sharia law had made genuine inroads in the United States, Barbieri refers me to Dearborn, Michigan. ("The city is no more under Sharia law than Roswell is under space alien law," Michigan Public Radio says of the town that "includes a strip club, a Roman Catholic school, city hall and a Honeybaked Ham store.")

Barbieri also mentions Islamic "no-go zones in France," where emergency personnel refuse to tread for fear of violence. (The anti-Islam critic who popularized the term, Daniel Pipes, now believes "the term no-go zone does not accurately reflect the situation.")

I press Barbieri for specifics — what should the legislature do in response? — but for the most part, he says he's just pointing out the threat.

"One of the things we’re considering is a civil-forfeiture provision in the law that’s talking about terrorism," Barbieri says "If we were to find that an individualism supported financially a terrorism act, and that individual was found guilty, we would add a civil forfeiture component."

In general, however, he believes the government should be "be much more scrutinizing of who they’re allowing in the nation."

"A lot of my constituents and a lot of constituents in Idaho are very concerned about the policy with respect to this particular ideology," Barbieri says. "I would say the fact that they communicate with me and tell me that they don’t only agree, but offer suggestions and perspectives — that is evidence that they are in tune with me... If that’s ever out of sync, that will be proven by elections."

THIS WEEKEND IN MUSIC: Elkfest, Neutral Milk Hotel and the Hop!’s final show