A brief history of skateboarding in Spokane 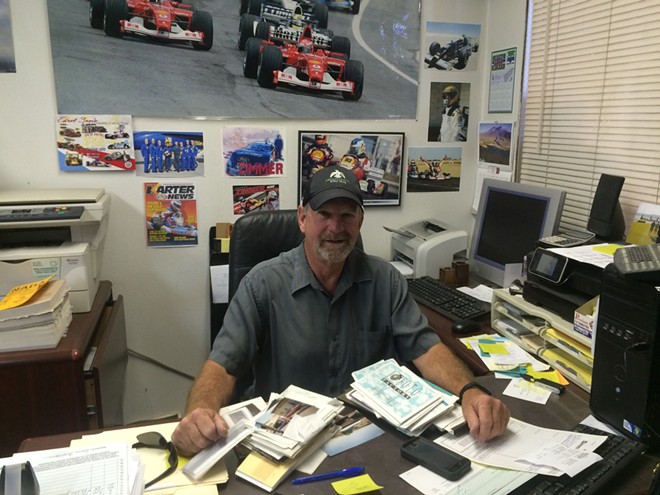 Vince Zimmer in his office at Alpine Haus Marina
The demolition of the Under the Freeway Skatepark last week leaves Spokane skaters with two options for public skateparks: Hillyard and Joe Albi in the Dwight Merkel Sports Complex. In the winter, local skaters say, they'll probably resort to shredding in parking garages because UTF was the only covered park in town.

When the city finally decided to flatten the beloved skatepark under I-90, it was but a phantom of its former glory. Scores of skaters of all ages showed up the weekend before its demise to show their support and to skate the poorly designed park one last time. Older skaters also came to show their support.

Josh Yandell, owner of Pistole Boardshop, says he used to skip a lot of class at nearby Lewis and Clark High School to skate at UTF. That was before the city installed ramps in the late '90s. Instead, Yandell says, they skated on old washers and dryers, cars and ramps they built themselves. (Check out part of the video screened at UTF Skatepark the Saturday before the demolition. Courtesy of Justin Marko).

But skating in Spokane started way before UTF, according to Vince Zimmer, who owns the Alpine Haus. Here is his story:

Weeks before Zimmer first opened the Alpine Haus at its original location in Lincoln Heights in 1976, two young kids smushed their faces against the store's front window. They were looking at the skateboards on display.

Zimmer invited the boys in, and they inquired how much skateboard stuff he'd ordered for the grand opening. Zimmer, a bit surprised by the question from the young teens, told them he'd stocked $2,000 worth.

A bit floored, but still curious about the punky kids who thought they could tell him how to run his new store, Zimmer invited the boys to lunch to talk some more. One of the boys, who eventually became a Spokane Police officer, suggested a slalom race tournament to kick off the grand opening. Eventually, Zimmer bent to their suggestions and the next day he doubled his order.

By noon the day after the Alpine Haus opened, every piece of skateboard merchandise was gone.

"That basically launched my business," Zimmer says. "I immediately re-upped for $10,000 of skateboard stuff and the next week it was all sold."

Zimmer says only one other shop in town was selling skateboards during that time, but they were charging above retail price, so kids couldn't afford them. When he opened up and offered the merch at retail, the skateboarding scene exploded. Kids came from Pullman, Colville and Coeur d'Alene to shop there, and they even started a skateboard slalom race team. Gordon Grant, the skater turned Spokane cop, was the best racer on the team, Zimmer says.

Zimmer's Alpine Haus is now called Alpine Haus Marina and mostly sells boats and boat supplies, but, he says, he never would have made it had it not been for those first few years of selling skateboards.

THIS WEEKEND IN MUSIC: Blackwater Prophet album release, Fest at Sandpoint & Gentlemen of the Road