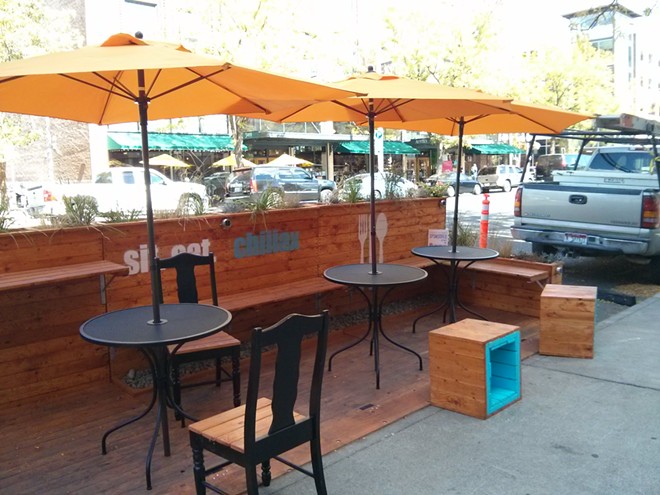 Chey Scott
The new parklet on west Main outside of Wollnick's went up overnight on Wednesday, Sept. 2.

The passersby are gawking and stopping in the middle of the sidewalk to check out the unusual sight, but not for the typical rubber-necker reasons. They're just wondering what, exactly, the rectangular wooden structure is, how it got there and why.

Just days after the Spokane City Council voted to pass a resolution to allow a 60-day parklet demonstration downtown, the parklet — a patio-esque park about the size of two parallel parking spaces on the edge of the street — materialized overnight. Situated in a loading zone (and no, it's not taking up metered parking spaces that were otherwise open to the public) just outside of Wollnick's General Store, the city's first-ever parklet was set up by the local nonprofit Yes (You Express Studio), which has been championing the idea since last year. For the past two years, Yes has set up parklets at August's Garland Street Fair to show the public how functional and welcoming the spaces can be. There was also a demo parklet at last year's Terrain arts showcase.

Tonight, the parklet will transform into a performing arts space for First Friday's arts walk around downtown; the event is being hosted by Wollnick's.

Around lunchtime today, Yes event coordinator and a board member Cara Forsman had donned an apron and pair of gardening gloves to spruce up some of the greenery in box planters lining the top of the outside wall of the parklet.

Forsman says Yes was waiting for approval from the city to set up the parklet, so when they got the go-ahead at Monday's city council meeting, a team of volunteers set up the structure within hours this past Wednesday. It's been the talk of the town since.

Wollnick's has offered to help manage the parklet, and takes the table umbrellas and chairs inside its store at night. The staff there also locks up the box-style benches and tables, and have agreed to help keep the parklet tidy and welcoming.

While the parklet is currently scheduled to stay open on west Main through October with its 60-day permit, Forsman says there is interest in opening another near the Saranac Building and possibly outside the Nudo Ramen House on west First Avenue.

"If the weather is nice, and next spring businesses want it outside their location, we'd like to continue what we've been calling this social experiment," she says.

The parklet's construction and materials were funded privately and by donation. Moving forward, Forsman says Yes hopes local businesses that want a parklet near them would help sponsor one since the cost to build one can run into the several thousands of dollars. Another issue the group also faces is finding a place to store the parklets once disassembled for the winter. 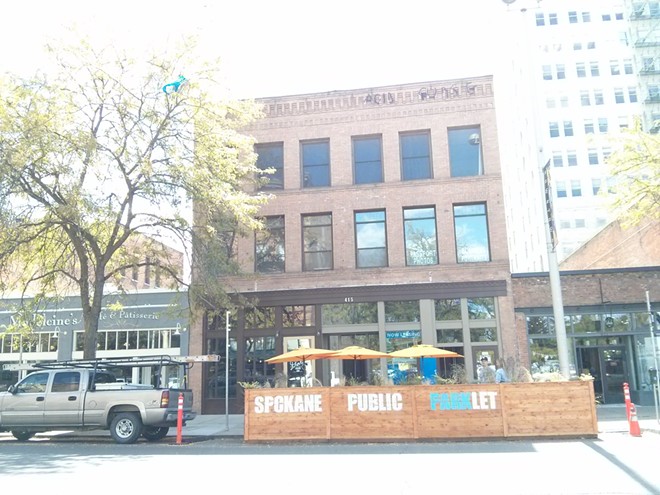 Chey Scott
The parklet is set up in a little-used loading zone, not public parking spaces.