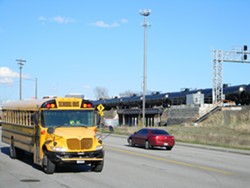 More potentially explosive oil trains will be traversing the Northwest, including through Spokane, as the result of President Barack Obama’s rejection of a controversial oil pipeline, according to a report commissioned by a Seattle environmental think tank.

The report was produced by Oil Change International on behalf of the Sightline Institute, and using the oil industry’s  modeling and forecasting tools, found that the Obama administration’s rejection of the Keystone XL pipeline, which would have carried 800,000 barrels of Canadian tar sand oil a day to the Gulf Coast, could mean that this oil will now just be transported by rail to terminals in the Northwest.

The problem with oil trains is that they sometimes derail and explode, and a Washington state Department of Ecology study has already found that the number of trains carrying this potentially volatile cargo is likely to increase. Opponents of the trains say that at least one of them passes through Spokane every day on their way to terminals in Western Washington.

“Oil companies lost the fight over Keystone, and that’s good news,” said Eric de Place, policy director for Sightline Institute, in a prepared statement. “But the industry won’t stop there. Their next best option takes them to the Pacific Northwest, a region known as the ‘Thin Green Line’ for its resistance to coal and oil. We’re the next battlefield.”