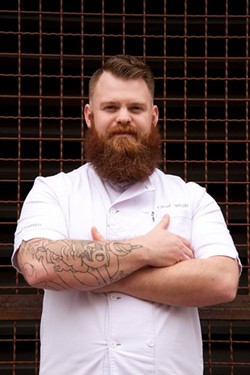 Spokane's food scene is in the midst of a renaissance, with more chef-owned eateries popping up than ever. Ripe for growth, the industry is even drawing top talent from major culinary cities who are eager to get back to their small-town roots. The latest personality to enter the Inland Northwest food scene is San Diego's Chef Chad White — also a contestant on the 13th season of Top Chef, Top Chef: California — who's coming home to Spokane to open a planned eatery called Native Post & Provisions. The Top Chef season White is competing in premieres on Bravo on Dec. 2-3, and will feature 17 chefs from across California.

Eater San Diego reports that upon his return to Spokane, Chef White is planning to open a 40-to-50-seat restaurant featuring a Northwest-centric menu, with most dishes cooked over a wood fire. The projected opening date is spring 2016. It's not yet confirmed where Native Post & Provisions is to be located.

White, an award-winning chef who trained in French and Mediterranean cuisine, has an eclectic, urban food style that's heavily Baja-influenced, but his tagline is "borderless flavor" — he doesn't box himself in to only cooking in region-specific styles.
Though he's coming back home, White said he plans to keep operating two restaurants in the San Diego-Tijuana area: La Justina in Tijuana and Craft Pizza Co. in San Diego. His Comun Taqueria in San Diego will close.