It's really easy to remember things wrong, even 9/11 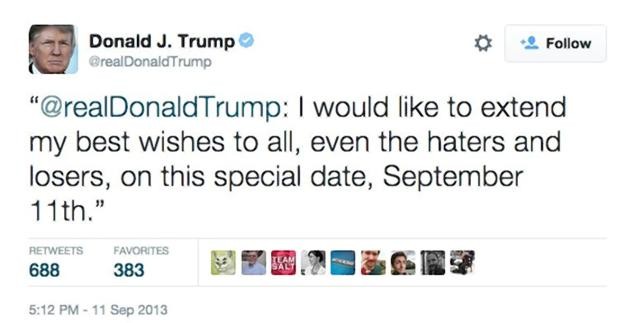 In 2013, Donald Trump shows magnanimity toward even haters and losers on 9/11
Donald Trump likes to say things. He likes to say a lot of things. And even when they're , wildly wrong, he doesn't like to admit those things he's said were wrong.

The latest in this trend is Trump's said he saw footage on TV of "thousands and thousands" American Muslims celebrating the attacks in Jersey City.

"It was on television. I saw it," he said. "There were people that were cheering on the other side of New Jersey, where you have large Arab populations."

Just as there's not any evidence that Trump was extensively quoted as an ardent Iraq War critic before the war began, there's absolutely no evidence that "thousands and thousands" of American Muslims in Jersey were shown on TV cheering 9/11. Trump has not admitted error.

Today, Ben Carson, currently second place in polling, joined in. "I saw the film of it, yes," Carson said. Which film?

But there's another possibility: They have false memories. It's easy to transfer memory from one setting to another. So seeing footage of Palestinians celebrating the attacks on the West Bank, could be misremembered as footage of New Jersey residents celebrating on the banks of the Hudson.

is what happened with Carson.)

Or they could be remembering rumors that popped up after the attacks, remembering them as truth, and them 100-fold. A Sept. 18 Washington Post story noted that “law enforcement authorities detained and questioned a number of people who were allegedly seen celebrating the attacks and holding tailgate-style parties on rooftops while they watched the devastation on the other side of the river.” Other than a few teens apparently celebrating in front of a library, most similar stories were debunked, but in the flawed memory, rumor can reify into apparent fact.

That's especially true if a memory fits in with our political beliefs. A person with a more positive view of American Muslims might be a little more skeptical of the idea that hordes of American Muslims cheered 9/11. People with views like Carson and Trump may not.

Last year, I wrote about how the podcast Serial shows just how corruptible memory can be. In fact, a lot of the research on unreliable memories deal specifically with 9/11.

You can promise to "Never Forget" 9/11. But when you remember it, you may not be remembering it accurately.


On Sept. 12, 2001, Duke University researchers Jennifer Talarico and David Rubin asked 54 Duke undergraduates questions about where they'd been when they heard about the attacks. They also asked the students to provide memories for a few everyday events.

One week, six weeks or 32 weeks later, the students returned to answer the same set of questions. It turned out that the consistency of 9/11 memories was no different than that of mundane memories. In both cases, the number of consistent details about the event dropped from around 12 one day after it happened to about eight consistent details 32 weeks later, while inconsistencies rose. Nonetheless, people felt very confident in their total recall of that moment.

Similarly, a group of memory scientists launched the 9/11 Memory Consortium, surveying thousand and thousands over what their 9/11 memories were in the years after the attacks.


The resulting set of data contained responses from more than 3,000 people in seven cities. Following up with those same people one year and three years later, the researchers found a decline in flashbulb memory accuracy that gradually leveled off after year one. In the first year, people's memories were consistent with the initial responses only 63 percent of the time. After that, however, they only lost 4.5 percent of their accuracy per year.


For example: Do you remember watching footage of the first plane hit the towers on the first day of the attacks? You may. But those memories are not accurate.


In the case of 9/11, people will sometimes claim to have seen live video of the first plane hitting the North Tower of the World Trade Center, Talarico said, despite the fact that such video was not broadcast until days after the attack.

In 2011, Scientific American interviewed Elizabeth Phelps, a New York University psychologist involved with the 9/11 memory survey. She suggests that extremely emotional events, like, say, a terrorist attack, makes you believe your memory is more accurate but doesn't necessarily improve the accuracy. You get false confidence, the worst of kind of confidence.


Emotion kind of focuses you on a few details but lets you ignore other details. And if you are highly aroused by fear, that emotion helps you store things in your memory better, in a storage process called consolidation that depends on the interaction of the amygdala and hippocampus. But what we've known for a while is that emotion gives you a stronger confidence in your memory than it does necessarily in the accuracy. Usually, when a memory has highly vivid details and you're confident in those details, that means you're likely to be right. Confidence often goes hand in hand with accuracy. But when something is highly emotional, they often get separated.

Scientific American Mind editor Ingrid Wickelgren suggests that the sort of conversations people have about an event can distort a memory further.


And as people repeatedly talk to each other about shared experiences such as 9/11, as I have, they may trigger a kind of collective forgetting that shapes joint memories. “What people forget in common is also a function of what they remember in common,” [researcher] Alin Coman says. “If a group of people forget the same things, that will increase the amount of shared information in their memories.” Such morphing of memory through conversation helps forge a collective identity in society by creating a common view of the past, Hirst believes. Other communication practices such as those propagated through the media are also likely to influence both individual and collective memory

In other words, even as media outlets rapidly debunk Trump and Carson's false statements, it's likely that such attention will only spread the myth. More and more people, especially those who look up to Trump and Carson as trusted figures, might develop their own false memories of "thousands and thousands" of American Muslims celebrating the worst terrorist attack of all time.

And that can color how they react to other issues, like letting in Syrian refugees or shutting down mosques.