Yes, college hoops is off and running, but we're going to focus on football, as this week marked the end of the season for the four-time defending Big Sky champs at Eastern Washington, the potential end of a legendary career, a scary victory for the Cougars in Pullman, and the potential starting point for the Seahawks second-half fun to the playoffs. Let's do this. 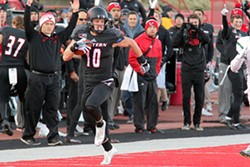 EWU Athletics
Cooper Kupp has a big decision to make regarding entering the NFL draft.
Even dynasties have years when things don't quite come together, when dominant teams take a step back to reload for another championship run. All season long, even as they won a series of squeakers against their Big Sky foes, the Eastern Washington Eagles didn't quite look like the class of the conference that the program has become over the past decade or so. Sure, receiver Cooper Kupp seemed to set records every game, but none of the quarterbacks who played were quite up to the level of departed Vernon Adams, Jr., (and with good reason — Adams is now tearing it up at Oregon since he's gotten healthy). And the defense, never great, got lit up by some teams to the point that the offense was under serious stress to keep the team in some games.

Saturday at Roos Field was the team's last hurrah for 2015. A victory over Portland State might have gotten the Eagles an at-large bid to the FCS playoffs. Instead, they lost a close one 34-31, and will miss the playoffs for the first time since 2011. Southern Utah, Portland State and Montana will represent the Big Sky this year.

While Coach Beau Baldwin gets to work on next season, Kupp has to figure out whether or not he'll enter the NFL draft. Chances are he will. 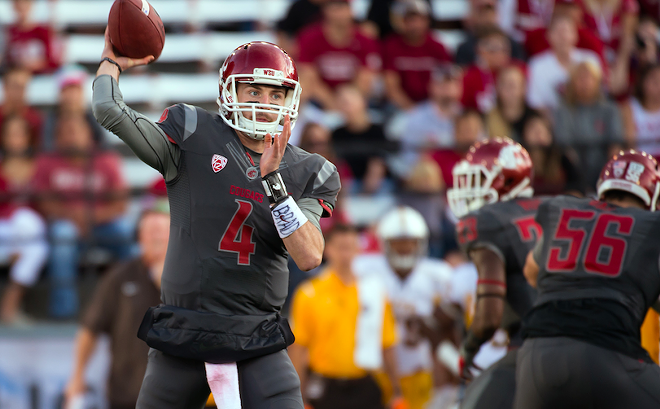 WSU Athletics
QB Luke Falk was hurt in the Colorado game, and he could miss the Apple Cup game Friday.
First, the good news. WSU continued its run through the Pac-12 with a dominant win over Colorado. The team rose in the AP poll to No. 20, and a win in the Apple Cup on Friday against rivals UW will give them a 9-3 regular season record and probably a great bowl game.

The bad news: Luke Falk was taken from the field on a stretcher, and he might not be through the concussion protocol in time to play against UW. Payton Bender, the freshman backup QB who came in to finish the game, is a fine player, but doesn't have the experience or ice-filled veins of Falk. The Huskies are an unpredictable team, so the Apple Cup could be far more exciting than it would have been with Falk behind center. The game is at noon on Friday, so wake up from your turkey coma in time for some Friday pigskin. 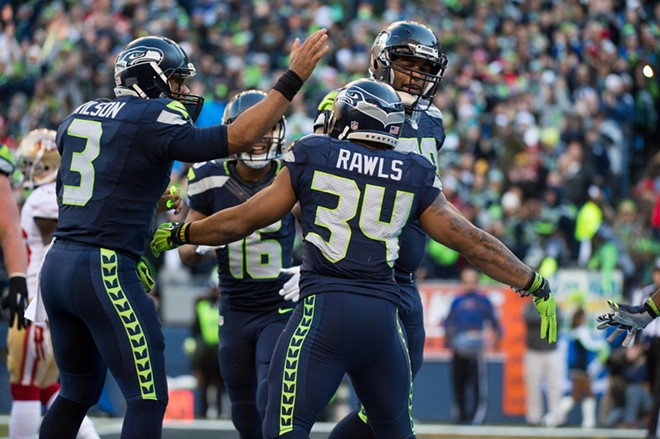 Seahawks.com
Thomas Rawls filled in for Marshawn Lynch, and racked up more than 200 yards on the day.
Granted, the Niners aren't exactly the same team that made for a great rival for Seattle when Harbaugh was stalking the sidelines in his dad pants. In fact, they pretty much suck. But it was still nice to see the Seahawks have a dominant performance for a change. No fourth quarter meltdowns. No closer-than-it-should-have-been final score. Just a whooping led by Beast Mode's backup, Thomas Rawls, who had a record-breaking day.

Russell Wilson threw for three TDs, Rawls ran for 209 yards and got 46 more receiving, and the defense didn't allow Blaine Gabbert to do much of anything.

What does it mean? Well, at 5-5 the Seahawks are in the thick of the NFC Wild Card race. There are a whole lot of 4-6 teams in their rearview mirror, and the only other team at 5-5 is Tampa Bay. Anyone else think Seattle is likely to finish ahead of Jameis Winston and Co.? The Seahawks are three games behind in the division, but the Wild Card is out there for them.

The schedule ahead isn't crazy-daunting. Pittsburgh at home this weekend and the Cardinals on the road the final week are the two toughest matchups. The other four games? The upstart Vikings, who are getting ready to swoon, the QB-less Rams at home in a revenge game, the Ravens who just lost their starting QB and RB for the season, and the Browns at home. A 9-7 final record is easy to imagine, and that should be good enough to get to the playoffs. And no one will want to be matched up with the Seahawks come January.

Stories you need to know as you start your week

It's really easy to remember things wrong, even 9/11