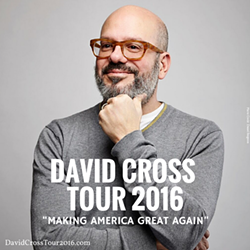 In some circles — the sane ones — David Cross is a legend of modern comedy.

Whether you know him from Mr. Show, the HBO sketch comedy show he created with partner Bob Odenkirk (and recently brought back to life on Netflix), for playing the never-nude Tobias on Arrested Development, the IFC sitcom The Increasingly Poor Decisions of Todd Margaret or any of his dozens of roles in films and television, you know Cross is one funny cat with an alternative streak that makes him a favorite among the so-called "alternative comedy" scene.

He'll be doing standup, part of his first tour in six years, when he comes to the Bing Crosby Theater on Thursday, Feb. 4. Tickets go on sale Friday at 10 am.
Here's what Cross posted to his Facebook page in announcing the tour this morning:

"Okay, enough's enough. No more dicking around! Let's do this you guys!

"I am extremely excited to get back out on the road after six long years away. I was very busy writing for The View, but now that the kids are off to college, my wife's regiment has been transferred to McMurdo Station in the South Pole, and I'm near completion on Fallout 4, it's time to start up the bus and bring my patented, fart-inducing laugh winces to a town near you. See you soon!"

UPDATE: A previously unannounced "presale" started Wednesday morning. You can buy tickets by entering the promo code "KFPRESENTS" in the appropriate box at this site.