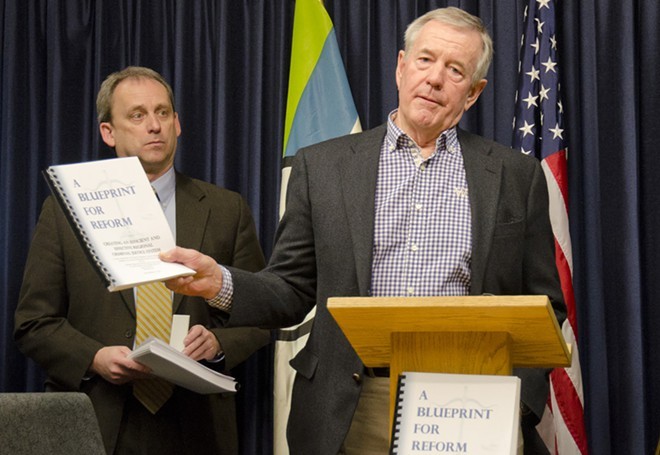 Jacob Jones photo
In a 2014 photo, Jim McDevitt holds up the final report from the Spokane Regional Criminal Justice Commission.

The meeting of the Police Leadership Advisory Committee on Monday started at 9:30. It was supposed to last four hours. Instead, it took six.

And by the end of it, Jim McDevitt, Spokane's next interim director of law enforcement, had resigned from the committee, another committee member had been replaced, and the mayor had been called in to hear the committee's serious concerns about McDevitt's appointment.

The Friday before the PLAC meeting, Mayor David Condon had appointed PLAC committee member McDevitt, the former U.S. Attorney, as the interim director of law enforcement.

"There were some folks on the committee who were quite upset, and felt that they should have had a say in who was named the interim," McDevitt says. "Of course, I pointed out that I felt like that was mission creep."

Another issue contributed to turning up the heat at the meeting: Since McDevitt had been picked as the interim head of SPD, local activists have been circulating an editorial he wrote for the Spokesman-Review responding to the Black Lives Matter movement and controversial police shootings.

"Statistics show that African-American males commit violent crimes at seven to 10 times the rates of white males," McDevitt wrote. "As a result of this high instance of crime on the part of young men of color in some areas, law enforcement there develops a 'convenient shortcut.' This mental shortcut becomes almost irresistible. It is a somewhat rational form of profiling."

For some members of the committee, this sort of rationale is outrageous. Last Friday, Blaine Stum — Snyder's former legislative aide who had been serving on the committee since Snyder left the council — linked to the editorial on Facebook, with his thoughts.


This is what the now Interim Director of Law Enforcement for the City of Spokane wrote LAST YEAR.

During our discussions on PLAC, he tried to insert prejudicial language similar to this article in a paragraph about disproportionality in the criminal justice system. Specifically, he wanted to reference "broken families" in communities of color; apparently unaware that CDC research shows Black fathers actually spend more time doing routine parenting activities with their children than white fathers.

To elevate anyone to Director of SPD (even as an interim measure) who holds this view greatly concerns me.


These are the opinions of the newly appointed Law Enforcement Director of the Spokane Police Division. What do you think we can expect under his leadership?

In 2014, McDevitt also appeared to praise the controversial prosecutorial decisions surrounding the grand jury process in the Darren Wilson case in Ferguson, Missouri.

Stum says he's clashed with McDevitt before, when McDevitt wanted to put language about "broken families" into the PLAC recommendations. But at Monday's meeting, it became a central point of conflict.

“I have concerns about the appointment of Jim McDevitt as the law enforcement director because of his expressions that the poverty and 'broken homes' — as he called them — are the reasons for increased criminality within African-American young men," Quarles-Burnley says.

In particular, she was very bothered by the line about a "rational form of profiling."

“I think that’s abhorrent," Quarles-Burnley says. "He just doesn’t have an understanding of racism in this country, and how that affects who ends up in jail and who gets charged. I’m concerned he may have a negative impact on the practices, policies and procedures of the police department."

McDevitt took exception to this line of criticism.

"I said, I think you’re pulling things out of context. I think that you’re ignoring a long career in law — and the military and in the Justice Department — of fair and equal treatment for everybody," McDevitt says.

McDevitt had initially been involved in the prosecution of Karl Thompson, the Spokane police officer who was convicted for beating developmentally disabled janitor Otto Zehm. But instead of citing that case as an example of his ability to hold the police department accountable, McDevitt declines to talk about it all.

"I’m not going to discuss the Otto Zehm case. That’s history, that’s 10 years old," McDevitt says. "You’ll have to come up with some new material. To continue [dragging] the department through the mud over that is like ripping scabs off old wounds."

McDevitt says that his thoughts in last year's editorial had been cut down by nature of the newspaper's word count limits, and failed to communicate the full nuance to his position.

"I think I said, you know, you can think what you want to think," McDevitt says. "I’ll stand on my record and I won’t have my integrity be questioned."

"He got very heated and grabbed his stuff," Stum says. "He said he wasn’t going to allow anyone to question his integrity and then resigned from PLAC and walked out."

"He seemed angry," Quarles-Burnley says. "Like, walking off in a huff."

But McDevitt says the tiff over his editorial was a minor issue, and the real reason why he stepped down from the committee was a more practical one. As the current interim director of law enforcement, playing a role on the committee that outlines the criteria for choosing the next police chief might be a conflict of interest.

Mayor Condon was asked about that conflict when he officially announced last week that McDevitt would take over. He said that since the committee had already handed in its recommendations for police chief qualifications, McDevitt's appointment wasn't an issue.

"I sense it’s a conflict of interest," McDevitt remembers saying. "Maybe it’s best that before you take a vote I will step down... I didn’t want to taint the process."

Once McDevitt left, however, the underlying conflict hadn't been resolved. Committee chair Mary Ann Murphy called Condon to tell him the committee needed to speak with him.

“[Mary Ann] said we need to discuss our concerns over the way he handled the appointment with Jim McDevitt,” Quarles-Burnley says. “And how that flies in the face of the recommendations we had made.”

Condon got in his car and drove over to the NATIVE Project to hear the concerns of the committee. They mostly discussed the concerns about the appointment process and the choice of McDevitt. After he arrived, Condon announced he was replacing Stum — who'd been there as a temporary replacement for Jon Snyder — on the committee with City Councilwoman Lori Kinnear.

Condon also listened to the group's frustrations and shared his own point of view.

“He was expressing his side and his view of why he made the decision,” Quarles-Burnley says. “He didn’t want the organization to remain leaderless and he felt like Jim had shown good leadership qualities, [including having] been appointed by two different presidents.”

But many of the committee remained skeptical.

"I have a hard time believing there was nobody with the PD or nobody else in the civilian world to take on the role of chief of police or director of law enforcement who didn’t hold those sorts of views," says Stum.

Quarles-Burnley says she's left feeling the issue has been unresolved.

"If you appoint someone that doesn’t meet any of the qualifications that we’ve recommended, even if it’s an interim person, it’s disregarding all the work that we’ve done," Quarles-Burnley says. "[I'm] worried that the appointment of Jim [McDevitt] is going to be a distraction from our ability to put the best candidate in place for a police chief."

Politics has, unavoidably, intersected with the police department over the last year. But McDevitt wants no part of it.

"I have no political agenda. I didn't seek this job, but I will do it for the department and the community... I'd like to be part of a healing process," McDevitt says.

Get your panties in a wad — for a good cause