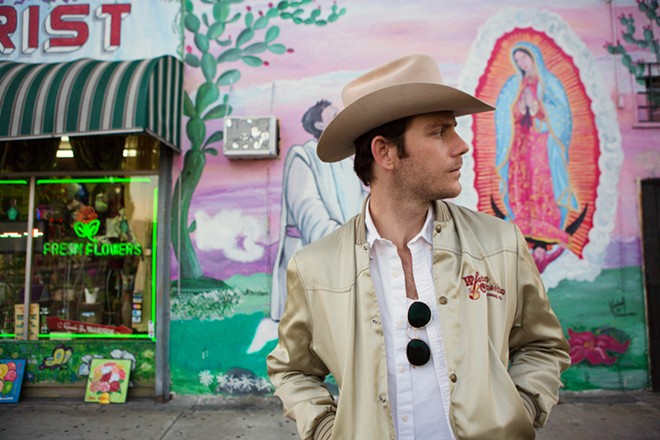 Sam Outlaw headlines Wednesday at The Bartlett.
Bam, just like that, we're hitting March this week. Spring is just a few weeks away, so let's finish of winter with some good times, as found in our event listings and Staff Picks.

Here are some great options in the week ahead:

LIVE BANDS | Often, there’s no style of music more joyful than bluegrass. Whether you’re talking traditional, Bill Monroe-style picking or “newgrass” experimentation, get certain musicians together with fiddles, banjos and mandolins and you have the makings of a sweaty night of smiles and stomping. San Francisco’s Brothers Comatose, led by brothers Ben and Alex Morrison, have been creating joyful noise and memorable nights for years, as opener for like-minded acts Devil Makes Three and Yonder Mountain String Band, and as headliners in their own right. Monday, they're joined by The Easy Leaves for a show at The Bartlett. Here's a little sample of their sound:

FILM | The  Spark Center hosts a Filmmaking Workshop, where you'll learn from local experts for just $5.

WORDS | The University of Idaho kicks off its annual Hemingway Festival, this year focusing on Papa's love of Cuba. Timely! Events run through Saturday.


LIVE BANDS | One of the hottest young Americana artists in the country is headlining a show at The Bartlett. Sam Outlaw delivers what he calls “SoCal country,” a sound that touches on the traditional honky-tonk of Bakersfield’s Buck Owens as well as the later country-tinged California rock singers. On Wednesday, he'll be joined by Whitney Rose and locals Cursive Wires. Here's a sample of Outlaw:

FOOD | The Yards is hosting Got Game?, a special dinner of game dishes and wine pairings featuring Chef Adam Hegsted, recently nominated for a James Beard Award, and guest chef and Top Chef contestant Chad White. It's $95, and reservations are required.

FOOD/VISUAL ARTS | The Steam Plant is hosting a Centennial Celebration from 5-8 pm, including the debut of a new art show by the Inlander's own Chris Bovey. Consider it a must-stop as part of First Friday.

FOOD | It's launch day for the 2016 Riverkeeper IPA from River City Brewing. Hit a big party at the Numerica Credit Union in Wandermere and support the Spokane Riverkeepers with a tasty beverage.

BENEFIT | Head to the Greyhound Park to support the Post Falls Education Foundation at the Wine, Stein & Dine 20th Anniversary party, featuring wine, beer, cider and appetizers as well as live tunes and raffles, all to fund classroom equipment and materials for area kids.

Emails between cops, carbon tax, fascist tweets, Oscars and other news to start your week