Envision gets warning letter for violation of state election laws 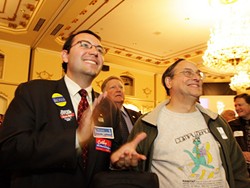 Michael Cathcart, who lead the campaign against the ballot initiative, says the public was denied important information because of Envision’s delays in filing documents with PDC. He also says it’s part of a pattern by Envision, which did not respond to the Inlander’s request for comment.

“We’re not satisfied because they were given very similar warning in 2010 [for a separate ballot measure campaign] and they are violating the same rules again,” says Cathcart, who works as the lobbyist for the Spokane Home Builders Association; he filed a complaint against Envision with the PDC. “It seems like we should be beyond warning at this point.”

Specifically, the PDC determined that Envision Worker Rights (an offshoot of Envision Spokane, which qualified its Community Bill of Rights three times before its most recent effort was struck down by the state Supreme Court earlier this year) failed to file eight financial contribution reports within the required five business days of their receipt. It also determined that Envision sponsored two advertisements that didn’t include language on the campaign’s top five contributors as required by law. But the PDC declined to issue any fines.

Cathcart says the repeated violations matter because Envision received a $10,000 campaign donation from James Sheehan, who helped found the Center for Justice, on Sept. 28 that the campaign didn’t disclose until October 8, three days past the date disclosure is required under state law.

Cathcart’s complaint also notes that Kai Huschke worked as Envision’s volunteer campaign coordinator and a contractor with the Community Environmental Legal Defense Fund, a Pennsylvania law firm. The complaint argues that Envision should have reported Huschke’s work on the campaign as an in-kind contribution. It also complained that Envision violated “terms of use” agreements on stock photos it used in campaign materials.

The response from the PDC found “no evidence” concerning the allegation that Envision failed to disclose anything about staffing, and concluded that the stock photos issue fell outside of its purview. It issued a warning letter to Envision for not disclosing its top five contributors on a mailer, but didn’t take action on the late filing of campaign contributions because they were reported before ballots were sent out.

“If [a campaign] can get reports corrected and it’s a small percentage of overall receipts and expenditures, then chances are they will get a letter saying ‘don’t do this again’ or ‘thank you for correcting it,’” she says.

But Cathcart says this approach is a problem.

“We have a Public Disclosure Commission for a reason,” he says. “The public has a right to know what’s going on with these ballot committees.”

Happy Hour of the week: An upscale dive bar experience at the Backyard

Also not talking to the Straub investigator? The city attorney who was repeatedly warned about Straub