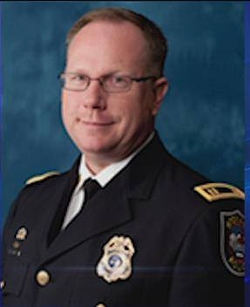 When a senior officer of the Spokane Police Department thinks a decision is a mistake, is he allowed to express his opinion publicly?

That question was raised during the internal investigation into Spokane police Capt. Brad Arleth's decision to move furniture from the previous downtown police precinct — in the Peyton Building near the STA plaza — to the new location at the Intermodal Center.

Ultimately, Arleth was given a written reprimand for insubordination and was on paid administrative leave for a month pending the investigation's completion (his monthly salary last year was about $11,000). Arleth is appealing the decision with a grievance letter from the Lieutenants and Captain Association.

During interviews for the internal investigation, Asst. Chief Craig Meidl said that he did not think it was appropriate for Arleth to share concerns with the Business Improvement District board that crime would increase as a result of the move. During Arleth's interview, Arleth said that, after sharing his objections to moving the police precinct to the Peyton Building, he was called into then-Interim Chief Rick Dobrow's office, and told that his comments were "not helpful."

Arleth, upset that he was being chastised for going against the "company line," said that he was not going to be a "cheerleader for somebody's bullshit."


Transcripts from internal affairs interviews not only highlight internal arguments about the move to the Intermodal Center, they also show widespread confusion about the decision and what furniture could or could not be moved, among the leadership in the police department.

The plans for the downtown precinct continued to change dramatically over the summer, Arleth said in his interview. He said that, during this summer, there was actually a plan to move the South Precinct, manned by Capt. Dave Richards, not the downtown precinct, into the Intermodal Center.


But that plan was also put on hold, according to Arleth. Arleth said he wasn’t told about the final plan to move until  after Straub had been ousted.

Arleth said he objected to being “bounced all over the calendar as far as when we were able to move.” He says that CompStat and Senior Command Staff notes would show how many different times they were told different things about the downtown precinct and the Intermodal Center.

Arleth said his "professional opinion is that we shouldn't move." But he told Dobrow that ultimately could work anywhere. His complaint had more to do with the lack of communication.

Toward the end of their IA interview, Major Justin Lundgren bore in on whether Arleth had ever spoken out “publicly about or oppose the move in a disparaging way.”


And he also mentioned during a Business Improvement District meeting that he disagreed with Business and Developer Services Division Director Scott Simmons' positive assessment of the move. He mentioned he had over 23 years, throughout every rank, working on policing downtown. He said he saw the sort of impact that the downtown precinct, near the STA building had on crime.

Within about a week after his comments, Arleth says, Dobrow pulled him into his office. Arleth assumed Simmons had told City Administrator Theresa Sanders about their conversation.

"[Dobrow] closed the door and told me that my comments about downtown were not helpful and I asked him what comments?"

Arleth says Dobrow explained he was referring to Arleth's "personal comments" the BID board. Arleth, however, considered them his "professional opinion." They had discussions about the "company line," according to Arleth.

Asst. Chief Craig Meidl's interview also underscored the departmental confusion about when and where and how the downtown precinct was being moved. But asked if it was appropriate for Arleth to speak publicly raise concerns that crime would increase as a result of the move, Meidl says it wasn't.

“No. It’s quite the quandary because on one hand, I think we need to be completely honest with folks, but on the [other] hand you also need to, you know, show support for the goals and objectives of the police department.

Meidl also said it would be "disingenuous to say crime would go up" if the officers were moved to the Intermodal Center.

But Downtown Spokane Partnership President Mark Richard says it's crucial for command staff members like Arleth to be able to speak their minds.

"We rely really heavily on the experience and the relationship we have with [Capt. Arleth] and his entire team.The captain has more than 20 years of experience in downtown policing. We rely on our relationship with him and his professional opinion," Richard says. "It would be extremely problematic to us — and on behalf of the businesses who pay for us to function — if we weren’t able to have these honest or frank discussions."

"We’re dealing with really complex, sensitive politically-charged issues a daily basis," Richard says. "I hope that he’s got an environment where he can speak freely and he can share his professional opinion and we can rely on that daily."