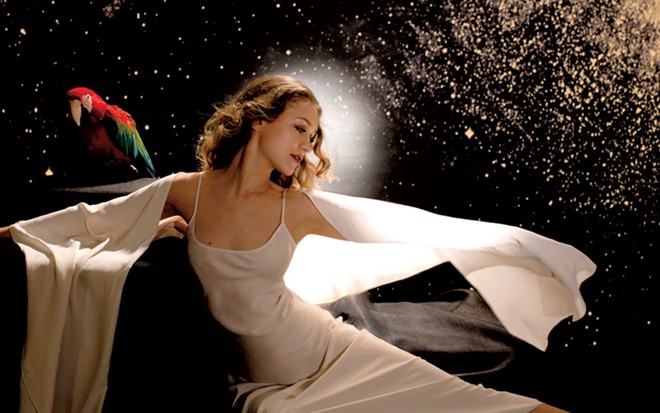 No one was allowed to take photos or video during the Joanna Newsom show last night. One usher was especially vocal in telling people to put their phones away.
When a show is scheduled to start at 8 pm at the Bing Crosby Theater, then you better have your butt in the cushy, fold-down seat before then. Unlike other music venues, concerts start on time here. But last night, the doors weren’t even open by 8 pm and lines, filled with bearded/bunned men and vintage dress-wearing women, wrapped around the block. Later, Joanna Newsom would apologize from the stage, saying there were technical difficulties during set up — but the strange and magical show was well worth the wait.

Once finally sitting behind her harp, the pony-tailed singer-songwriter led her band of players through many of the songs off her new album, Divers, as well as fan-favorites, like a much more approachable rendition of “Peach, Plum, Pear.” Each song was its own carefully coordinated, miniature symphonic work. Depending on the piece of equipment needed — her five-piece (which included at least two family members) played a bevy of instruments from banjo and viola to recorder and trap set — the musicians rotated around the stage. Newsom, too, switched easily from harp to grand piano, sometimes even during one song, which was achieved with her Britney Spears-esque face mic.

She was gracious after each tune, but there wasn’t much banter — although she did make a joke about how they were calling her "Sapokanikan" song, “Spokanikan” for the night.

In person, Newsom’s vocals aren’t as harsh as they come across on recordings. With the Bing’s exceptional acoustics gloriously revealing her voice, it was at once angelic but also almost feline in nature. Her harp playing was strong and bold. With arms swimming through the air, it looked like she was attempting to rip out her soul with her fingers. Fleet Foxes frontman Robin Pecknold, who opened the show, described Newsom as the best musician alive, and last night she absolutely proved her genius.

Newsom has tricked people. Those who may not think they like modern classical music were listening to just that at last night’s concert. And just like going to see a symphony or opera, the audience had a mix of reactions: grinning from ear to ear, tears streaming down the cheeks and, yes, one aisle over there was even a guy sleeping (at most classical concerts I attend, there’s the obligatory person nodding off, even snoring).

Her last two songs, which included Pecknold on clear-cutting vocals, “Time, as a Symptom” and the “Good intentions Paving Company,” left us in a state of happiness, the final song in particular, was almost rockin’. The audience was immediately to their feet after the final notes.

And as if she heard my hopes and prayers, Newsom and Pecknold came out for an encore and played the simple and sweet “On A Good Day,” my favorite.

First Friday is tonight and it's the warmest day of spring so far, so get outside!