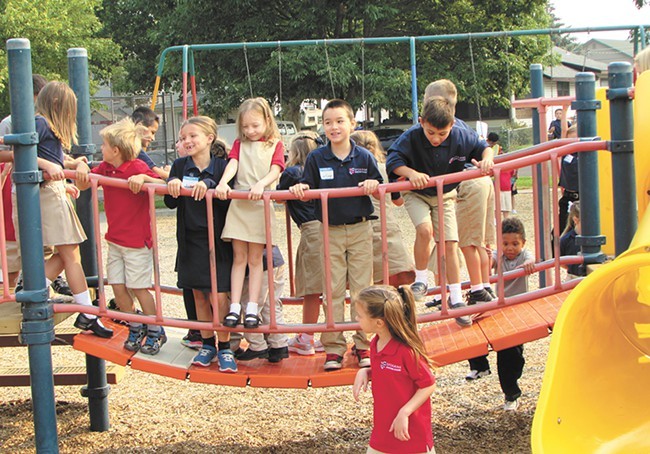 Daniel Walters
Kids at recess on the first day of school at Spokane International Academy last fall
You didn't think charter schools would be made legal again in Washington without a fight, did you?

On Thursday, the Washington Education Association announced it would join a lawsuit challenging the constitutionality of a law passed last week that aimed to save charter schools from shutting down. Spokane has two such schools: Spokane International Academy and PRIDE Prep. (PRIDE Prep was featured in this week's Inlander.)

Here's some background: In 2012, charter schools were passed into law by voters. Last year, the Washington state Supreme Court ruled such schools were unconstitutional because they don't have public oversight from elected boards, and therefore should not receive money from the state's general fund. This year, state lawmakers, backed by a $1.9 million lobbying campaign, crafted a bill that shifts funding for charters to another account, making charter schools legal again.

That bill was sent to the desk of Gov. Jay Inslee's desk, who does not condone charter schools. He was caught in a tough position. He faced pressure from the Washington Education Association to veto the bill, but he didn't want to shut charter schools down and force 1,100 kids and their families to find another school next year. So he did neither, which meant the bill became law.

"However, I remain deeply concerned about the public accountability and oversight provisions of this bill. At its foundation, our public school system relies upon locally elected boards to oversee the expenditures of taxpayer money. This bill provides an option for similar oversight, but would ultimately allow unelected boards to make decisions about how to spend public money," Inslee wrote April 1.

A week later, the WEA announced it would join "a coalition of public school educators, administrators and labor unions" and put up a fight against the bill. They argue that the new law has two constitutional flaws: it allows unelected charter school operators to spend public money without adequate public oversight or accountability, and it funds charter schools with lottery money that is diverted from the state general fund, which is the main source of funding for the state's public school system — a public school system that has been ruled criminally underfunded.

"This law still does not meet our state's rigorous standards for funding, accountability or public education," Said WEA President Kim Mead. "It shortchanges the more than one million public school students who are still waiting for the state to meet its constitutional obligation to them and their education."

Charter school advocates argue that charters do not take away money for public schools because the money follows the students. It's the same as if students switched districts, days Brenda McDonald, founder of PRIDE Prep.

The SPS authorization still doesn't mean the charters are overseen by an elected board, but it does give the district power to terminate the agreement if the schools aren't meeting certain requirements, said SPS chief academic officer Steven Gering.

Teachers unions in the state feel that is not enough oversight to warrant taxpayer money. The lawsuit may take two months to prepare and file in court. Seattle attorney Paul Lawrence, the same attorney who argued against the 2012 charter school law, is the lead attorney on the case.

Alert the skiers: Last chance for some spring skiing

CONCERT REVIEW: G-Eazy serenades a sold out show at the Spokane Arena