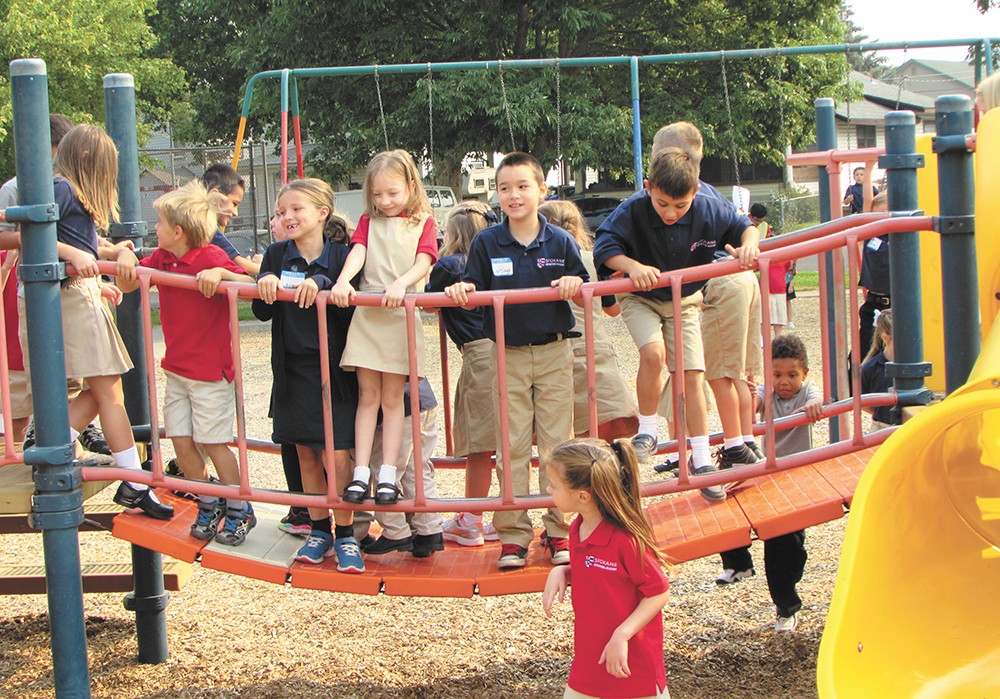 Daniel Walters
The scene at the first recess ever at the Spokane International Academy.

It's the first day at a new school for Brayden Goldner. His mom and his dad look on proudly as the little blond first-grader stands on the school's concrete steps, wearing slacks, dress shoes and a blue polo shirt bearing the official Spokane International Academy logo.

"I went to Sheridan [Elementary] last year for kindergarten," Brayden says. "I used to have more friends at Sheridan." But with the unshakable confidence of a first grader, he knows he'll make more.

In fact, last Wednesday (Aug. 26) is the first day at a new school for everyone here: the first day of the first-ever charter school in Spokane. Until an initiative narrowly passed in 2012, charters — schools that use public funding but have their own governing structure — were illegal in the state of Washington.

Charter schools, like traditional public schools, are tuition-free. But spots are limited. The parents dropping their kids off today had to win a random lottery for their kids to enroll.

"I'm gettin' real tired of the public school system, and the way it's operated," says Max Goldner, Brayden's dad. He has another other son attending PRIDE Prep, the project-based charter school for sixth- through 12th-graders also opening this year in Spokane. "We just thought they weren't getting the education that they deserve."

For seven years, the school has been a dream of founder Travis Franklin, and he's only 31. He called in every favor he had to make this happen. And there's a chance it could fail.

The extra freedom given to charter schools to experiment can lead to success or utter disaster: The first charter school in Washington state — a former private school for homeless children called First Place Scholars of Seattle — was plagued by financial problems, misused funds and mass staff resignations. It narrowly survived being closed.

For Franklin, after a year and a half of planning and strategizing, today is a chance to test-drive his plan in the real world.

At breakfast, a gaggle of kindergartners petitions passersby to help them solve the inscrutable puzzle of opening their cardboard milk cartons. The first graders, already masters of the milk-opening game, go straight for their Trix cereal.

Eventually, the school will stretch through the eighth grade. But for now it's just kindergarten, first and sixth grades.

"We wanted to dive into middle school right away," Franklin says. "Sixth grade is such a hard time in everyone's life. It's the worst time in a kid's life to not be known." He would know. He used to teach sixth grade at Shiloh Hills Elementary.

Here, the middle-school-age kids are the student leaders of the Academy. They're told they've been tasked with the sacred charge of helping the younger kids.

As sixth-grader Isabela Cruz cleans up milk she spilled, the accident hasn't dampened her enthusiasm. 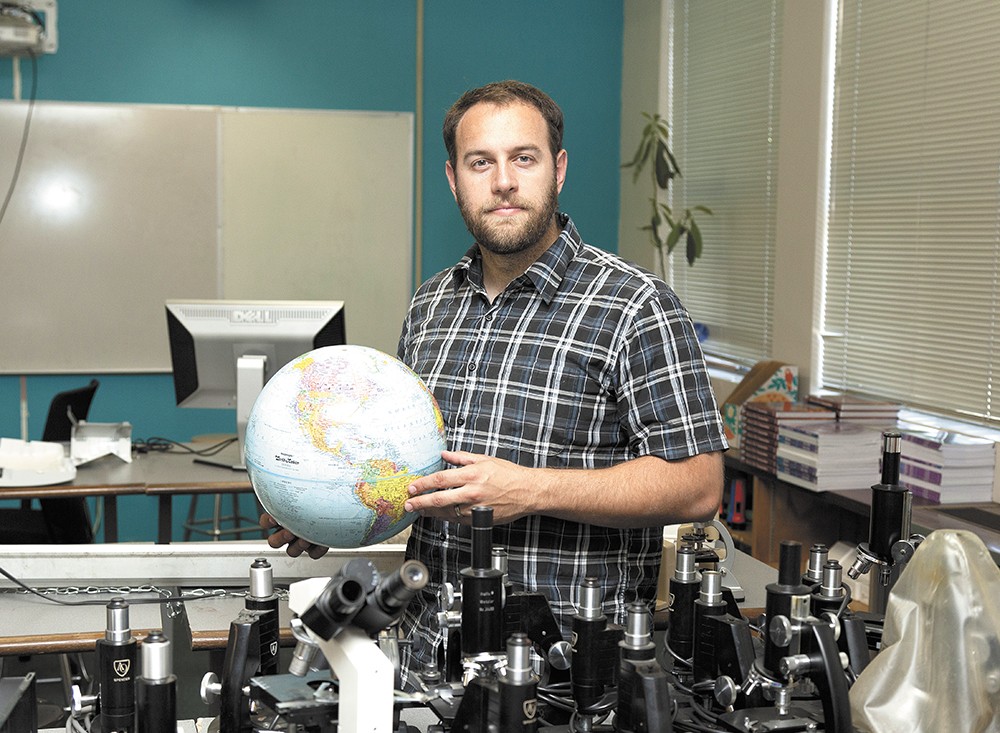 Most students in Spokane won't learn a word of Spanish before high school. But at Spokane International Academy, it's possible for students to learn everything high school Spanish has to offer, through the accelerated online curriculum, before they hit ninth grade.

Even in kindergarten teacher Sarah Morgan's class, cutouts of colored paint splotches hang from the ceiling with words like "green" or "yellow" on one side, and "verde" or "amarillo" on the other.

This is the "international" part of Spokane International Academy. Though these students will still take the same standardized tests as the rest of Washington state, the school teaches the Cambridge curriculum taught in more than 160 countries. Flags of the world line the hallway at the entrance. There are students enrolled who were born in Spokane, but also from Nepal, India and Russia.

Sixth-graders study ancient civilizations like Greece and Rome. Kindergarten's all about North America, while first grade is all about South America. Paper vines hang down from the ceiling of teacher Aleisha Larsen's first-grade classroom, and each table is given the name of a South American animal.

"They will learn a different animal every month and a different country every month, and they'll learn that through their five senses," Larsen says. "I will have a guy bringing in a baby leopard, and they will smell it and pet it and touch it."

Larsen used to go to school here. Specifically, she once attended St. Patrick's Catholic School in this building. But the Catholic diocese shuttered the century-old private school in 2013. It turned out to be the ideal spot for the Academy.

Locating in the St. Patrick's building put the charter school in the middle of Hillyard, a few blocks east of Rogers, the high school with the poorest population in Spokane. In this neighborhood, yellow weeds dominate lawns, paint chips off concrete porches and signs proclaim "BEWARE of DOG." Green graffiti mars the crosswalk sign across from the Academy's entrance.

For Franklin, the founder, it's perfect. Since charter schools can only enroll students by random lottery, to get the broad array of students Franklin wanted — including refugees and low-income students — the right location and recruitment strategy was crucial. Franklin met regularly with refugee families from World Relief. He embedded himself in the Hillyard community and joined community boards and business groups.

"When I talked to people in the neighborhood, they're excited this is a school again," Franklin says.

Kindergartners and first-graders flood the monkey bars and swings for recess. Two kids squat over a pile of dirt, bickering over the possession of a tiny red ant they've discovered. One pays a price for his hubris — and Franklin leads him off to the office to treat a particularly itchy red-ant bite.

"So what do you think about playing with the ants?" he asks the student as he leads him back to his class. "Probably not, right?"

The kindergartners and first-graders at Spokane International Academy have three recess breaks a day. With an extra-long eight-hour school day four out of five days of the week — exhausting for teachers, really exhausting for 5-year-olds — breaks are crucial. But those extra hours can be worth it.

"If a student stays with us all nine years, they get almost an extra year-and-a-half of school," Franklin says, comparing the Academy to the state-required minimum. In a conventional school district, such a long day would have to be union-bargained. But as the Spokane Education Association gears up for a possible teachers union strike on Friday, Spokane International Academy doesn't have to deal with such complications. So far, the charter doesn't have a union.

"They can form a union if they want to," Franklin says. "But we hope to create a place where you don't need to, right?"

First-year teachers at the Academy get paid more than at Spokane Public Schools, starting at $38,000. But Franklin doesn't think the extra pay is the appeal. It's the expanded freedom they have to build a school around their passions.

"It's kind of like owning a piece of a company," Franklin says. "They have to really, really want to do what they're doing. It's not easy."

And these teachers do. Mary Himley, a 55-year-old sixth-grade teacher and amateur beekeeper with spiky blond hair and arms covered in tattoos, stands in the garden she created out back. Tiny pumpkins have already started growing. So have the tomatoes and the perennials.

"We've already picked, like, 15 cantaloupes and have given them away," Himley says. Soon, they'll begin using them in the lunches. "The kids will come out and pick beans tomorrow. The potatoes are ready. We'll dig them on Friday."

An avid environmentalist, she's putting worm bins in every classroom, and starting a composting program. In October, she'll be taking the entire sixth grade on a trip to NatureBridge Olympic Park in Port Angeles.

The day marches on. Dean of Students Brian Maney leads a kindergarten class in the ABCs on his guitar. In art class, first-graders draw self-portraits — mostly variations of stick figures. Soon, the students have lined up on the blacktop, waiting for their parents to pick them up. One exhausted kindergartner is bawling inconsolably. But others couldn't be happier.

"I loved it," Cruz says, smiling broadly. "I like how my teacher, Ms. Himley, she really talked about other cultures. That's really what I love about this school."

The best thing? Tomorrow, she gets to go again.♦