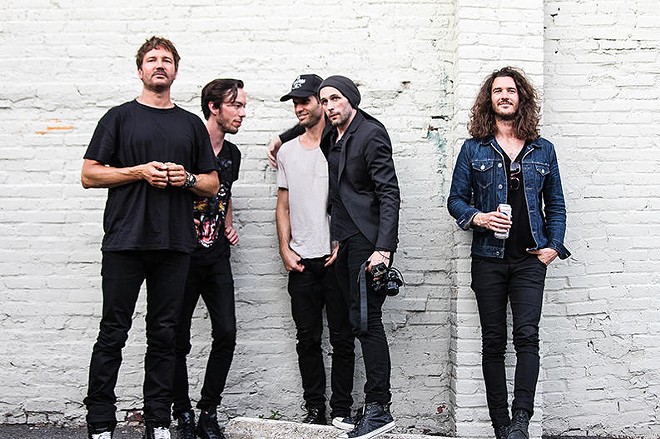 Third Eye Blind headlines Wednesday at The Knitting Factory
I think we can all agree that spending as much time as possible outside is the goal now that it's warm. But that doesn't mean there's not plenty of great stuff happening to bring you back indoors, and you can find them in our event listings and Staff Picks.

ETC. | Start your week with a little mindfulness and restorative relaxation at the Buddhist Meditation Classes being taught by Tibetan Buddhist nuns from Sravasti Abbey Buddhist monastery. Free, but donations will bring you good tidings.

PERFORMANCE ARTS | You want to know if you're a serious partier? Be in the audience for the Thunder From Down Under on a Tuesday night. THEN you're partying serious.

WORDS | Get Lit! is off and running by Tuesday, and there are plenty of great options at the annual literary festival, including Tuesday night's book launch featuring Shawn Vestal and Sam Ligon. Read our story about Vestal's new novel here, and read Ligon's recent contribution to our Distilled series here.

LIVE BANDS | Third Eye Blind is having a moment years after I'd left them for dead. The pop-rockers are playing a packed Knitting Factory show, joined by Bad Bad Habits. Here's my favorite of Third Eye Blind:

COMMUNITY | Given the state of affairs in the world, Understanding Islam seems a really good idea to separate the peaceful religion from those who deliver violence in its name. Gonzaga professor Shannon Dunn will discuss it at a free forum at St. Joseph's Church.

THEATER | I saw Next to Normal a few years ago, and you can consider the emotionally riveting play well-deserving of its Pulitzer and Tony Awards. It's playing at the Bing in a special collaboration of the Modern Theater and Coeur d'Alene Summer Theater.

COMMUNITY | The Women's and Gender Studies group at Gonzaga are hosting a discussion of Why Censorship Matters, particularly as it impacts women. It's free and sure to be engaging.

THEATER | Nixon's Nixon continues its run at Stage Left Theater, taking audiences inside the room with the former president and his beloved confidant Henry Kissinger on the eve of Nixon's resignation. Read our story about the show here.

COMMUNITY | It might be Idaho and marijuana might be technically illegal, but that doesn't mean you can't celebrate hemp, as they will at the Moscow Hemp Fest on Saturday.

Construction season, guns in a bar, Trump complains and other stories to start your week