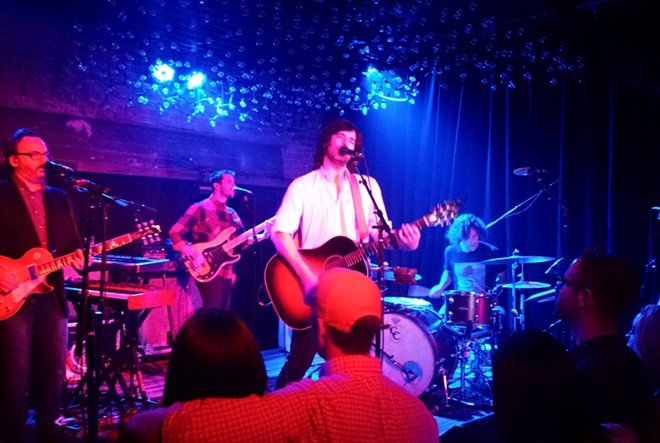 Dan Nailen
Pete Yorn played to a packed house at the Bartlett Sunday.
With his lanky frame, luxurious locks, button-down shirt and boyish looks (even post-40), Pete Yorn doesn't exactly fit the image of a blues man as he takes the stage. But his solo acoustic version of Junior Kimbrough's "I Feel Good Again" kicking off his packed show at the Bartlett Sunday was both excellent and fitting.

Yorn has a warm voice and inviting stage presence, and Kimbrough's tale of a man begging his baby to "let me come back home" and "make me feel good again" is consistent with Yorn's often-dark lyrics that are also delivered with insistent, even buoyant hooks. And fitting because after a six-year hiatus, Yorn's new album and tour (and new baby daughter at home) have him riding a professional and personal high.

While the tour is supporting Yorn's excellent new ArrangingTime set, the lengthy show hit on all phases of his career, and was particularly heavy on tunes from his hit 2001 debut musicforthemorningafter and the new release. In fact, after his three-piece backing band took the stage at the end of his solo start, they immediately launched into what could be his most recognizable song, the breakthrough hit "Life on a Chain."

That would be a bold move for any artist — most would hold on to that tune until the encore. But Yorn's set showed that the man has a long list of worthy pop-rock songs to draw on in concert, and he and his band did a fine job capturing the often-lush orchestration of their recorded versions for the Bartlett stage.

While "Life on a Chain" and other, older songs were clearly favorites of the crowd, who sang along to that one as well as "Black," "Pass Me By," "Strange Condition" and "Closet," Yorn's new music proved some of his strongest yet.

"Summer Was a Day" came early in the set, the lo-fi and somewhat delicate introduction opening into an expansive wash of atmospheric psych-pop full of harmonies that would do Brian Wilson proud. "She Was Weird" and "Roses," which he introduced as one of the first songs he wrote for the new album, made for a nice one-two punch, as did the terrific "Halifax" leading into the booming beats of "Lost Weekend" later on.

The biggest surprise of the night wasn't the strong performance by Yorn and his band — or the fact that the man apparently hasn't aged since arriving on the scene 15 years ago. It was probably the appearance of one mean Morrissey cover. "This song changed my life when I was 14 or something," Yorn said by way of introducing "Suedehead." I'd sit and play it over and over on one of those old cassette players."

It was a nice twist in a night full of solid performances, and no doubt some of the audience would say Yorn's songs have changed their lives as well. Given the strength of his new material, there seems plenty more to come.

Dolezal on Today show, WSU suspends frat and other news to start your day